I love comics. I love romance, too. When you put them together, it’s like putting bacon on pizza. It takes two inherently wonderful concepts and combines them, thereby compounding everything that makes them awesome.

I talk a lot about comics and romance. I’ve cited certain relationships that stand out in the current romantic landscape and praise certain comics that raise the bar for romance between superheroes. I think I’ve made the extent of my fondness for both fairly clear. Now, I’d like to offer some specifics.

For a while now, I’ve gotten comments and emails from people asking for recommendations of good romantic comics. I feel like I’ve contemplated this enough to craft a list of the comics I feel have the most to offer in terms of romance. While there are plenty of comics that cater specifically to romance, I’ve left those out in favor of those that offer a broader story that general comics fans can also appreciate.

What follows are my top five picks for the best romance comics. Please note that this is a personal list. I don’t wish to imply that this ranking is definitive. These are just my hand-picked comics that I feel offer the perfect blend of love and comic book level awesome. 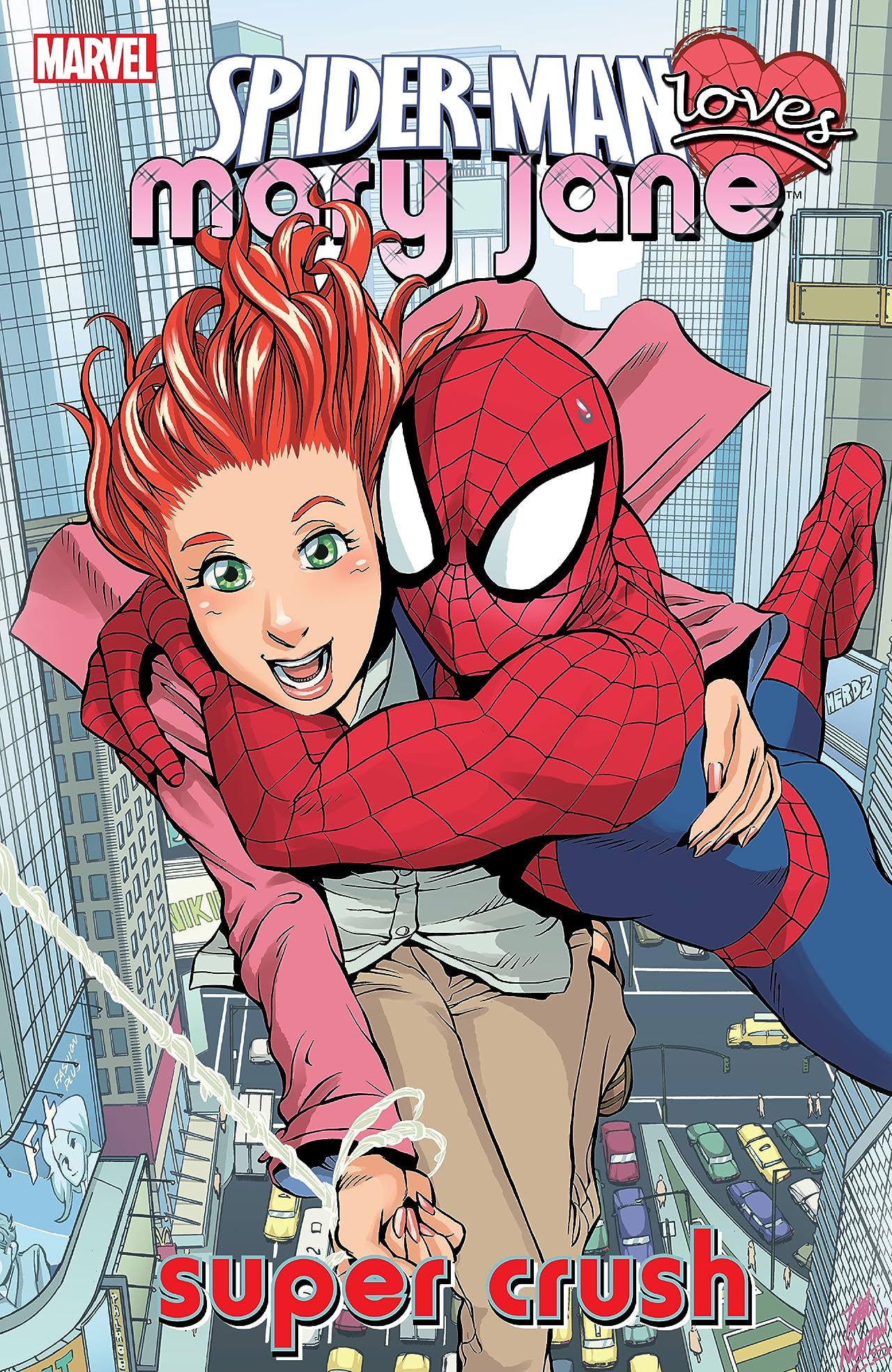 This sweet, fun little series from the mid-2000s is one of Marvel’s more underrated gems. There’s a lot of drama, angst, and frustration surrounding the romance between Spider-Man and Mary Jane Watson. I’ve cited some of the “complications” these two have endured on more than one occasion.

This series basically avoids all of that and doesn’t rely on elaborate retcons to do it. The story is less about Spider-Man and more about Mary Jane Watson. Specifically, it’s about a young, pre-supermodel Mary Jane Watson who hasn’t quite become the gold standard for sex redheaded comic book characters. That’s critical to what makes this series so great in terms of story and romance.

For once, Peter Parker being Spider-Man is secondary. That story is unfolding behind the scene, but the real drama comes directly from Mary Jane. She’s at an age where she’s blossoming into a beautiful young woman, but still figuring herself out. She’s not sure of what she wants, how to love, or where she fits into this crazy world. On every level, she’s far more relatable than any superhero.

As she navigates that world, she makes touch choices and even a few mistakes. More than anything else, though, this series shows how and why Mary Jane came to love Peter Parker so much. It doesn’t rely on overt sex appeal or excessive heroics. The story focuses entirely on chemistry and growth.

On paper, it sounds like something that shouldn’t work in a superhero comic, but it totally does. It’s a romance story that’s balanced and well-developed. It also isn’t too mature. Anyone from age 8 to 80 can appreciate the romance here. On top of that, Takeshi Miyazawa’s artwork is gorgeous, bringing light and heart to a romance that badly needs it. 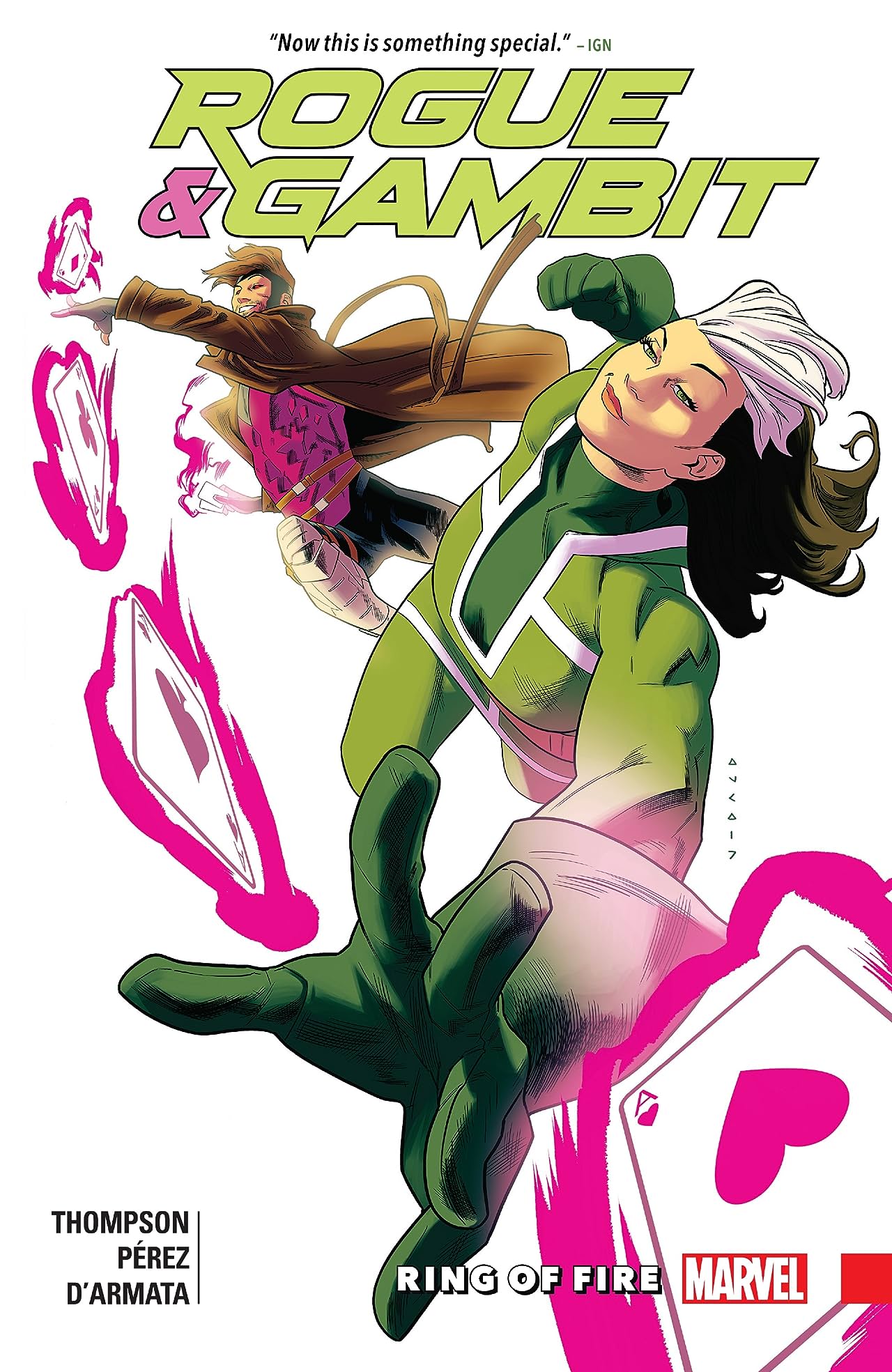 This is a very recent entry on my list, but one that did more than enough to justify its position. Over the course of five issues, “Rogue and Gambit” accomplished something extraordinary. It took a well-known romance that had been deconstructed, denigrated, and mishandled for years and effectively rebuilt it into something truly uncanny.

Kelly Thompson, one of Marvel’s rising stars, took the baggage surrounding the Rogue/Gambit relationship and channeled it in a way that felt both rewarding and sincere. It starts as an undercover mission, but evolves into some overdue couple’s therapy. Thompson doesn’t ignore all the factors that kept them apart. She even lets them argue and agonize over them.

In doing so, this series presents this romance as one you won’t find in any fairy tale. This isn’t a case of star-crossed lovers destined to be together. It’s a romance in which the two people involved have to really work at it. They have to confront their flaws, their failures, and all the excuses they’ve made to avoid their feelings. It gets ugly, but beautiful at the same time.

I would go so far as to cite this series a template for how a modern superhero romance can work, even without an iconic legacy. The Rogue/Gambit romance isn’t ideal, but that’s exactly what makes it so enjoyable and endearing. These are flawed characters who have both found themselves playing villainous roles at some point in their history. Them coming together despite all that just feels so right.

The only reason this series isn’t higher on my list is because it’s so recent. It’s also still evolving through a companion series, “Mr. and Mrs. X.” I’ve reviewed and praised that series too, but it wouldn’t be possible without this series. Whatever complications the Rogue/Gambit relationship faces in the future, this series will remain one of its most defining moments.

Number 3: The Adventures of Cyclops and Phoenix 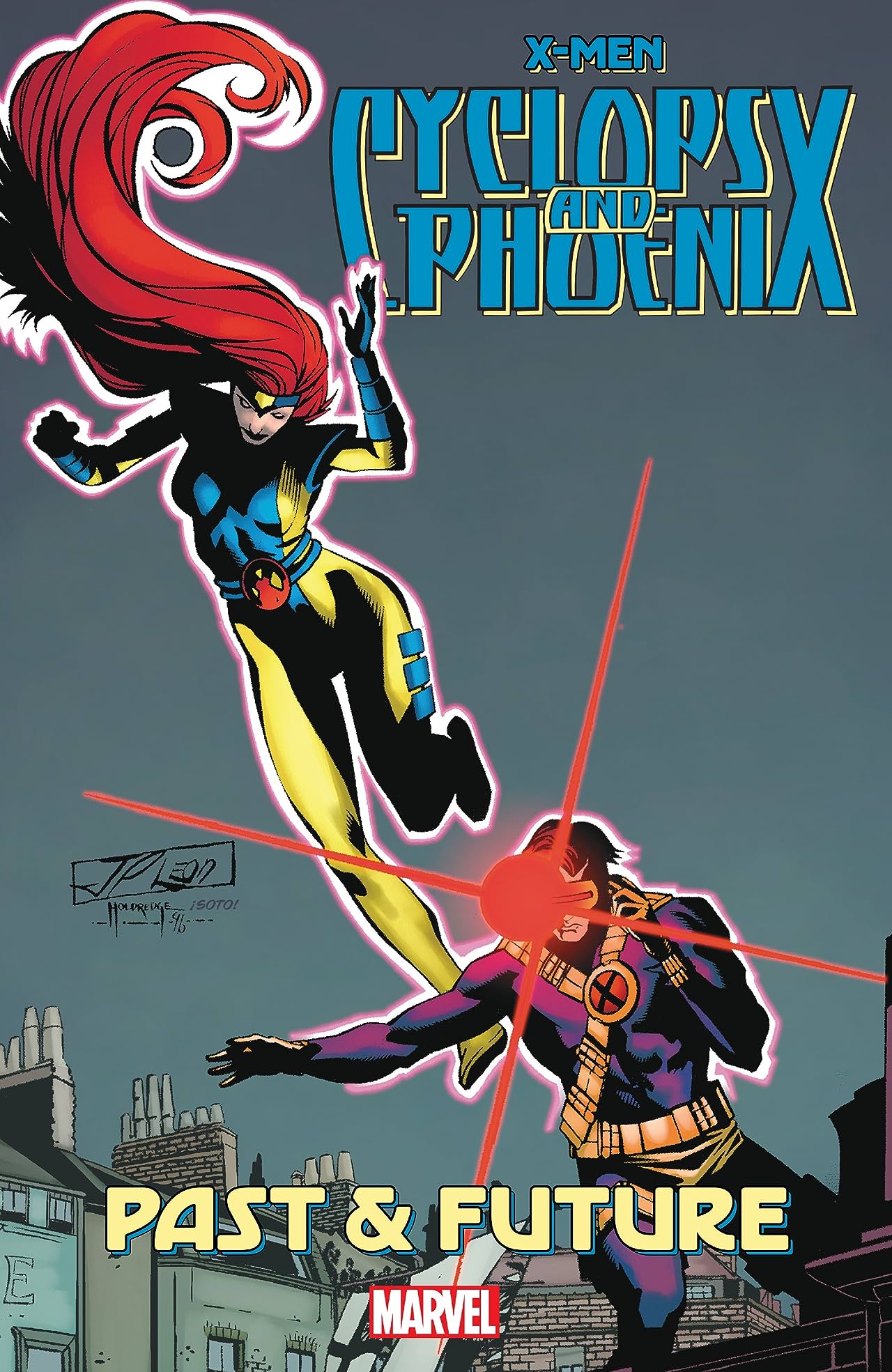 I’ve made no secret of how much I love the romance between Cyclops and Jean Grey. I’ve cited them as one of those uniquely special relationships that is both iconic and balanced, a rare combination for a romance that has been unfolding for over 50 years now. While they’ve endured plenty of tribulations, complications, and retcons along the way, they remain iconic for a reason.

This series from the late 1990s is a testament to just how strong their romance can be when retcons, cosmic forces, and terrible love triangles are set aside. At their core, Cyclops and Jean Grey are two people don’t just want to love each other. They want to create a better world for their friends, their family, and their future children. They get to do all of that and then some here.

Much of the story takes place in one of the many dystopian futures that plague the X-men, namely one ruled by Apocalypse. It puts Cyclops and Jean in a position where they can’t fall back on their fellow X-men or the support of other superheroes. They have to navigate this wasteland of a world with only each other to fall back on. It’s a true testament to the strength of their relationship.

As the title implies, though, the story emphasizes the adventure more than the romance. While there are plenty of sweet moments between Cyclops and Jean, their relationship is not the primary focus. It’s certainly a factor driving them forward, but the meat of the story is how it drives them through the conflict. If you enjoy adventure with your romance, then this is definitely the series for you. 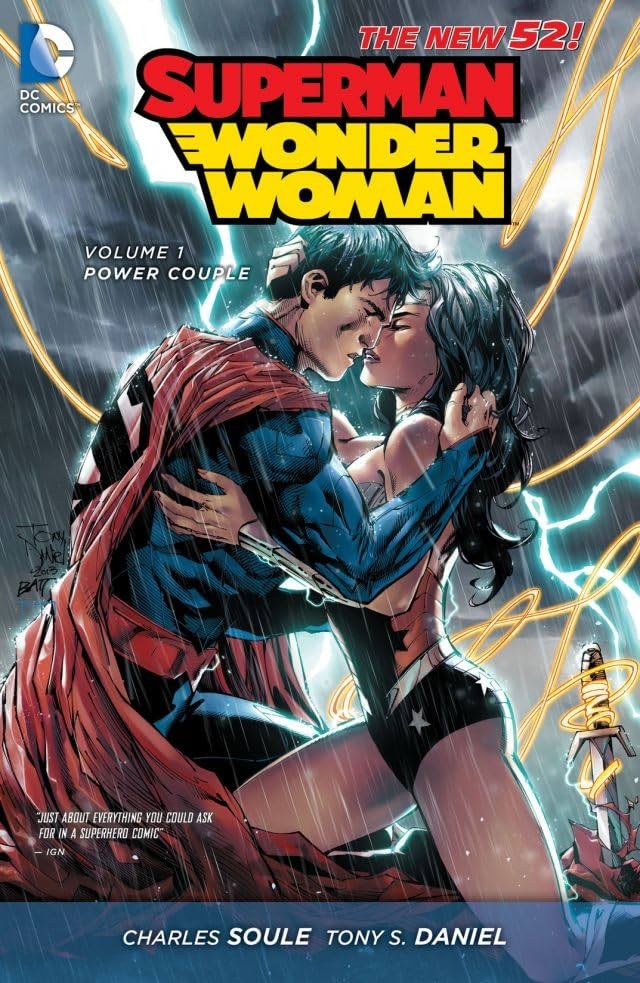 Yes, I know Superman and Lois Lane are still considered the most iconic superhero couple of all time.

Yes, I know there’s an extremely vocal contingent of Superman fans that believe there’s something missing whenever he’s not with Lois.

No, I do not care. That’s because the run on this series by Charles Soule and Tony Daniel really raised the bar for just how great a romance can be for these two iconic characters.

There’s a lot I can say about the romantic potential between Superman and Wonder Woman. It would probably take me multiple blog posts and several essays to adequately describe what sets it apart from Superman’s relationship with Lois and why it works so beautifully. Thanks to this series, though, I don’t need to do that.

This particular series takes place during the controversial, but endearing New 52 era of DC Comics. During this strange, but amazing period of DC Comics, Superman and Lois aren’t married. They know each other, but they aren’t romantically involved. That opens the door for Superman to explore a relationship with Wonder Woman. However, this series makes clear that this romance is no gimmick.

They’re not forced together, nor is it presented as a gimmick. From the very beginning, as well as the events that led up to it, there’s a distinct sense that Superman and Wonder Woman find one another during tenuous times in their lives. They’re two powerful characters making their way through a world in which they feel isolated. When they’re together, though, they’re at their best.

Again, if you’re a die-hard supporter of Superman and Lois, that’s fine. This series does nothing to undercut that. However, it does plenty to prove that Superman and Wonder Woman can share a powerful romance, literally and figuratively. Even after DC has undergone extensive retcons and reboots, this series still captures the power of that romance in the best possible way. 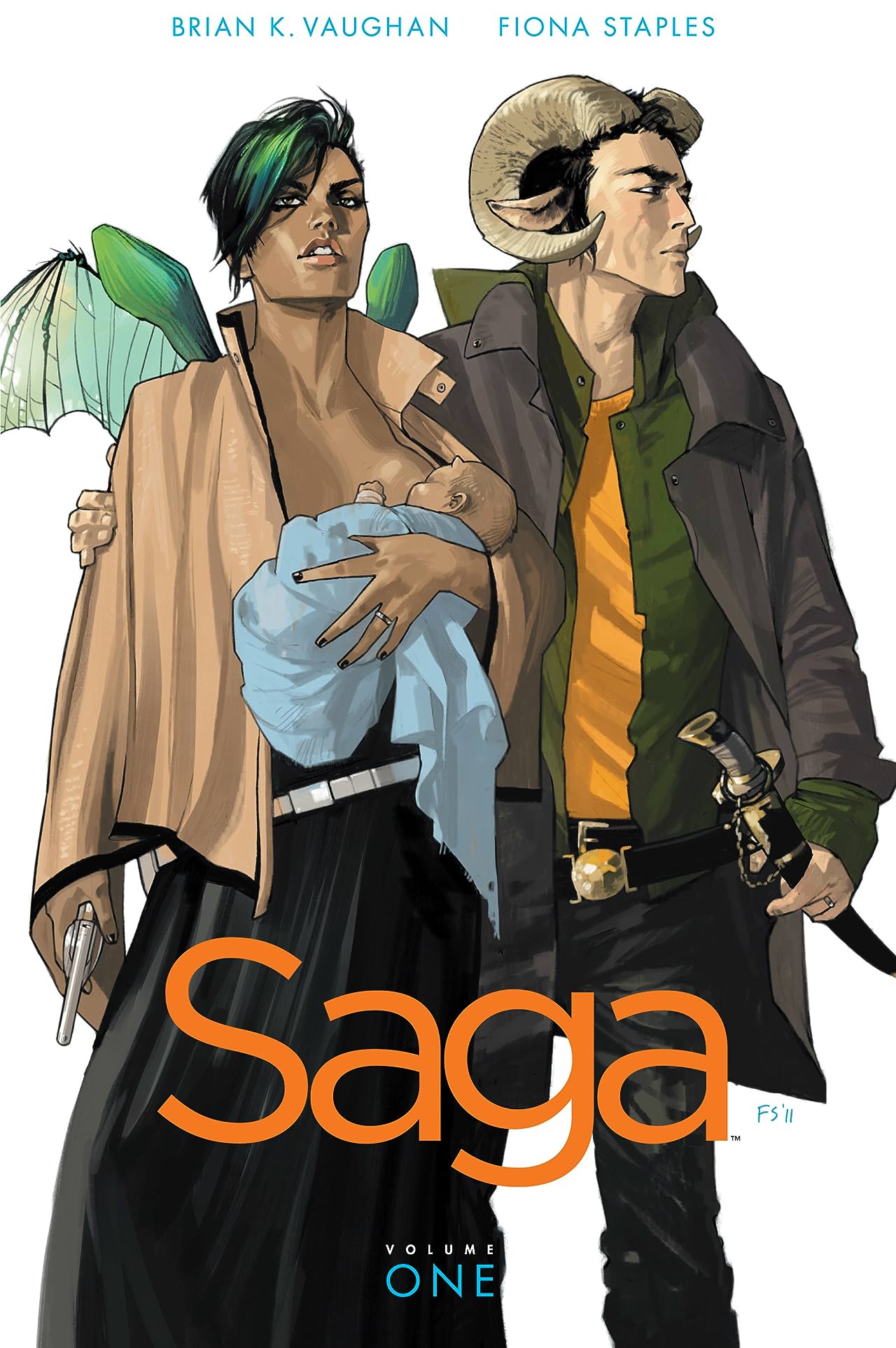 This is probably a controversial selection for those who aren’t familiar with this series. It doesn’t involve superheroes. It’s not a product of Marvel or DC Comics. It’s an entirely different world full of bizarre creatures that include talking cats, a humanoid seal, and an entire race of beings with TVs for heads. I swear I’m not making any of that up.

However, at the heart of this amazing series by Brian K. Vaughan and Fiona Staples is an amazing love story between two characters from warring worlds. That love is very much the driving force between all the conflict and the characters that get caught up in it. It’s one of those romances that has every conceivable force working against it, but it still happens and it’s downright beautiful

Alana and Marko aren’t Superman and Lois Lane. They’re not even Rogue and Gambit. They’re not exactly heroes trying to live up to an ideal. They’re soldiers in a war between two worlds, but they somehow find each other, fall in love, and create a family together.

It’s not a fairy tale romance, though. Their romance involves more than a few explicit sex scenes, as well as a scene where Alana gives birth to their daughter. Nothing is filtered or polished. The sexy and unsexy parts of their relationship is laid bare within a world that is full of fanciful characters and locales.

It’s a genuinely epic journey, but one that all comes back to the romance between Alana and Marko. No matter what kind of romantic you are, these two find a way to check the right boxes. There are many moments of passion, sorrow, and loss. There are also plenty of moments that are funny, cute, and endearing. It has everything a great romance needs and then some.

I should offer a fair warning, though. You will get attached to these characters. You will feel it during certain moments. As a self-professed romantic, I can safely say that it’s worth the risk.

There you have it! These are my top five selections for romance comics. I’m sure some will disagree with my selections. The list may even change as other great romance comics emerge in the coming years. That’s perfectly fine and I welcome any debates on my list.

Romance is in every medium and comics are no exception. I would even argue that the romance in comics is under-appreciated and under-valued. As the genre continues to evolve, I have a feeling that’ll change and I hope to be part of that change.