Big Superhero/Romance News: Batman And Catwoman Are Getting Married! 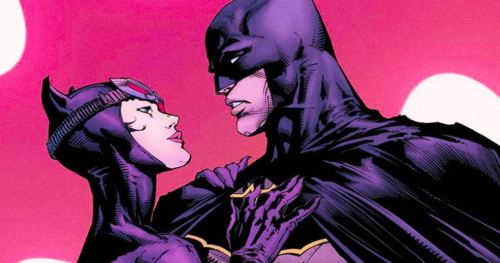 I had a whole other topic I wanted to discuss today, but sometimes certain events occur that require you to throw out your plans, spit on your schedule, and love every second of it. Despite some of the tragic news to come about in the last few days, something big just happened in the world of comics, a world with which I’ve made my passions known.

It’s news that appeals to both the comic book fan in me and the erotica/romance fan in me. It’s rare that a combination that potent converges in my world. When it does, my heart and loins are sent into overdrive for all the right reasons. I don’t care if that sounds overly dramatic. I’m in good a mood right now to dampen my spirits.

This time, I’m not going to provide a larger context. I’m not going to give some elaborate backstory on the circumstances to explain an ongoing controversy. Whether you don’t know squat about superhero comics or haven’t felt a romantic sentiment since the series finale of “90210,” you can’t deny this is big.

Batman and Catwoman are getting MARRIED! 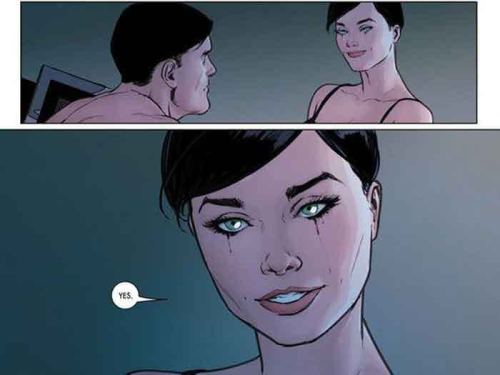 That’s right. USA Today broke the story. In Batman #24, Bruce proposed to Selena on a rooftop. Now, after months of agonizing build-up, Batman #32 gives the answer. The Dark Knight and the sexy jewel thief who dresses in a skin-tight costume are getting married.

In an era where 95 percent of all Batman stories involve him brooding all the time, including those involving Lego-themed characters, Batman is getting married. If you put your ear to a computer screen, you can hear thousands of comic fans squeeing and cheering uncontrollably.

In the context of superhero comics, this is big news and not just because it means seeing Catwoman in her underwear more often. As I write this, superhero comics are going through a rough patch in which iconic romances, especially those involving Marvel’s heroes, are being undone, undermined, or reserved for non-canon alternate universes. It’s a tough time to be a romance fan and a comic fan. Lately, DC Comics has been trying to change that. They’ve been expanding the long-time marriage between Superman and Lois Lane in recent years, building on a family element and even giving them a son to raise. Someone actually had the audacity to think that a loving relationship can have appeal outside of a toxic love triangle. What a concept, right?

While they may not be as iconic as Superman and Lois Lane, Batman and Catwoman have had their share of romantic and sexy moments. Theirs is not the sweet, cuddly relationship that Superman has with Lois Lane. Theirs is more complicated, but many times hotter and not just because Catwoman looks sexy as hell in her underwear. He’s the goddamn Batman. She’s the sexy-as-hell Catwoman. Superman and Lois may make sweet, passionate love. That’s fine for them. For Batman and Catwoman, they’ll settle for the hot, exciting, dangerous love that gets the heart and genitals going in all the right ways. It’s even sexier than it sounds.

For Batman, a character best known for brooding, growling, and making Christian Bale one of the biggest names in Hollywood, it’s a huge shift in his life. The past several years of Batman comics have expanded his mythos in many ways, even giving him a son, but he’s never really gone beyond brooding and beating up criminals. For a man defined by how tortured he is, this sort of thing adds some badly-needed balance.

Ever since the mid-80s when Frank Miller got his hands on Batman, he’s been such a dark character who is so overly serious in everything he does. At times, he seems to go out of his way to deny himself any measure of happiness. It makes Batman feel less like a hero and more like someone who’s just obsessive and/or mentally ill.

By having him find love with someone, that adds an important dynamic to his character. It means that he doesn’t just want to brood all the time over Gotham City’s crime problem. He wants to find some measure of happiness. Despite the loss his suffered as a kid, he still wants and feels love. Something about that shows just how resistant he is as Batman. Granted, Batman has had his share of love interests over the years, as is the case with most heroes. He’s still nowhere near as bad as Wolverine. However, of all those love interests, Catwoman is probably the most iconic. They’ve been married in other realities with varying degrees of success, but this is the first time DC Comics is giving them the same shot they gave Superman and Lois Lane.

Not much has been revealed beyond Catwoman’s acceptance of Batman’s proposal. I doubt anyone has thought about wedding plans or honeymoons just yet, which for them probably involves beating the snot out of the Joker. There may or may not be a wedding special like there has been with other iconic romances.

All we know is that the desire and the will is there. For Batman and Catwoman, or passionate lovers of any kind in any reality, real or fictional, sometimes that’s all you need.

6 responses to “Big Superhero/Romance News: Batman And Catwoman Are Getting Married!”