How “Mr. And Mrs. X” Provides Hope (And A Template) For Married Superheroes

If you were to go back 40 years and ask someone to tell a story about epic space battles, death stars, and wookies, chances are you’d get a lot off odd looks and insipid excuses. Some might even laugh in your face, saying such a story could never be told, let alone make over $7.7 billion at the box office. George Lucas is probably laughing at them on top of a bed made of money.

Great stories like “Star Wars” didn’t just prove there were millions to be made from elaborate space operas and quality sci-fi. It helped establish a template for others to follow in telling similar stories. Some have followed it better than others, but the most important thing “Star Wars” was demonstrate that it can be done.

The current state of married superheroes is in a similar situation to what the sci-fi genre was before “Star Wars” came along. Both Marvel and DC Comics have done a lot over the past couple decades to undermine married superheroes, some of which have left major scars for fans and characters alike. Just look up a story called One More Day for proof.

The excuses Marvel and DC have made aren’t very convincing, but they’re not entirely wrong either. Telling stories about married superheroes is challenging. There are only a handful of married superheroes that have stood the test of time. However, even the most iconic superhero couples have been prone to the complications of marriage.

That’s why a series like “Mr. and Mrs. X” is coming along at the best possible time. This series, which spins directly out of the denigrating heartbreak that unfolded in “X-men Gold #30,” may very well provide both the hope and the template for married superheroes moving forward.

The first thing I need to say about “Mr. and Mrs. X #1” is that it’s part of a larger story that began unfolding before the events of “X-men Gold #30.” Kelly Thompson, who wrote “Mr. and Mrs. X,” also wrote a mini-series called “Rogue and Gambit,” which I highly recommend. That story did something important for both fans of superhero romance and of superhero cartoons from 1990s.

In the world of iconic superhero couples, Rogue and Gambit occupy a gray area of sorts. They’re one of those couples that rarely tops any list of notable superhero romances, but they’ve always been closely linked to one another. This is due largely to the chemistry they showed in the “X-men Animated Series” cartoon that defined so many childhoods back in 1990s. I know because I was one of them.

While Rogue and Gambit have always had romantic potential, it was never fully utilized. Neither the cartoon nor the comics ever took it beyond a certain point and not just because Rogue’s life-draining powers hindered their capacity for intimacy. There was just no real effort to evolve their romance beyond flirting and card puns.

Ms. Thompson changed that with “Rogue and Gambit.” This under-developed romance grew more in the span of five issues than it had in over 15 years of comics, cartoons, and failed efforts to get a Gambit movie off the ground. With “Mr. and Mrs. X #1,” Ms. Thompson dares to skip several steps and let this couple take the plunge into superhero marriage. Considering how even a much more iconic couple in Batman and Catwoman failed to get that far, that’s quite an achievement. However, the way in which “Mr. and Mrs. X #1” portrays the sexy, romantic details of married superheroes is a far greater accomplishment. I would go so far as to say that it sets a new standard for just how appealing married superheroes can be.

One of the most important things “Mr. and Mrs. X #1” does is expand on the events of “X-men Gold #30.” This isn’t just critical for the sake of Rogue and Gambit’s relationship. It helps fix the greatest flaw in that issue. When the marriage of Kitty Pryde and Colossus fell through in a heartbreaking moment, Rogue and Gambit basically stepped in to keep the ending from being a complete tragedy.

The way their impromptu marriage presented in “X-men Gold #30” is both shallow and crude. It’s basically just forced in there, a marriage for the sake of saving a botched wedding. It never even gave the impression that Rogue and Gambit were serious about marrying one another. They just did it on a whim, their wedding having the depth of a drive-through chapel in Las Vegas.

“Mr. and Mrs. X #1” fundamentally changes that. It dedicates over half the issue to providing more details of that ceremony, making clear that Rogue and Gambit gave this more thought than the brand of cereal they ate that morning. There was preparation, planning, and even a surprise visit from Mystique, Rogue’s adopted mother.

This goes a long way towards showing that Rogue and Gambit are serious about getting married. Even if you didn’t read Ms. Thompson’s “Rogue and Gambit” series, the first eight pages do enough to show that there’s genuine love between these two. Moreover, they want take that love to the next level. 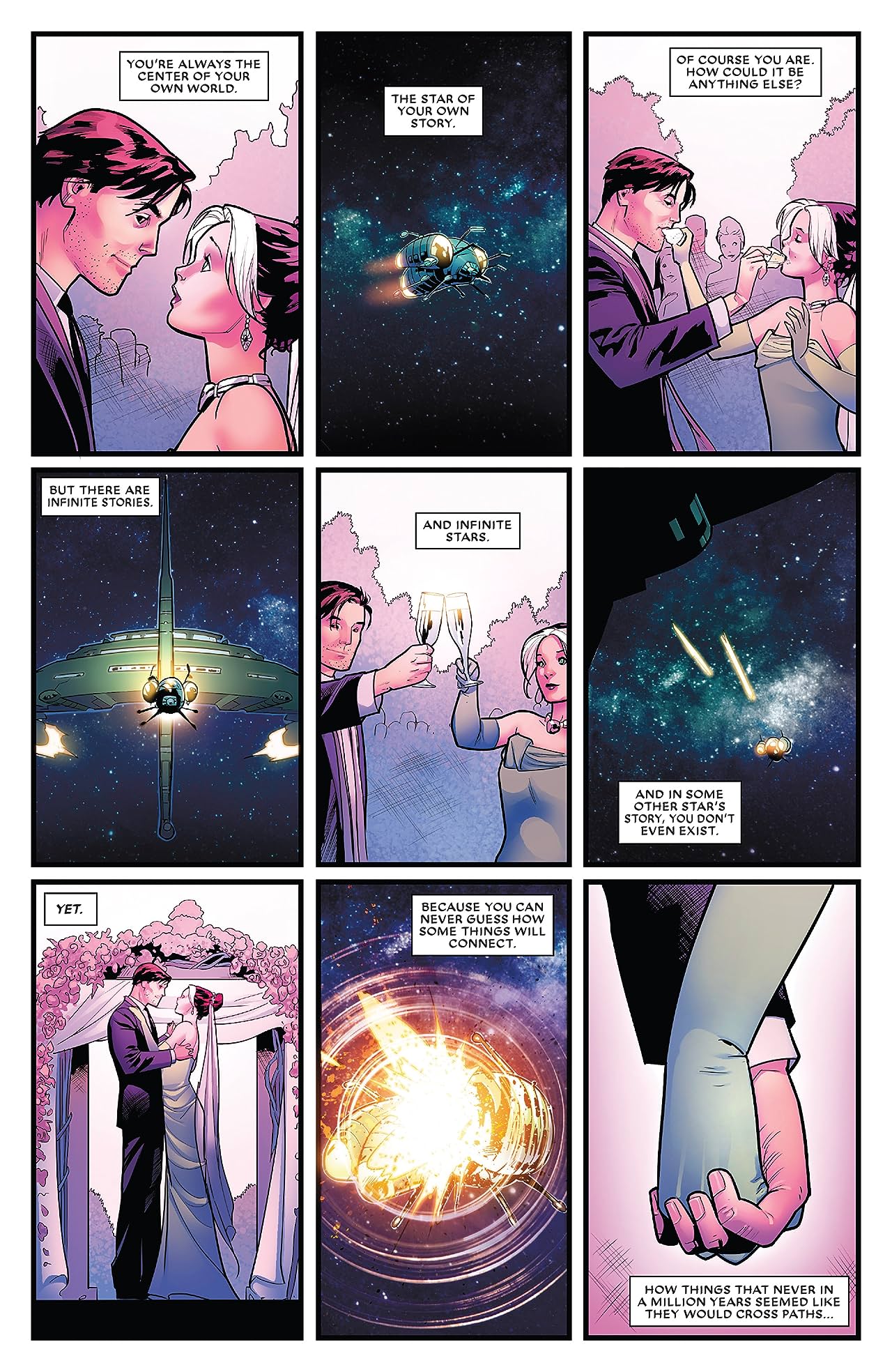 Even for a romance not built on Disney-style fairy tales, that’s a pretty important detail. There’s a major difference between characters actually wanting their relationship to evolve and just doing it because it makes for a nice event. It’s the same difference between wanting to eat to McDonald’s and having to eat at McDonald’s. It affects the experience.

That shared desire between Rogue and Gambit shows in both the ceremony and the honeymoon. That’s another key component that “Mr. and Mrs. X #1” adds to the template. It doesn’t just stop at the heartfelt wedding ceremony they share with friends and family. It acknowledges and even shows off the sexy tidbits of married life.

We get to see these two in expensive wedding attire and their birthday suit. There are moments of genuine affection. There are moments of playfulness. There are also moments where they address more serious issues, such as Rogue not being able to touch without the aid of a device that inhibits her powers. All of that is fit into a single issue.

On top of all that, “Mr. and Mrs. X #1” still finds time to squeeze in some heroics at the end. It’s not all heart-warming ceremonies and sexy honeymoons. Rogue and Gambit are still X-men. That means they still answer the call to adventure when it comes. That’s just what heroes do. Being married doesn’t have to change that.

That shouldn’t be such a novel concept, but that is a common criticism of married superheroes. Once they get married, their ability to be superheroes is somehow diminished. That’s like saying being a rock star diminishes someone’s ability to enjoy random songs on the radio. It’s a false flaw that Ms. Thompson and Mr. Bazaldua go out of their way to subvert.

The nature of the conflict that interrupts Rogue and Gambit’s sexy time is somewhat underdeveloped. It involves aliens and space battles, which is basically a typical Tuesday for the X-men. There’s not much in terms of refinement, but that’s less a flaw and more a logistical limitation.

“Mr. and Mrs. X #1” is the first issue of a series, which means there will be other opportunities to expand that story. Rogue and Gambit’s life as married superheroes isn’t ending. It’s just beginning. They’re still going to be heroes. They’re still going to fight aliens in between hot romps between the sheets. Married life doesn’t have to be boring. What a concept, right?

I’m not being coy. That’s the ultimate takeaway from this comic. Two well-known, well-developed characters can get married, share some loving moments, get sexy, and still be superheroes. Being married doesn’t have to supercede their heroics. It can complement it as well.

It’s a lesson that other superhero couples, be they iconic or based on a random hook-up, would be wise to learn. Even powerful heroes like Superman are only as compelling as the relationships and interpersonal dynamics that highlight who they are. In the same way teamwork makes the Avengers and the Justice League strong, marriage can make a superhero couple strong.

That really shouldn’t be such a radical notion, but Ms. Thompson and Mr. Bazaldua do plenty to remind us why it shouldn’t be. “Mr. and Mrs. X #1” sets a bold tone for Rogue and Gambit. It doesn’t stop at a beautiful wedding or a sexy honeymoon. The heroics continue. It just takes a different tone.

The ending of the issue, which I won’t spoil, even sets up some new drama between the happy newlyweds. It’s not the kind that’ll instigate another frustrating love triangle, but it does hint at a conflict that wouldn’t be much of a conflict if Rogue and Gambit weren’t married. Rather than limit their story, it expands it.

“Mr. and Mrs. X #1” does so much in the span of a single issue that it would take me all day to list them all. It’s not a perfect issue. If I had to score it, I would give it a 9 out of 10, just because it had piggy-back on the heartbreak in “X-men Gold #30.” The most important achievement, though, is the precedent it sets. Married superheroes can be sweet, sexy, and fun and this is how you do it.

Like a marriage in a real world, relationships evolve. Getting married is not an endpoint. It’s another step in the dramatic, yet sexy narrative that is romance. Superheroes are fully capable of taking that step without turning into a bad sitcom. “Mr. and Mrs. X #1” shows that this step is worth taking. Hopefully, other couples follow and build on this sexy new template.

7 responses to “How “Mr. And Mrs. X” Provides Hope (And A Template) For Married Superheroes”