A Relationship of Equals: An Unexpected Example From An X-men Comic

This past week, I’ve been writing my thoughts about strong female characters and evolving trends in our concept of romance. I think these are thoughts worth sharing because popular culture is always evolving. Our tastes in stories, characters, and romance changes from person to person, from generation to generation, and from culture to culture. I’ve already seen plenty of changes in my lifetime. I expect to see plenty more, especially as I work on my own love stories.

One of the points I made in my article about doomed romances involves the flaws in dynamics of such romances. When one person, be it male or female, is unequal in terms of sacrifice and input, then that’s typically an obstacle that’s difficult to overcome. When a relationship is between equals, then the romance between them makes both characters stronger. That’s the kind of romance I’m hoping to create with one of my future books. As such, it’s important to take note of promising examples. Low and behold, I found one yesterday.

As I’ve already stated before on this blog, I’m a huge comic book fans. Some of my early exposure to love stories came from famous comic book romances. Among those romances are Cyclops and Jean Grey, two of the most prominent members of the X-men. I always had a soft spot for them. Their love story is among one of the most epic (and convoluted) in the history of comics, stretching all the way back to 1963 and involving multiple deaths along the way (long story).

Like many romances that began in different eras, it didn’t always make both sides equal. However, I would argue that the relationship of Cyclops and Jean Grey was far more equal than those of classic superhero romances like Superman and Lois Lane or Spider-Man and Mary Jane. Unlike those romances, Cyclops and Jean Grey are both superheroes on the same team. They both have superpowers and a superhero identity. On paper, they should be equals. In practice, however, it often led to tiresome tropes. A lot of them centered around Jean Grey fainting and needing to be rescued a lot. Case and point, here’s a clip from the famous X-men animated cartoon in the 90s.

Make no mistake. That happened A LOT. Jean Grey seemed to faint way too often in this cartoon. Things got slightly better for her in the X-men movies, but until her role in this years X-men: Apocalypse, she was largely relegated to being a prize for Cyclops and Wolverine to fight over. It’s a major reason why this romance isn’t quite as celebrated as other major comic book romances and I say it’s a valid reason.

So imagine my surprise when I picked up my comics yesterday and came across X-men 92 #5. In this issue, we catch up with Cyclops and Jean Grey, who are now retired from the X-men and trying to build a life as two normal, healthy lovers. Despite terrible tastes in sweaters, their efforts yield mixed results as superheroes rarely stay retired. 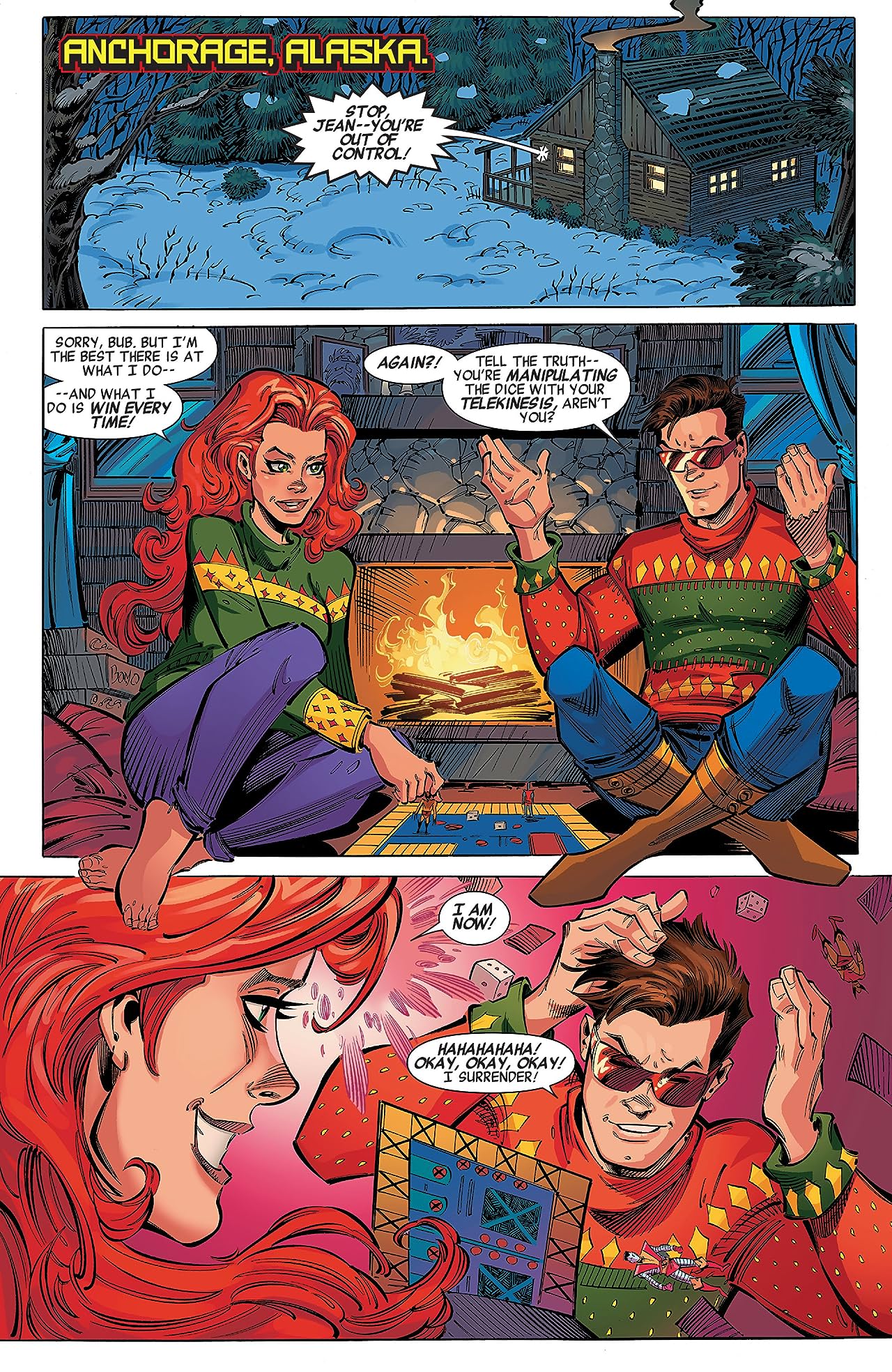 However, it’s not that Cyclops and Jean Grey end up having to don their superhero costumes again that strikes me about this issue. It’s how utterly refined their relationship dynamics are here. Remember that clip I linked to earlier with Jean Grey fainting? That doesn’t happen here. Not once. Anyone who watched all 76 episodes of the X-men cartoon in the 90s can probably appreciate how big a deal that is.

Instead, the comic does something special with these two, something that I actually don’t see very often in comics these days. It shows Cyclops and Jean Grey as two lovers, being superheroes on an equal playing field. At no point do they end up having to save one another. At no point do they undermine or frustrate one another. Every step of the way, they support and complement each other.

That’s not to say there aren’t some disagreements. Cyclops is initially mistrustful of some of the allies they come across, which is perfectly in line with his character, but Jean Grey vouches for them and he trusts in her. He trusts her as anyone should trust their lover and it pays off. He supports her. She supports him. It’s a beautiful thing that shows a relationship actually functioning. This is something that pop culture overlooks and for good reason. The narrative of how two people fall in love or how two people fall out of love is often more dramatic. However, it’s a story that gets told and retold too often and in too many different forms these days. Rarely do we get a story that shows two lovers actually functioning together on an equal playing field. That’s what makes X-men 92 #5 so astonishing. It uses the romance to complement the story rather than drive it.

This is an important insight and one that I definitely want to take note of for my own work. As I said before, I do have a few projects in mind that rely on relationships between equals. I want to use strong male and female characters who don’t have to rely too much on overplayed tropes because I want my work to stand out. I can’t do that if I tell the same kind of story that people have read a million times before in various forms. So comics like this are vital tools for writers like me.

For others seeking different kinds of love stories, I strongly recommend X-men 92 #5. It offers a different take on an under-appreciated, and often underrated, relationship between two iconic characters. I hope we see more stories like this in comics, as well as movies, books, and TV shows. I think the time is right for this kind of romance to take hold.

49 responses to “A Relationship of Equals: An Unexpected Example From An X-men Comic”