Lessons In Fate, Power, And Passion (From An X-men Comic) 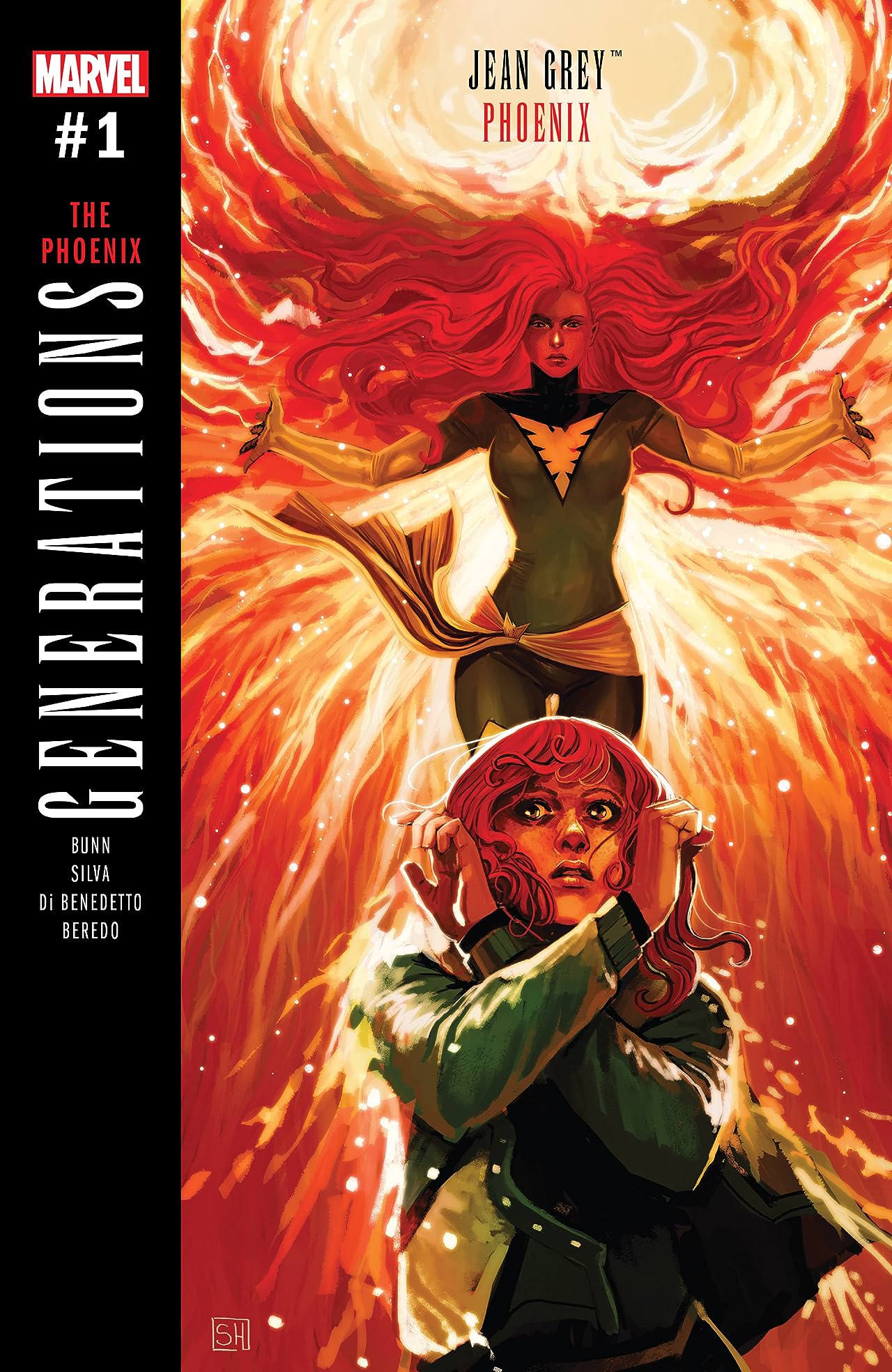 As kids, it seems as though everyone is trying to teach us morality lessons that’ll help us grow into functioning adults. Those lessons aren’t always effective, though. Just ask the potheads who sat through the DARE program in school.

As adults, we tend to pay less attention to those kinds of lessons because we arrogantly believe we’ve figured it out. We think we know enough about the human experience to determine what is right and what is wrong. People who think that way tend to be the arrogant assholes who refuse to admit that Dr. Oz is a quack and a fraud.

Truly functional people, be they kids, adults, or adults who still act like kids, never stop learning important life lessons. Life is a constantly changing, obstacle-filled struggle where you never see the finish line and are guaranteed to fall flat on your face at least once a week. That’s why lessons that really deliver a powerful message in a compelling way is a special, precious thing in this chaotic world we live in.

That brings me to comic books, superheroes, and the X-men. Yes, this is going to be another one of those posts. Yes, that means I’m about to extrapolate a major philosophical insight into the human condition from an X-men comic, most likely in a way that applies to love, sex, and everything in between. You’re welcome.

It’s not the first time I’ve gleaned such lessons from an X-men comic. A year ago, I singled out X-men 92 #5 as a testament to just how powerful a romance between equals can be. Chances are, I’ll single out more comics in the future and there’s a high possibility that they’ll involve the X-men, Deadpool, or Wonder Woman.

The goal is as simple. Marvel seeks to bridge the gap between its older incarnations of iconic characters with the newer versions. While some of those newer versions have already caused controversy, the goal is always the same. Marvel hopes to appeal to their long-time fans while appealing to newer fans who are just getting into the world of Marvel.

Comic companies do this fairly often, trying to please old fans while creating new ones. Having followed comics for a good chunk of my life, I’ve seen more than my share of efforts. DC Comics, Marvel’s chief rival, did it last year with their DC Rebirth initiative. By most accounts, it was a success. Now, Marvel is attempting to achieve similar success.

There are many challenges to that effort, but for Jean Grey of the X-men, those challenges are more daunting than most. I’m not talking about the kind of daunting that involves dragons, killer robots, and Brett Ratner movies. I’m talking about convoluted complications involving time travel, evil clones, and cosmic forces. Trust me, it’s way more complicated than it sounds. For this particular issue, though, you don’t need to know the fine print of those complications. You only need to know that Jean Grey’s story, after 50 years of X-men comics, got so crazy that one of her teammates, Beast, traveled back and time and brought her and the rest of the original five X-men to the future.

Now, since 2012, Jean Grey has basically been Marty McFly from “Back To The Future,” minus the incest sub-plot. She knows that her future sucks in that she ends up dead, and multiple times, no less. On top of that, she finds out she’s destined to become corrupted by a cosmic power known as the Phoenix Force, which will go onto cause all sorts of headaches, heartbreaks, and overall frustration.

That destiny is a huge part of the X-men mythos. That’s the part that “X-men: Dark Phoenix,” a movie I’ve talked about extensively, is going to try and capture. In this comic, Jean Grey has already read the spoilers to that story. She knows it doesn’t turn out well.

In fact, she has an ongoing solo series where the primary theme involves her preparing herself to face the Phoenix Force so that she doesn’t become that cute redheaded mutant who constantly dies and ends up on the wrong side of a bad love triangle. That’s entirely understandable and Marvel Generations: Phoenix & Jean Grey #1 gives her the best opportunity she’s had to date to change her fate.

This is where the lesson that Marty McFly learned the hard way comes in. Through elaborate space-time machinations that would give Doc Brown a migraine, Jean Grey is transported to a critical moment in the history of her character. It’s a moment that puts her in a position to change a lot more than just her fate.

That’s because she’s plopped in the middle of the iconic Phoenix Saga, also known by fans as the greatest X-men story ever told. It’s after her older self gains the cosmic power of the Phoenix force, but before it corrupts her in a way that destroys an entire star system and dooms her to a life of death and resurrection. There’s no part of that last sentence that’s exaggerated. 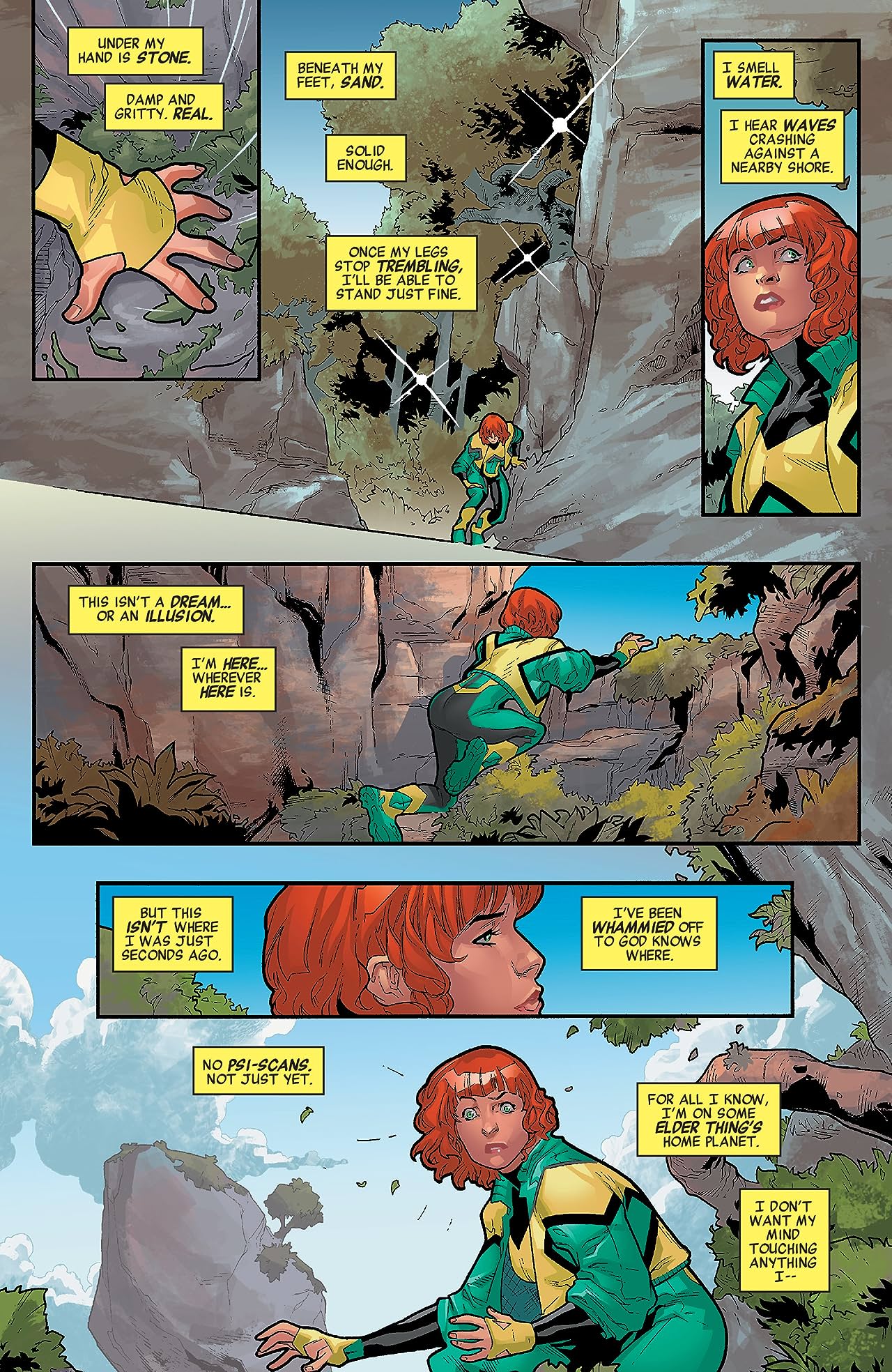 It’s an understandably confusing situation, but it’s one that puts Jean Grey in a position that even Marty McFly never dealt with. She doesn’t just have a chance to change her fate or learn more about her older self, who she’s only really known through the memories of other X-men. She has a chance to learn more about the cosmic power that she knows will doom her.

It makes for a series of colorful interactions between her and her older self that will bring tears of joy to the eyes of X-men fans of any generation. It’s hopeful, sincere, dramatic, and impactful. It fits perfectly within the narrative of Jean’s ongoing story in other X-men comics, as well as the story of her past self.

There’s so much to love about this comic, but I’m not going to spoil the entire thing here. I’d much rather have people go out and buy the issue. It’s money well-spent. Even if you don’t know much about comics or only know the X-men through the movies, this comic will appeal to you.

Beyond that appeal, though, I want to highlight an important theme within this comic. It’s a theme that applies to stories beyond comics and is relevant to life, in general. It especially applies to matters of love, passion, and intimate connections, which are major topic of this blog and the novels I write. 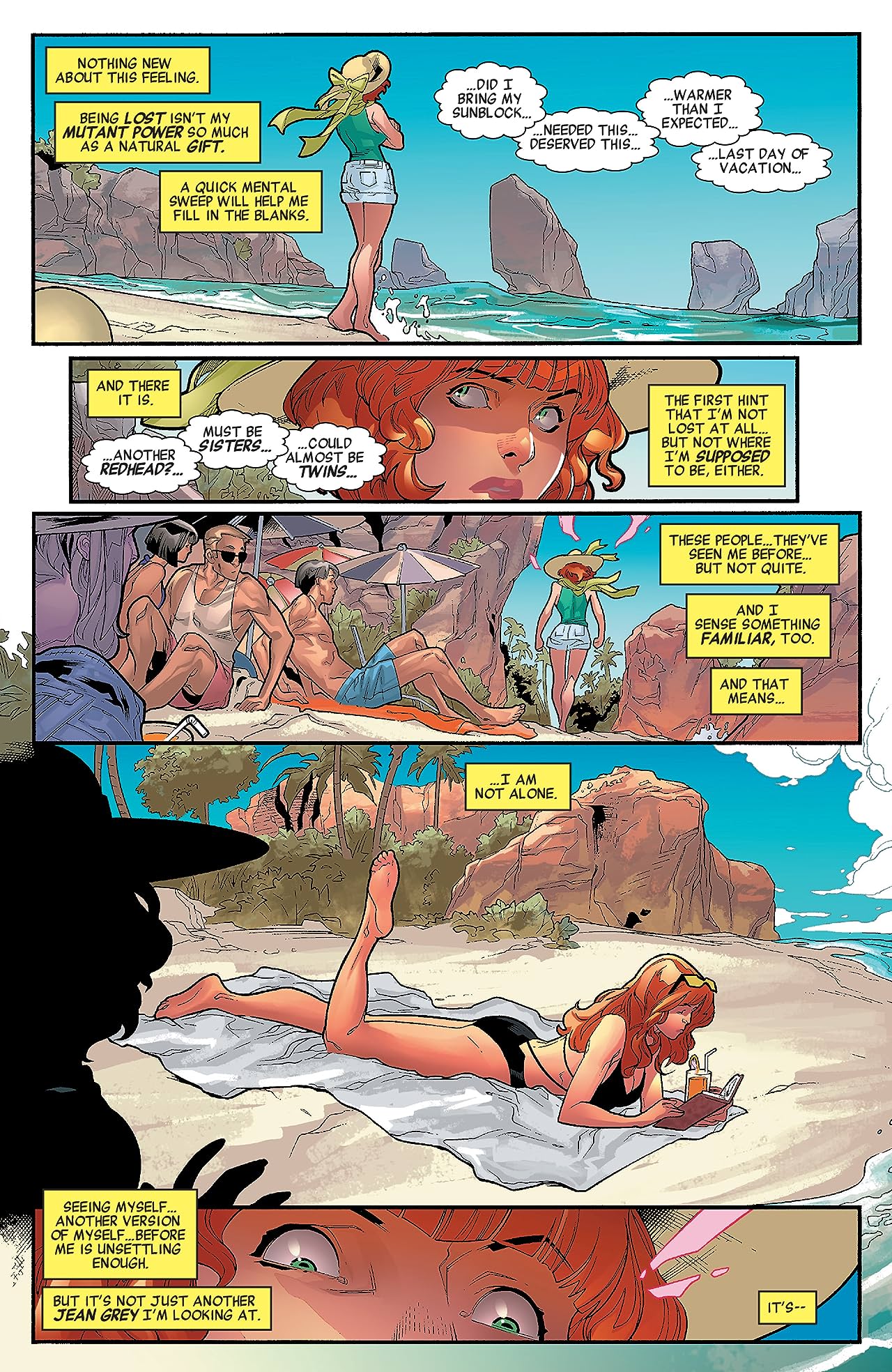 At the heart of Jean Grey’s struggle in Marvel Generations: Phoenix & Jean Grey #1 is a difficult decision that everybody who isn’t a psychotic dictator faces at some point in their lives. It has to do with having the power to effect a situation and choosing whether or not to exercise it.

In the comic, Jean Grey has a chance to tell her older self everything she knows about her fate. She could, in principle, warn her about how the events of the Phoenix Saga play out for her. As a result, she could ensure it turns out differently, preferably in a way that doesn’t leave her dead and subsequently cloned.

On the surface, it seems easy. We saw what Marty McFly chose. We saw what the entire cast of “Hot Tub Time Machine” chose. They chose the easiest, most obvious path. They understandably wanted to improve their situation. In doing so, they created a lot more problems that they had to solve. The stakes for Jean’s problems, though, are much higher. The problems she could create by changing her fate might be far worse than simply ending up dead. She’s not dealing with incestuous infatuations here. She’s dealing with a cosmic force that eats entire stars just for the fun of it.

She already knows the consequences of not changing anything. That has been hard enough to deal with. However, she has no idea whether she’ll fix anything by choosing otherwise. Given the Phoenix Force’s mixed track record, the odds are not in her favor.

I won’t spoil the choice she makes or what goes into. Again, I’d rather people read this comic to appreciate the full weight of its message. I’ll just say that the decision Jean makes is one that we all indirectly make when we have any kind of power over someone and can affect the course of their life.

Whether you’re a parent, a spouse, or an authority figure of any kind, you have an ability to make choices that affect other peoples’ fate. This is especially true when you’re in a relationship with someone. Your love for them and their love for you effectively links your fate. That makes your ability to make the right choices for the right reasons so critical.

It happens all too often, people using their position of power over others to abuse them. We see it when police harass minorities. We see it in crimes of passion. We see it in cases of spousal abuse and child abuse. When someone else trusts us with authority, we impact their lives in so many ways, often in ways we can’t see.

It can bring out the best and the worst in people, as the Phoenix Saga famously demonstrated. Real life demonstrates it too. Power does corrupt people. Sometimes the hardest choice to make is to not exercise that power to avert the potential consequences it might incur. It’s a choice that a lot of crazy dictators fail to make.

It’s a choice ordinary people fail to make as well. Parents find this out the hard way when they try to make decisions for their children. Sure, it seems like the right thing to do at the time. They may see it as them just protecting their child, as every parent should. However, they don’t realize until it’s too late how much damage that can do.

When you’re in an intimate relationship with someone, it can be just as powerful. If someone loves you implicitly and is willing to trust you so completely, you have the power to guide their lives in profound ways. That guidance, though, can be detrimental to the both of you.

When you have the power to influence a person or a situation, it’s easy and tempting to bend it to what you think will be more beneficial. The problem is that, without the benefit of hindsight, it’s impossible to know whether you’ll actually make things better or much worse.

The hardest decision in that situation is to acknowledge the problems as you understand them, bear the burden of solving them, and focus on the future rather than agonizing over the past. It’s rarely a preferable decision because it means accepting a situation and your role in it. It may feel like a missed opportunity, but it can just as easily be an averted crisis. Hindsight may be painfully clear, but possibilities are painfully vague.

Jean Grey, who is a teenager, mind you, in the story that plays out in Marvel Generations: Phoenix & Jean Grey #1, has to make this decision in the face of impossibly high stakes. What she does is a testament to the kind of character she is and the values we cherish in our heroes.

It’s a short, but powerful story that teaches an important lesson to children, adults, comic fans, and non-comic fans alike. Whether you’re a comic book character, a celebrity, an authority figure, or just someone with the slightest bit of leverage over someone, it’s a lesson worth learning.

4 responses to “Lessons In Fate, Power, And Passion (From An X-men Comic)”