Starfire: Profile of a Sex-Positive Superhero

I know that sounds like a non-sequiter, but hear me out. If you’ve been following this blog, you know that I am a big comic book fan. I tend to refer to comic books and superheroes when discussing issues on this blog, including the sexy kind. I’ve actually referenced the Deadpool movie as an example of progress in our culture’s attitudes towards sex. I promise it’s not as crazy as it sounds. I’ve also highlighted a recent issue of an X-men comic as an example of a balanced modern romance.

It’s not my fault that superheros help make my points so well and this issue is no exception. As I wrote about issues surrounding jealousy, rejection, and our cultural attitudes towards sex, I made some connections to a lesser-known superhero, but one who fits into this discussion in an important way. It’s not Superman. It’s not Batman. It’s not Wonder Woman. It’s not Captain America, Iron Man, or Wolverine. No, I’m talking about Starfire.

Who is Starfire, you may ask? Well, she’s an alien princess named Koriand’r. She can fly, has super strength, is super durable, and can shoot green energy bolts called starbolts. By all accounts, she’s very similar to Supergirl. She’s not as well-known as some of the other mainstream heroes. She still has quite a history and has done a lot to set herself apart from a crowded superheroes market. Oh, and she looks like this. 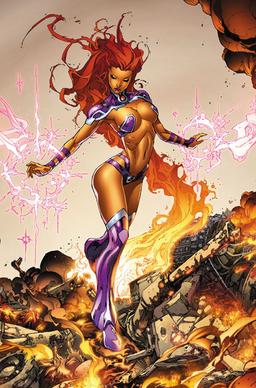 I think that tells a good chunk of her story right then and there. However, what makes Starfire special isn’t just her ability to look good in skin-tight outfits. A lot of female superheroes can make that same claim. Looking good in an obscenely revealing and/or extremely impractical costume is par for the course for female heroes and even male heroes to some extent. Anyone who remembers Michelle Pfeiffer’s memorable take on Catwoman in the old Batman movies knows this.

So what sets Starfire apart? Why am I singling her out from the countless other super-powered heroines who wear overly revealing costumes, have an awesome rack, and give pre-teen boys all sorts of strange new feelings? Well, it’s because Starfire embodies a special trait that sets her apart from every other superhero, male or female. She is, by far, the most sex-positive superhero in comics right now.

What sets Starfire apart is that she isn’t just comfortable with sex. She conveys it in an overtly positive way. She doesn’t treat it as an act of deviance. She doesn’t treat it as something callous or meaningless either. She treats sexuality as part of her overly loving, overly emphatic personality. She always frames it in a good, positive context. In the superhero world, that’s not just rare. That’s an aberration.

Traditionally, when a female character becomes more sexual, it makes them come off as more deviant. Overly sexual female characters take on a stereotypical vixen, one who flaunts her sexuality and exploits it to the utmost. I already mentioned Catwoman as one example, but Catwoman is a lightweight compared to Emma Frost of the X-men. I won’t get into all the way she’s conveyed her sexuality, but just assume she exploits it in ways even an erotica writer can’t imagine.

It’s an unfortunate theme that has played out in superhero stories in various ways over the years. Like slasher movies and teen movies, it reinforces this puritanical subtext that the more sexual a woman is, the more deviant she is.

Men aren’t immune from this subtext either. While they can get away with having more sex than female superheros, there’s still this unspoken impact attached to it. If a male hero is going to be more sexual, then he’s going to be more of an asshole. Like the jocks in 80s teen movies, they don’t come off as positive or upstanding like Superman or Captain America. The best example of this would be Namor, a character who has actually slept with Emma Frost. This is what he looks like and this is how he usually dresses. I think that effectively conveys the traditional dynamic of sexual superheroes. It’s also why Starfire is so unique in her persona. She dares to defy this tradition. She dares to be a compassionate, loving hero while being openly sexual. She does not carry herself like some superhero vixen, flaunting and flouting her sexual traits. In fact, flaunting sexuality is downright alien to her.

For Starfire, sexuality is just a simple, natural part of life. It’s just one of the ways she shows love and affection to those around her. She doesn’t do it with an agenda. She doesn’t do it to exploit. She does it for all the right reasons. She’s also very comfortable with her body. It doesn’t just show in her skin-tight superhero outfit either. She’s also very comfortable being naked. Having written extensively about the joys of nudity on this blog, it’s something I can definitely appreciate.

There’s one other trait to Starfire that sets her apart. It has to do with jealousy, the less joyous topic I’ve brought up on this blog. In being so sex-positive, Starfire doesn’t experience jealousy the same way we see in other characters. Throughout the history of superhero comics, there have been all sorts of crazy love triangles and convoluted love stories. Wolverine’s love life alone is a testament to this. With Starfire though, these sorts of convoluted emotional entanglements are a moot point.

The best example of this manifested in a solo series she starred in earlier this year. In that series, she deals with multiple male characters with which she shows a romantic interest. Dick Grayson, the first Robin, is just one of them.

However, it’s her reaction to another relationship with a character named Sol that really sets her apart. While she’s off fighting monsters and exploring subterranean civilizations (it’s a long story, but one that’s totally worth reading), he finds love with a co-worker. What’s Starfire’s reaction to this? Does she get angry, upset, or sad? No. She doesn’t. She’s happy for him.

Does that sound strange? Does it sound downright alien? Well, think about it for a moment. Someone Starfire really cares about finds happiness. Being a loving, empathetic person, she’s happy that he’s happy. Besides, if you love someone and they find a new source of happiness, shouldn’t you be happy as well?

It’s one of those strange thought experiments that makes too much sense for our culture. As I’ve said in other blog posts, our culture does a lot to create unhealthy attitudes towards sex and intimacy. The idea of being happy that a lover finds happiness with someone else feels alien because our culture creates this strange nation that we’re supposed to own the love and happiness of another.

Think about that for a moment. We’re supposed to own the intimate affections of someone else and should be upset when they find it with others. The idea of owning the thoughts and feelings of others doesn’t sit well with me. I imagine it doesn’t sit well with a lot of people on some levels. However, this is what our culture commands us to some extent.

It’s for this reason that Starfire is such a remarkable character. She embodies a different brand of sexuality. She embodies an attitude towards sex that sets her apart. Given that she’s an alien, these attitudes certainly feel alien. However, they’re attitudes that we can and should learn from.

46 responses to “Starfire: Profile of a Sex-Positive Superhero”