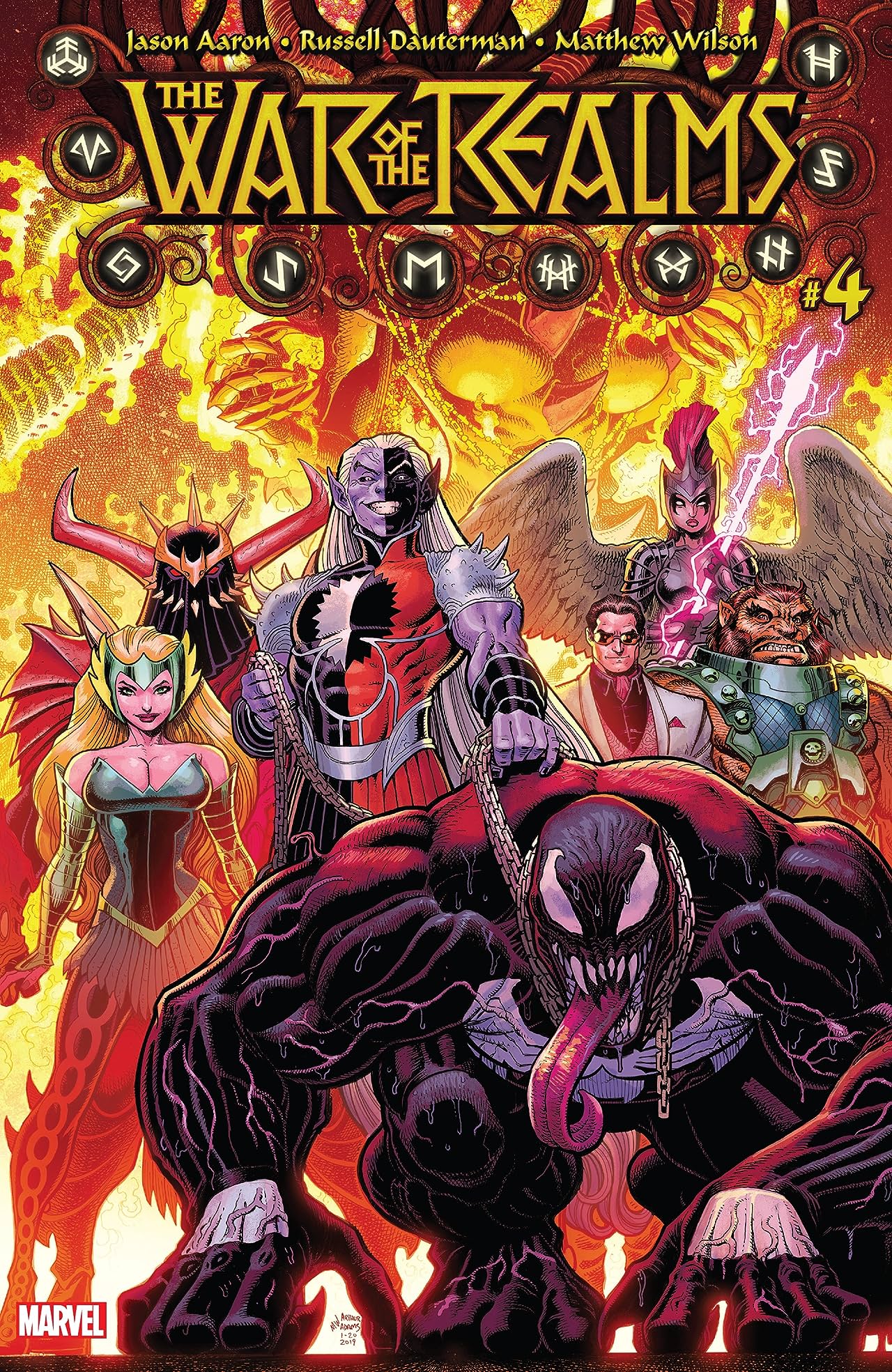 Once a week, the benevolent lords of the comic book world and the corporations they serve grace us with a new stack of comics. At a time when only the headlines of The Onion don’t make you cringe, this world needs the joy they offer. As such, I make it a point to single out one comic from that stack that offers the most value for the joy it conveys.

Some comics succeed by focusing on character development, as is often the case in most X-Men comics. Some succeed by subverting or stretching common superhero tropes, as we often see in comics like Kick-Ass, Invincible, or The Punisher. However, a book need not be overly creative to qualify as an awesome comic. It just needs to take everything we love and turn the volume up to 11.

That’s exactly what “War Of The Realms #4” does and then some. It’s one of those books where you need only real the title to know the scope and scale of the story within. This is not just superheroes in flashy costumes battling killer robots on the streets of a big city. This is a war that spans multiple realms involving gods, demigods, evil elves, and frost giants. If you can’t be entertained by that, then you’re just being difficult.

That said, “War Of The Realms #4” is not just several dozen pages of flashy action scenes. There have been plenty of those moments since this event began, but the action was mostly a means of conveying the sheer breadth of this war. Now, the writer of this Marvel main event, Jason Aaron, has raised the stakes even more by making it personal and turning the tide of the battle. 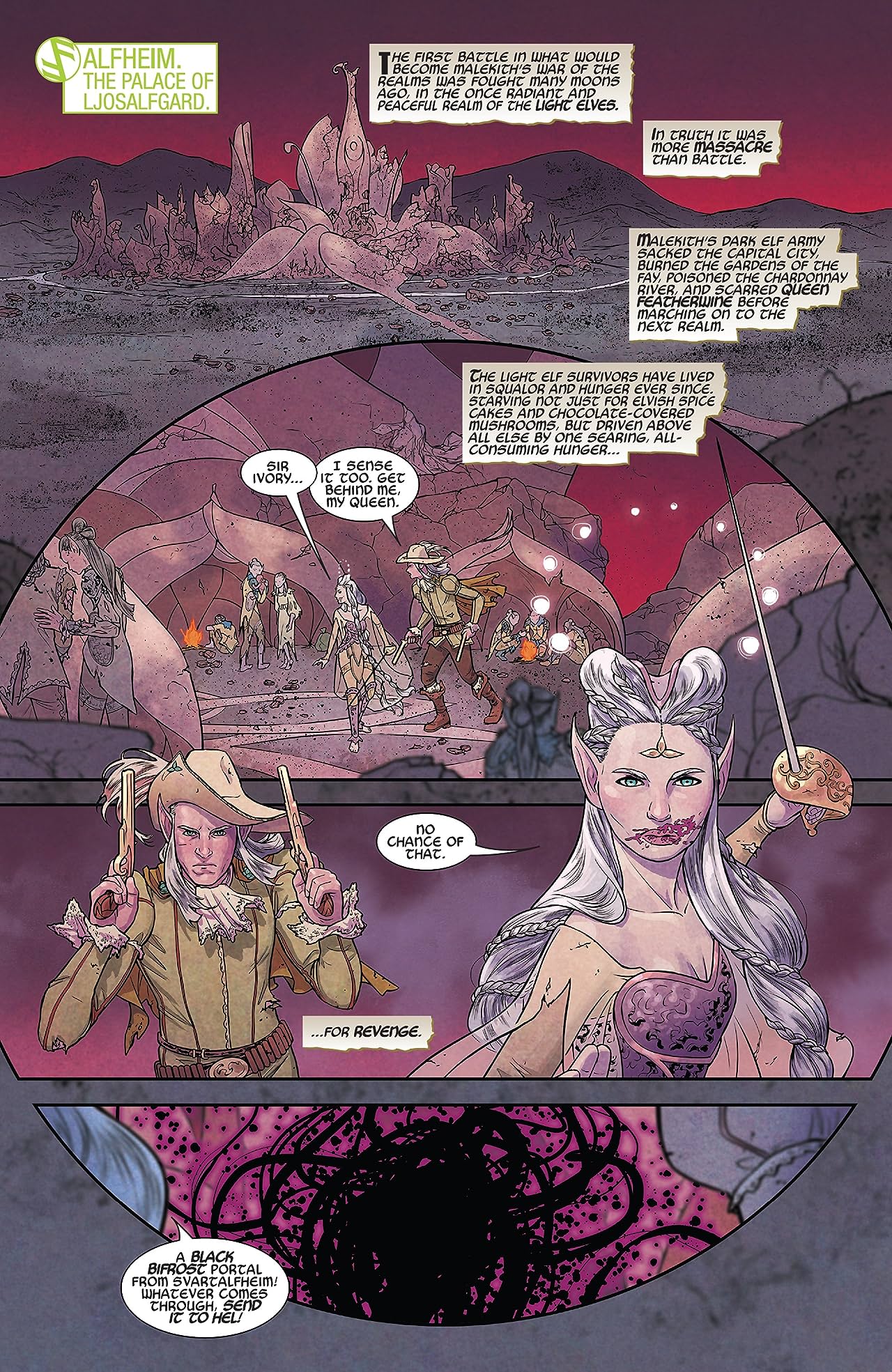 While you don’t have to know too much about the mythos surrounding Asgard and the 10 realms, it certainly helps in this case. Even if you’ve only seen “Thor: The Dark World,” you’ll have enough insight to know why this war is so massive. Malekith the Accursed might have been an afterthought in that movie, but make no mistake. He’s a devious, scheming, evil badass that requires a fully assembled team of Avengers to combat.

For the past three issues, Malekith and forces that include Frost Giants, Angels, Fire Demons, and Dark Elves have led a massive invasion of Earth. It’s not just in New York City, either. Malekith has bigger ambitions than simply disrupting traffic on Broadway. His forces hit every continent.

To this point, there has been no stopping him. Despite the Avengers fighting back on every front, teaming up with the likes of Spider-Man, Blade, Wolverine, Daredevil, Punisher, and Ghost Rider, it still isn’t enough. They still find themselves pushed back, beleaguered, and overwhelmed.

As a result, there have been casualties in this war. Some have already hit certain characters harder than others. Thor, the one usually tasked with beating the unholy shit out of Malekith before he can launch an invasion, is effectively subdued before he hammer back the threat. It is, by far, the most successful attack Malekith has ever launched against his Asgardian nemesis.

That means winning the war won’t come from Thor swinging his hammer around and hitting anything that looks like an evil elf. The Avengers and heroes from across the Marvel landscape have to join in the battle. They’ve managed to fight back, if only to keep the battle going. However, they haven’t made much progress in terms of ending it. 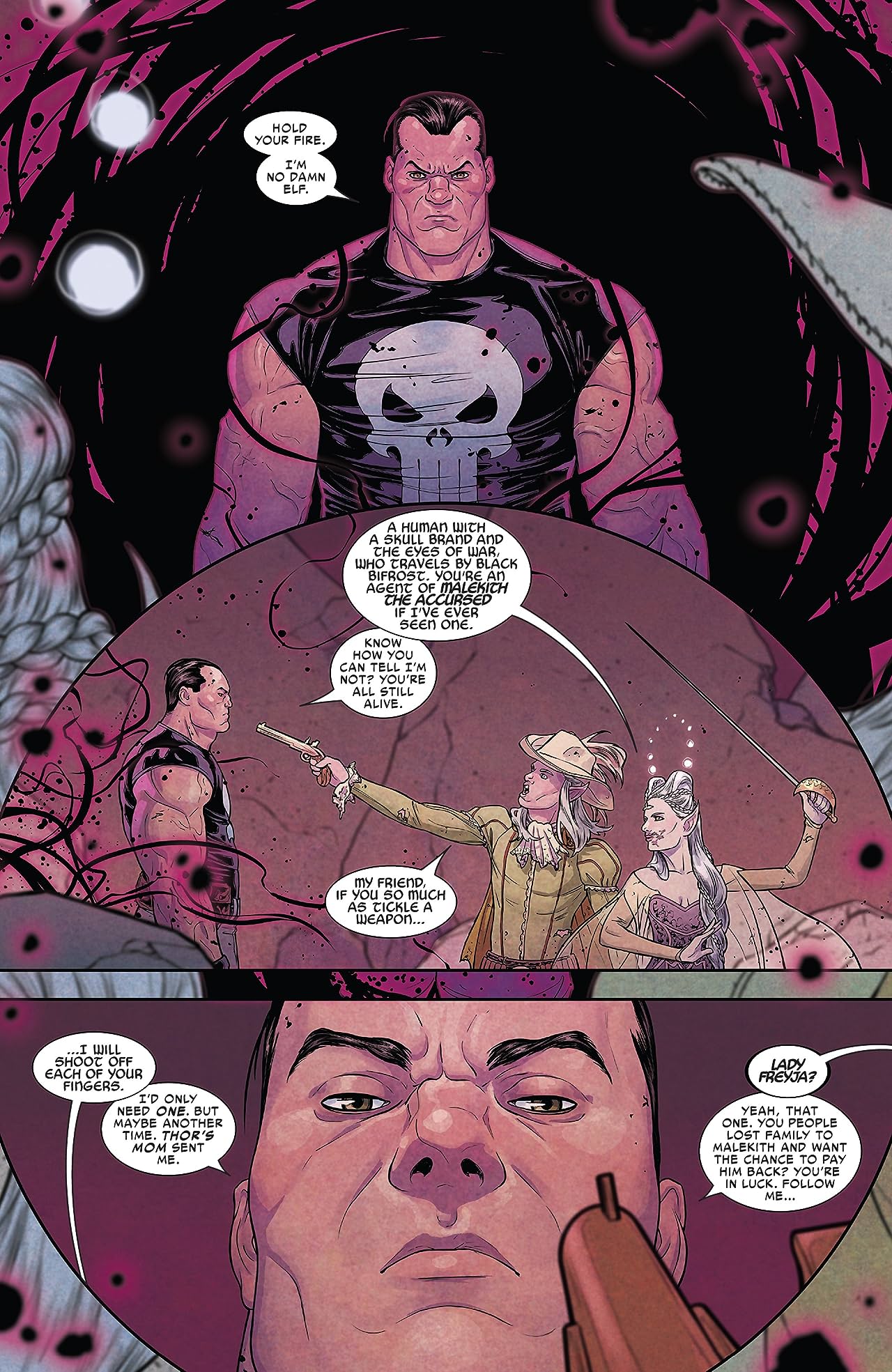 That changes in “War Of The Realms #4” and in some incredibly satisfying ways. Aaron, with the help of the divine artwork of Russel Dauterman, shifts the course of the battle by giving Odin and Freyja an overdue moment that has been years in the making. It’s a moment that marks an emotional high point for this event and for Thor’s overall story.

For the past several years, some of Thor’s biggest battles involve his parents. Odin and Freyja may have come off as only somewhat overbearing in the movies, but things are far more dysfunctional in the comics. There have been times when they’ve actively opposed one another. At one point, Odin even fought Jane Foster when she was wielding Thor’s hammer.

He is a divine blow-hard who most fluent language is arrogance. Freyja has managed to temper his tendencies in the past, but those moments have become few and far between. For a while, they were the godly equivalent of a married couple attempting a trial separation and making everything worse. They still see each other as husband and wife, but it seems like a formality at this point.

Finally, they share a moment in “War Of The Realms #4” that affirms why they got married in the first place. It’s a moment that will likely define the course of this realm-spanning war and have major implications for Thor, Asgard, the Avengers, and every other creature that has tasted an Uru hammer. 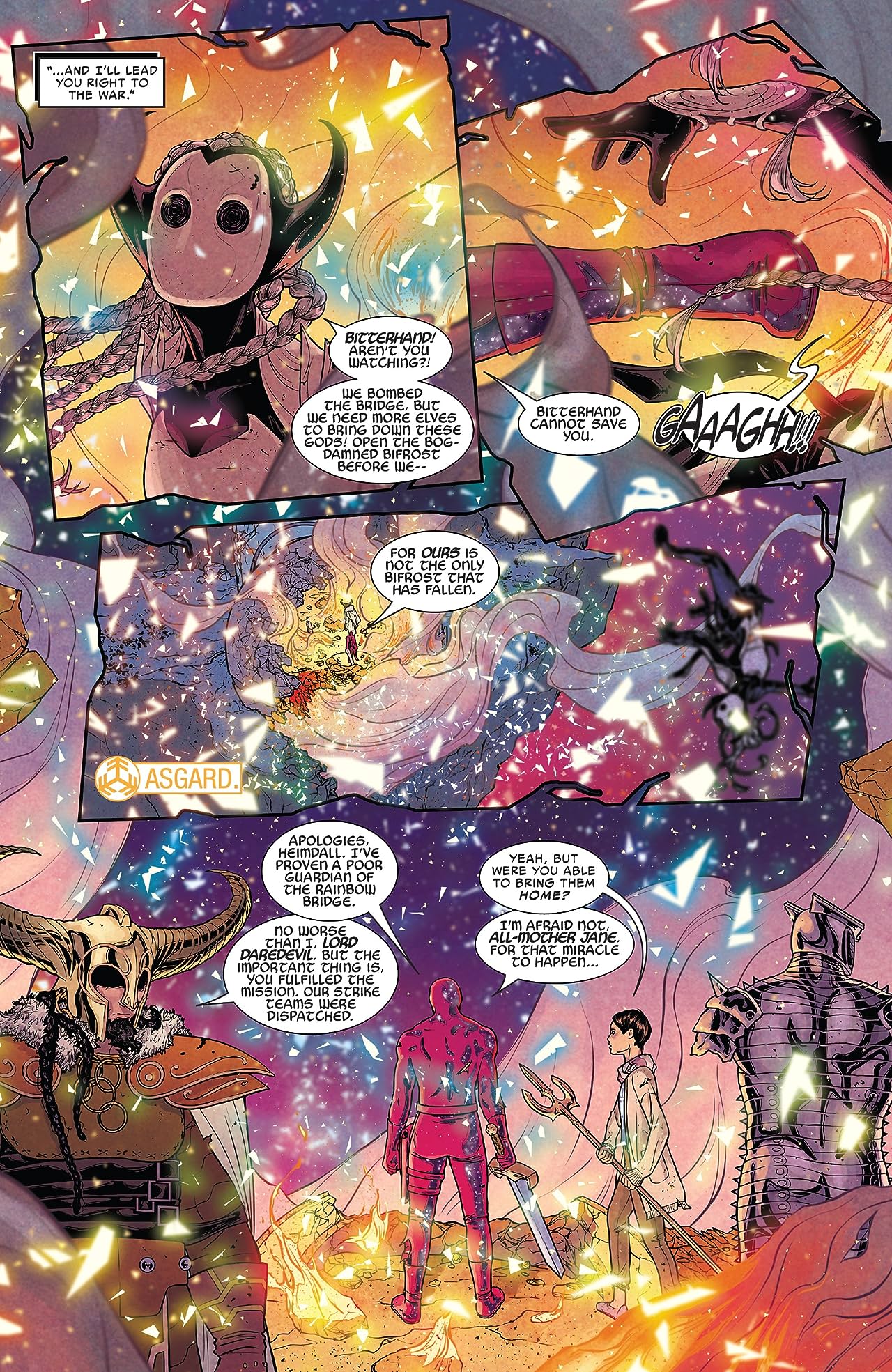 I won’t spoil the details of that moment. I’ll just say that it’s a culmination that has been in the works since before the war began. Every big battle, whether it’s in a comic book, a movie, or a TV show with a massive budget, needs a moment like that to give the conflict some emotional weight. That weight has been somewhat lacking since this event began, but “War Of The Realms #4” delivers in a way that feels satisfying and thrilling.

There are other moments in between. Aaron never lets the plot become too chaotic and Dauterman makes sure there’s always a spectacle to admire. Many characters manage to shine through the fog of war, including Ghost Rider, the Punisher, and Jane Foster.

It’s still a big, flashy war featuring superheroes, gods, and monsters from every corner of the Marvel universe. It has all the flashy style to make this realm-spanning war feel like a major event, but “War Of The Realms #4” gives it the necessary substance to give it weight.

It has spectacle, drama, action, and adventure. It also has gods, demigods, superheroes, and evil armies that can overrun continents. What more could you want from a comic book? 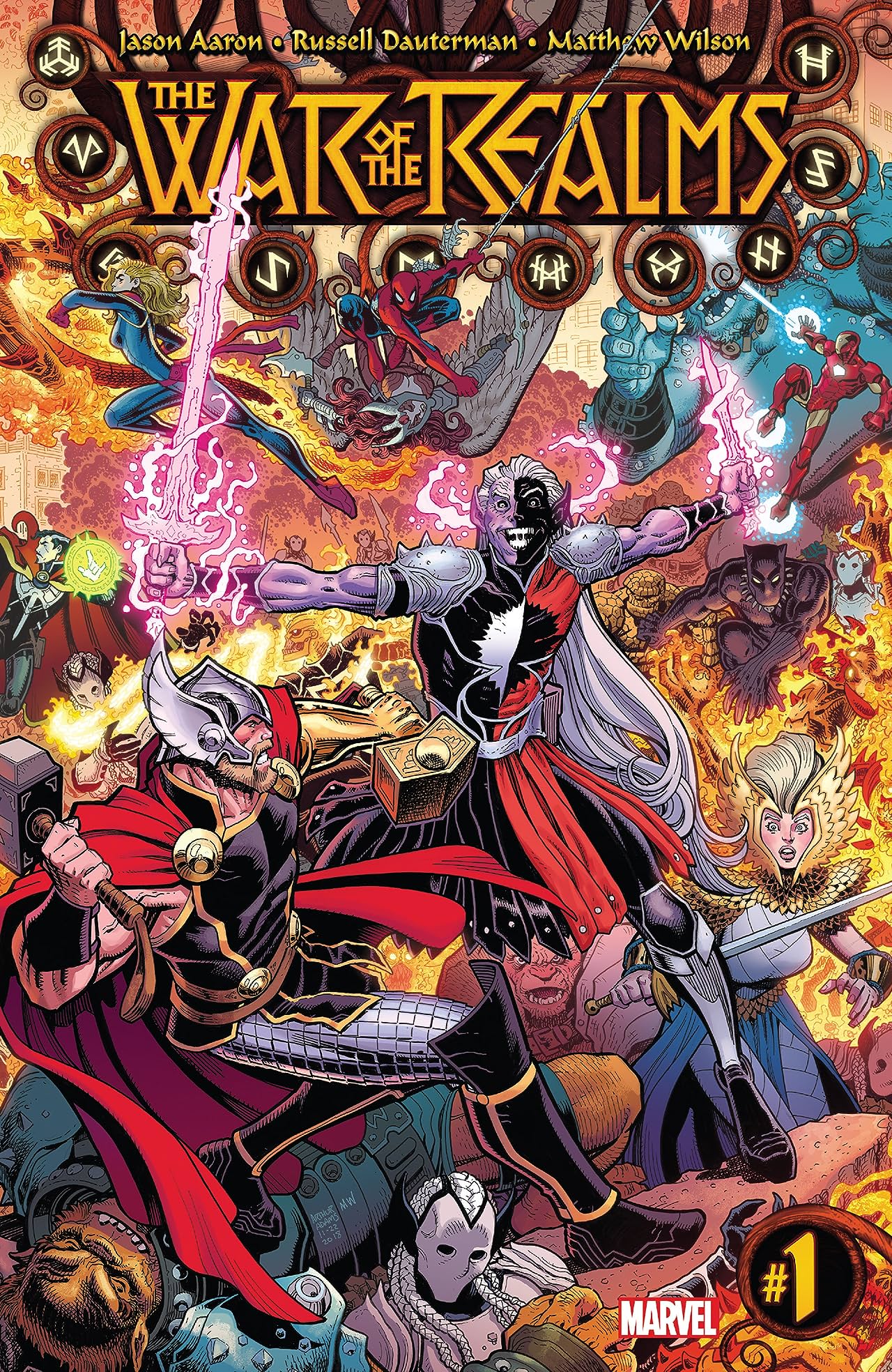 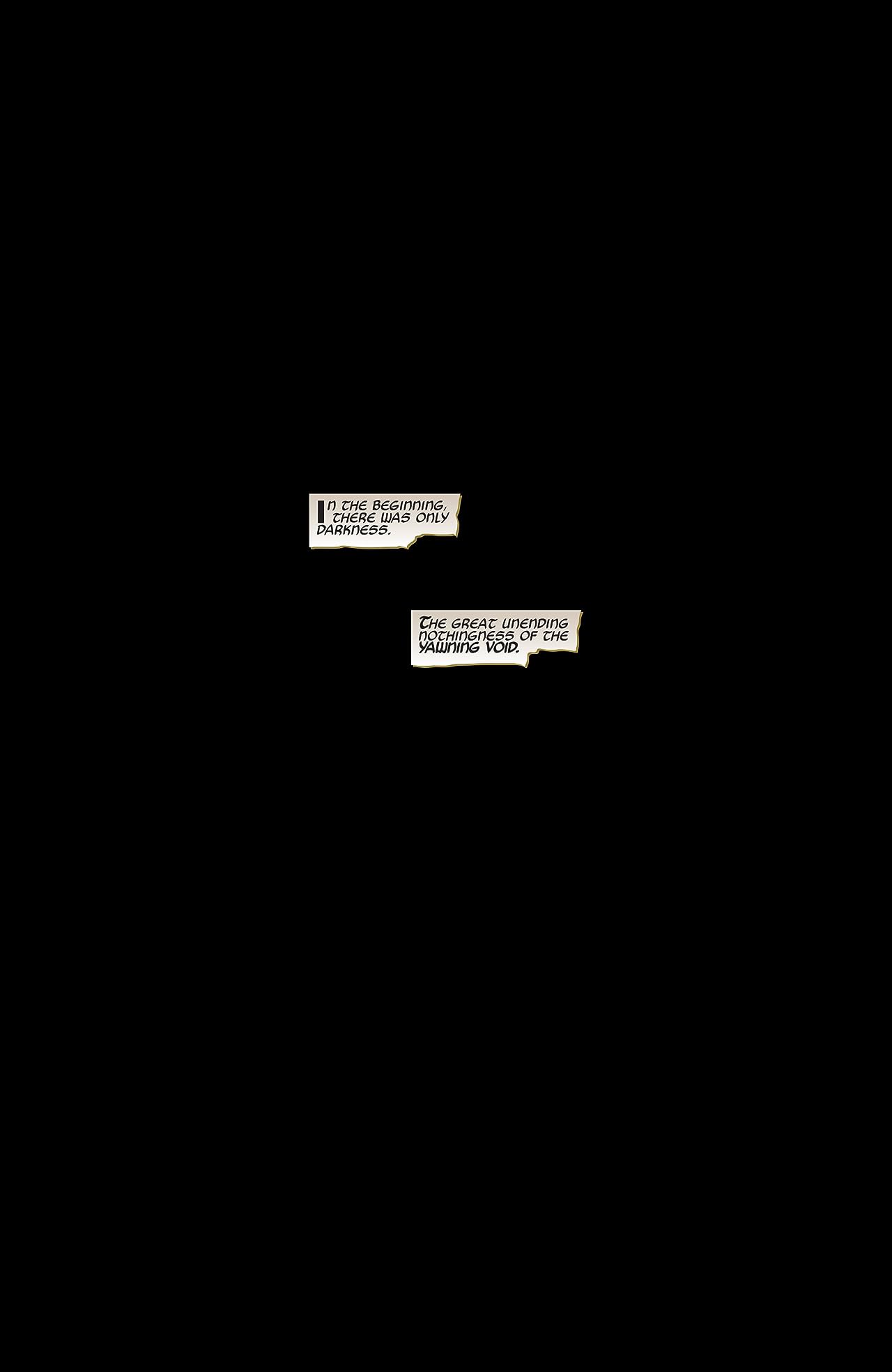 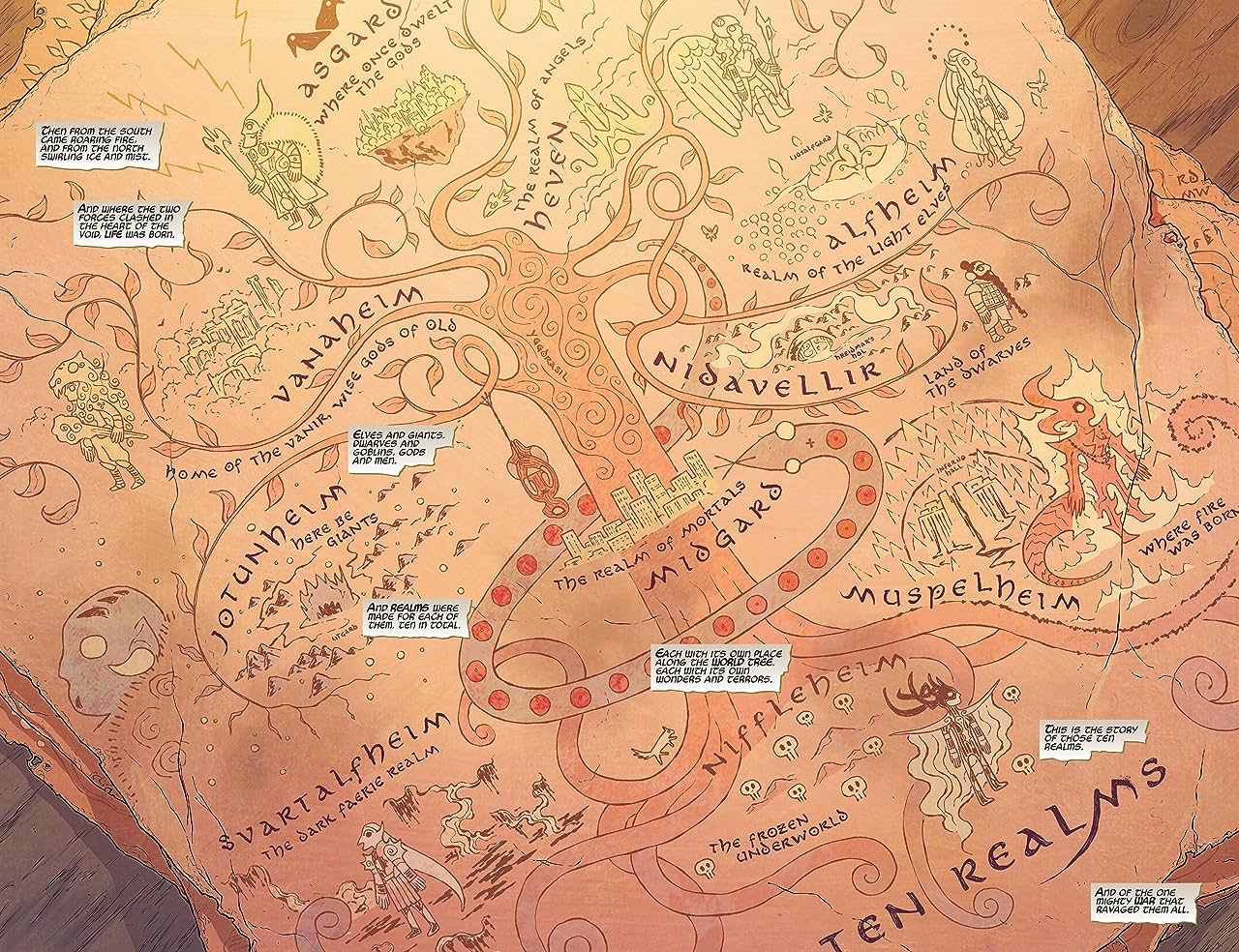 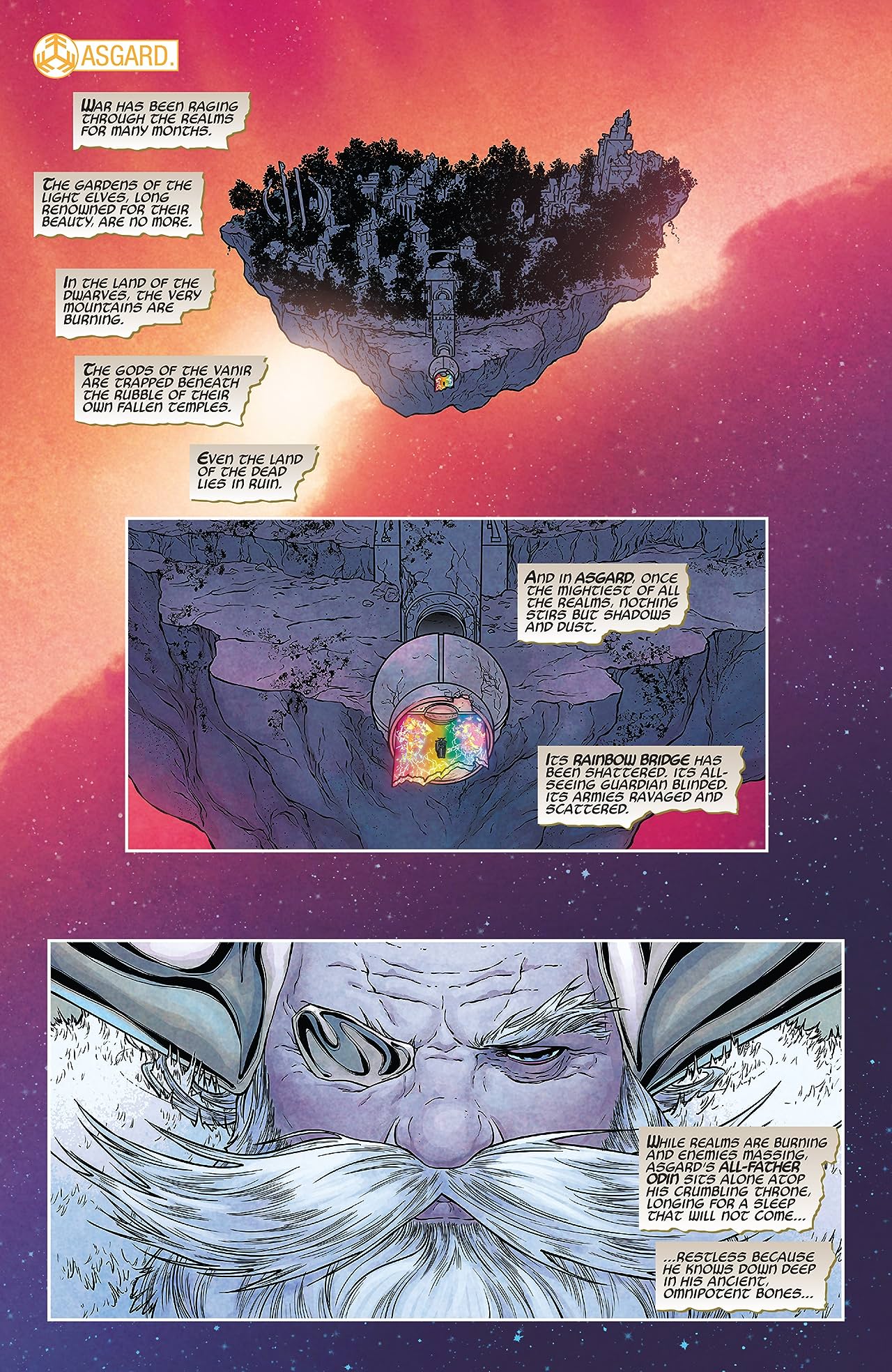 No words. For once, I have no words.