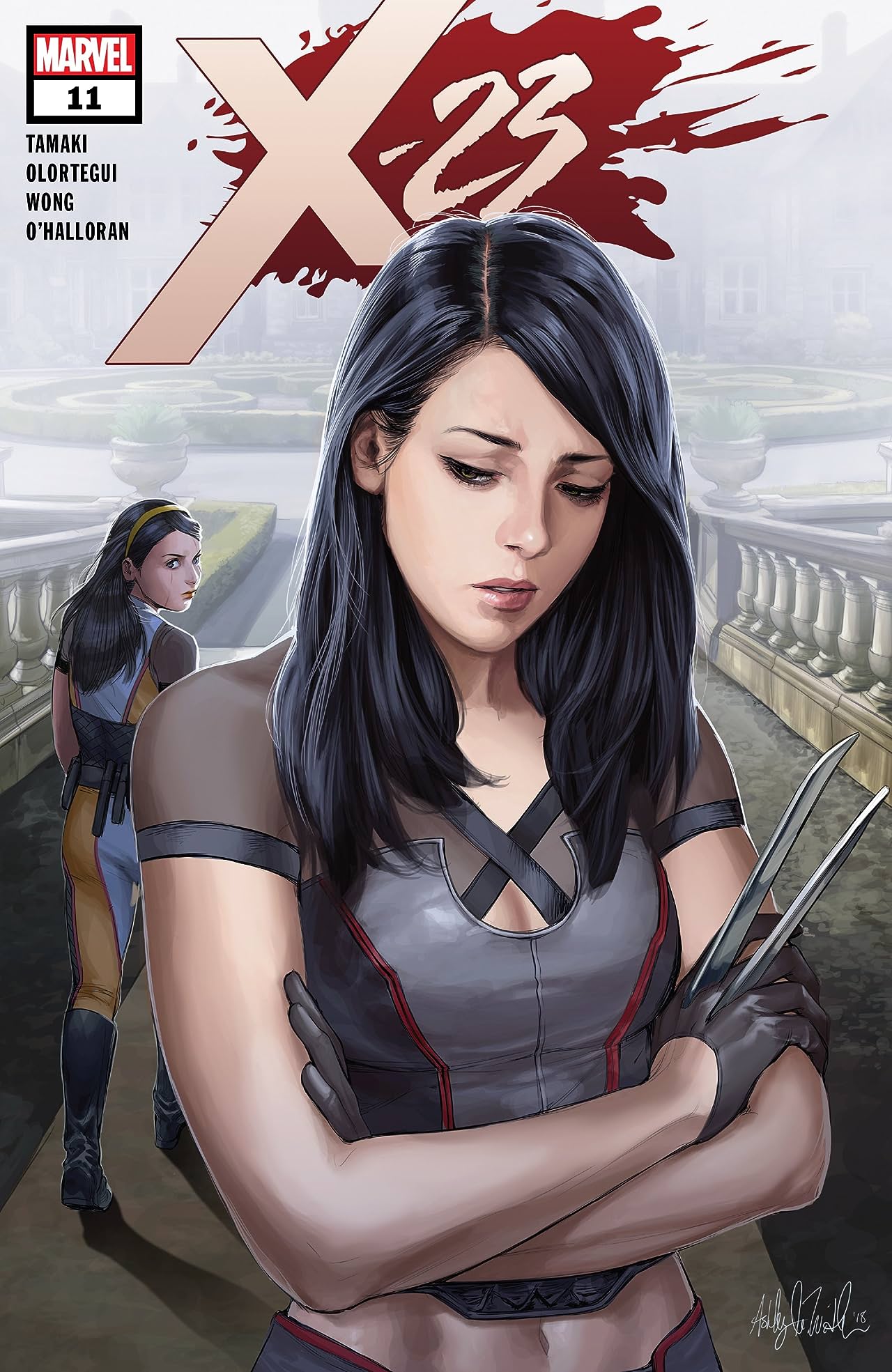 Every week, a new crop of comics enters this world to make the world a better place and/or help tide fans over until the release of “Avengers Endgame.” Whether you’re a fan of superheroes, melodrama, or just pretty artwork from artists not afraid to draw gaudy costumes, there’s something for everyone.

Every Wednesday, I take it upon myself to select one comic that I feel offers something extra beyond the price tag. Historically, few characters offer a wider range of appeals than Laura “X-23” Kinney.

Some know her as the daughter of Wolverine. Some know her as the breakout star of the “Logan” movie who helped make Dafne Keen a star. Regardless of how you know her or the medium in which she comes, she often brings a diverse story of violence, brutality, melodrama, and heartbreak. This week’s pick, “X-23 #11,” delivers on all of this, and then some.

Since writer Mariko Tamaki took over the series, Laura has gotten back to basics in terms of her mission. While she served admirably as Wolverine for a while, her priorities often change when she finds out some mad scientist wannabe is trying to make living weapons again. Considering how often this results in a blood bath, such efforts should count as an elaborate suicide attempt. 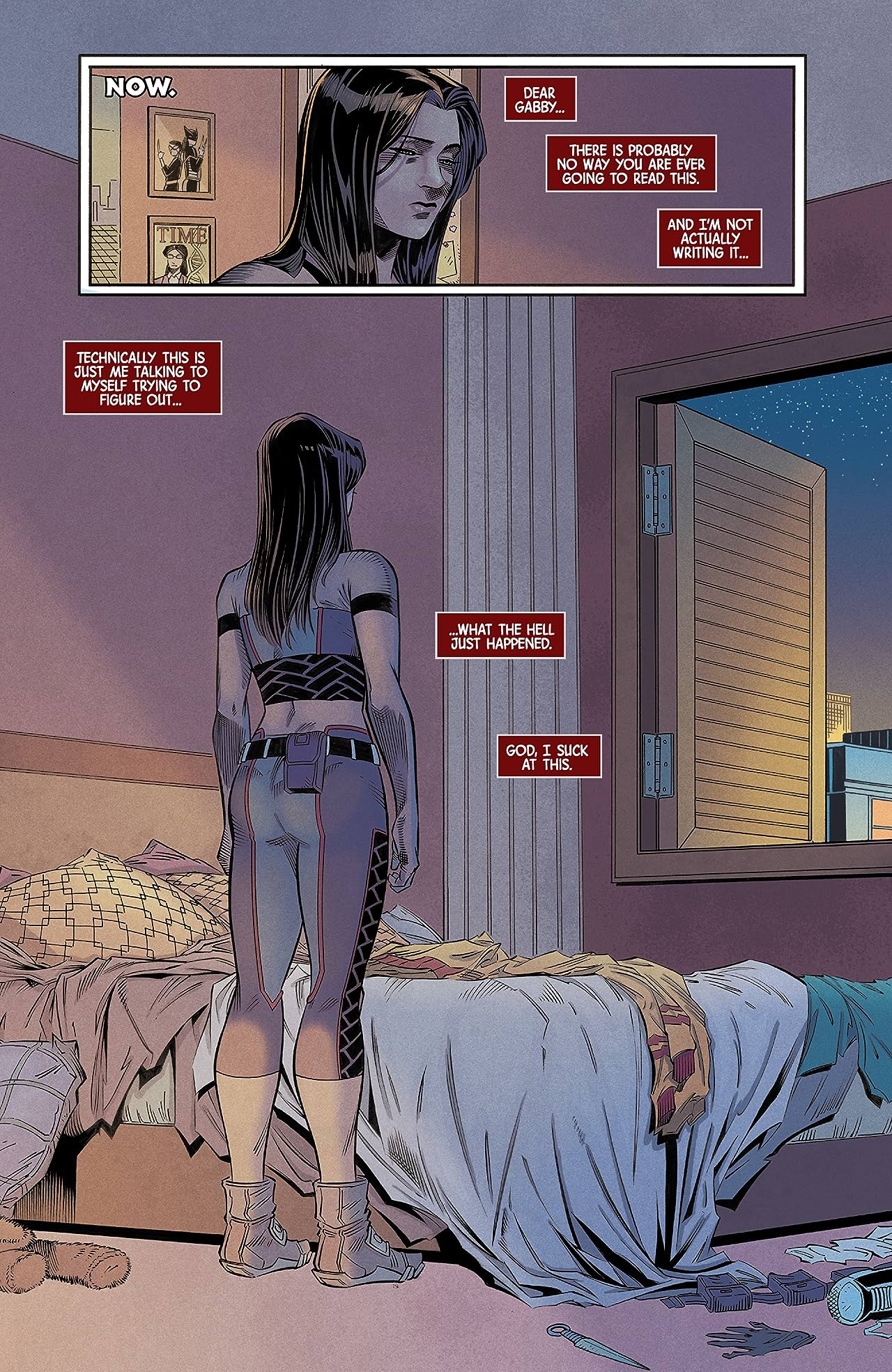 It’s a bigger deal to Laura than most. Like Logan, these programs have brought her nothing but pain. Unlike Logan, though, she doesn’t have the benefit of having holes in her memory. She remembers all the horrible crap that these programs did to her, which included the murder of her mother. She has more incentive than most to take these programs down as quickly and brutally as her father would have.

This is the primary goal in “X-23 #11,” but there’s a lot more at work than just someone with adamantium claws tearing through a weapons facility. In X-men comics, that’s basically a typical Monday. What makes this typical part of Laura’s mission harder than usual is the growing divide between her and her clone sister, Gabby “Honey Badger” Kinney.

That divide began several issues earlier. Like a pissed off Wolverine chasing the last can of beer, things have been getting anxious between the two. Since her debut in All-New Wolverine, Gabby has been a wonderful ray of sunshine mixed with omega-level cuteness for Laura. I’ve documented the breadth of that cuteness before, but it has never worked against Laura until now.

Laura knows it’s happening. She even senses that there’s some simmering resentment in Gabby, so much so that it affects her tastes in music. This isn’t just sisters bickering over what to binge-watch on a Friday night, though. “X-23 #11” establishes a fundemental divide between Laura and Gabby that may very well send the two sisters in a very different direction. 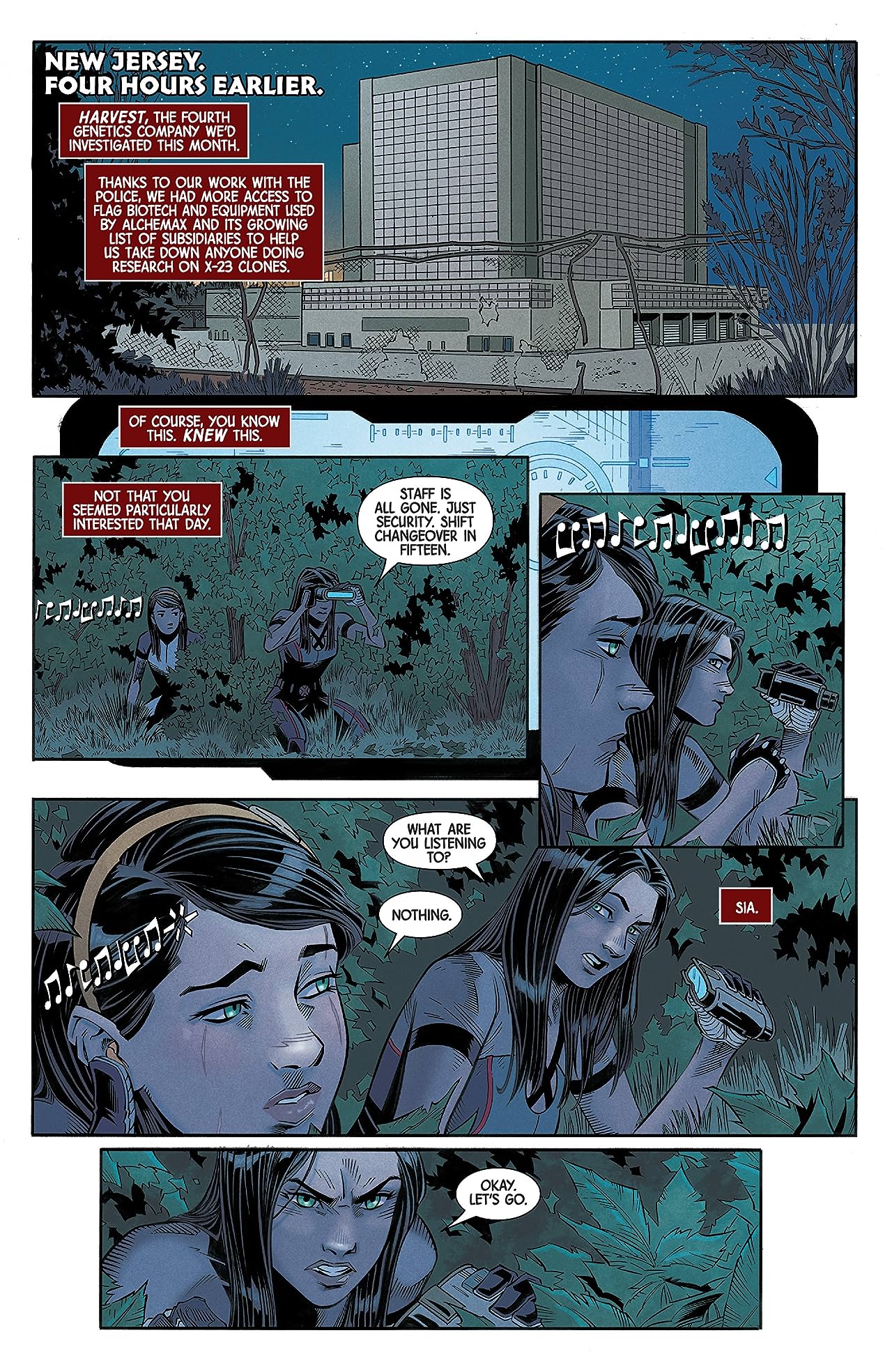 Tamaki has been setting up that divergence for several issues, but now there’s no putting it off any longer. It started with a debate over what to do when a shady company called Harvest made an army of X-23 clones that had been augmented/hijacked by cybernetics. While it made for some pretty brutal battles, it also highlighted the difference in Laura’s approach to dealing with other living weapons compared to Gabby’s.

Gabby, being the glowing ball of lovable cuteness that she is, wants to save these weapons. She sees them like other sisters. Even when it they come off as brain dead, like the cyborg X-23 army they battled, her first instinct is to save them and not destroy them. Laura, having seen too many clones cause too much suffering, favors a more direct solution that involves adamantium claws.

What makes the drama in those issues, as well as “X-23 #11,” so compelling is that it’s easy to see both points of view. Gabby knows that she wouldn’t even be alive if Laura hadn’t shown compassion when dealing with the clones that these living weapons programs produce. She also wasn’t subject to the same tragedies as Laura so she still has that wide-eyed optimism about helping other clones.

Laura, being older and a lot more damaged from her experiences, knows that the real world tends to crush optimism the same way Logan crushes beer cans. She has suffered and lost a great deal in dealing with these living weapon programs. She understands that not every clone can be saved. She knew that was the case with the cyborg clones that she and Gabby battled, but also knew Gabby was not going to agree with her.

Now, as the aftermath of that conflict sets in through “X-23 #11,” they both face some difficult, heart-breaking choices. For once, few of those choices can be made while stabbing heavily armed henchmen. There is some of that in this story and Diego Olortegui’s artwork does plenty to make that a visual spectacle. However, it’s the family drama that really sets this issue apart. 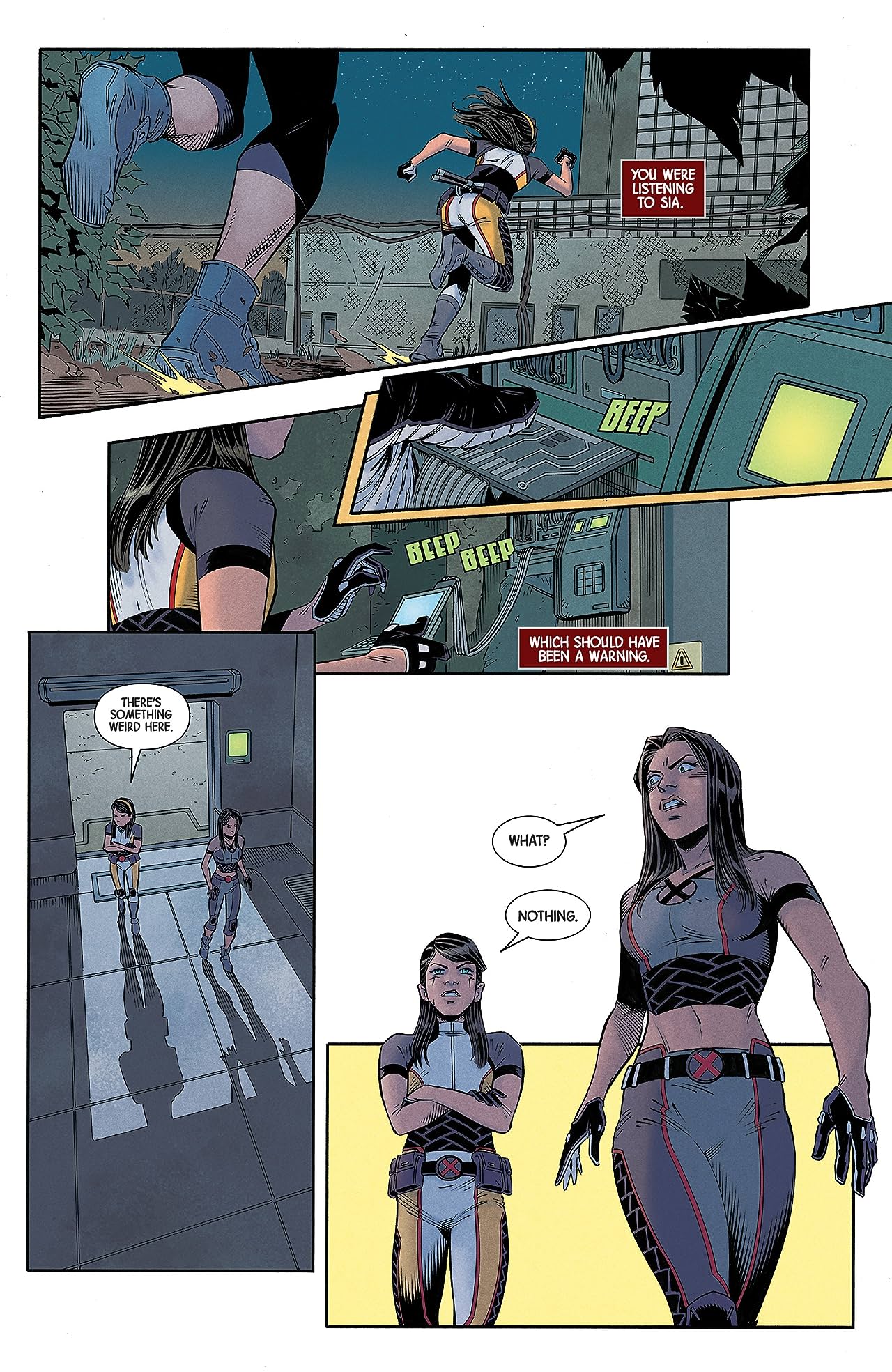 If you’ve been following the evolution of Laura and Gabby’s relationship since her debut, then the events of “X-23 #11” are genuinely heartbreaking. These two have steadily become a real family in their brief time together. Now, they’re being torn apart by bitter disagreements and painful choices.

Both Laura and Gabby experience the heartache. Even if you haven’t been following their respective stories, it’s easy to appreciate the bitter divide between two sisters. It happens in the real world and without mutant powers. Sometimes, things between siblings go bad and they drift apart. Seeing that happen with Laura and Gabby is nothing short of tragic.

It’s bittersweet, but it also helps set the stage for the future of both characters. “X-23 #11” is one of those comics that doesn’t avoid a difficult moment between two characters who no longer see eye-to-eye on an important issue. Even within family, these moments happen. This one was inevitable, but Tamaki and Olortegui made sure this one hit hard in all the right ways.

With Logan back from the dead, it promises a very divided Wolverine family, to say the least. For a family that has been subject to cloning experiments, constant torture, and even a trip to Hell, it’s a tough situation, but one that tends to make them all more badass in the long run.