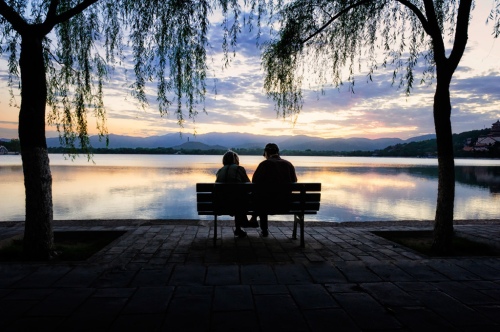 I talk a lot about love on this site. Whether it’s in the novels I write, the short stories I tell, or the ways it may save our species in the future, I like to think I contemplate love more than most men will dare admit. I make no apologies for that. I am a self-proclaimed romantic. Make of that what you will.

As much as I love writing and talking about romance, though, there’s no substitute for love that’s real. It’s not some idealized concept or an elaborate sub-plot. It’s a real feeling shared by real people. There’s no need for fantasy because it’s there for all to see. No story, novel, or fairy tale can ever come close to capturing its essence.

I know this because recently, I had a chance to see and reflect on what real love looks like, albeit under tragic circumstances. Earlier this month, one of my aunts passed away. It was sudden and unexpected. She was in her 70s and she had some health issues, but none that weren’t manageable. Her passing caught a lot of people off-guard and broke a lot of hearts, none more so than my uncle.

I remember speaking to him a day after she passed. I could hear the pain in his voice over the phone. He kept saying that he didn’t just lose his wife of nearly 50 years. He lost his best friend. It was a truly heartbreaking moment. I wish I could put into words how it felt, but I don’t think those words exist. Even if they did, they would be too difficult to write.

In the days that followed, I met up with friends and family who knew my aunt. She was a hell of a character, one who would’ve found a role in any epic story, from a superhero comic to ancient folklore. She was the kind of person who could affect you with only her presence. She didn’t have to say or do anything to make an impact. Just being there was enough.

My uncle felt it more than anyone. Just talking to him and seeing him as we mourned her, I got a chance to witness what true love actually looks like. It’s a love that transcends many of the stories we tell about it. It’s something that becomes a part of you, one that just grows stronger with every passing year. Then, when that part dies, you feel it and it hurts.

However, the fact that it hurts lets you know just how real it was. My uncle didn’t avoid that. He let that pain show. Keep in mind, this man once served in the military. He’s one of the toughest guys you’ll ever meet. He’s not someone who hurts easily. Even when he does, he knows how to endure it. This was one case where he didn’t try to endure. He just let it show.

Say what you want about love being cheesy. When it’s that real, it’s powerful. It can be overwhelming too. Regardless of your gender, your background, or your capacity for strength, it’ll hit you harder than anything. That’s what makes it scary. For some people, it’s just easier to be cynical.

That doesn’t stop it from affecting us. My actually uncle met my aunt by accident. Less than a year after that meeting, though, they got married. They knew what they had was love. They didn’t run from it. They ran towards it and they never let go of it. For someone like me, who has only contemplated stories about such powerful love, seeing it manifest in that moment was profound.

My uncle’s heart is still wounded, but it isn’t broken. In talking to him, I could sense him finding strength in that heartbreak. He spent nearly half-a-century with my Aunt. They had forged many wonderful memories together, having two kids and over a half-dozen grandkids. Her passing doesn’t damage those memories. If anything, it makes them more precious.

I hope everyone, at some point in their lives, gets a chance to see that kind of love first-hand. Whether it’s among relatives, friends, or with your significant other, a love that real is something that extends beyond the people who feel it. We may never be able to completely capture it in a love story, but we can still experience it and appreciate its power.

I’m going to really miss my aunt. She was a wonderful woman who did so much for me and my family. I’ll still never miss her as much as my uncle, though. He loved her in a way that words and thoughts can never express. The fact their love existed in this crazy world and I had a chance to see it gives me hope. To all those who have lost someone they truly love, I like to think we can share that hope as we move on.