Christmas may be over, but for fans of comic books, every Wednesday is Christmas. With every new week comes a new batch of comics and the world is a little more awesome because of it. In the past, I’ve singled out a single comic and tried to do a thorough review. However, in the interest of being more concise, I’ve decided to switch things up a bit.

From here on out, I’m going to use each New Comic Book Day to share my personal pull list. These are all comics I go out of my way to read the moment they’re available, usually through sites like Comixology. Sometimes, I’ll buy more if I have some spare change by the end of the day.

From that list, I’ll still single out a comic that I highly recommend. Please let me know if you like this new format or if you prefer I go back to the old one. Thanks and to all my fellow comic fans out there, I hope it’s the first of many awesome New Comic Days for 2020 and the decade to come. 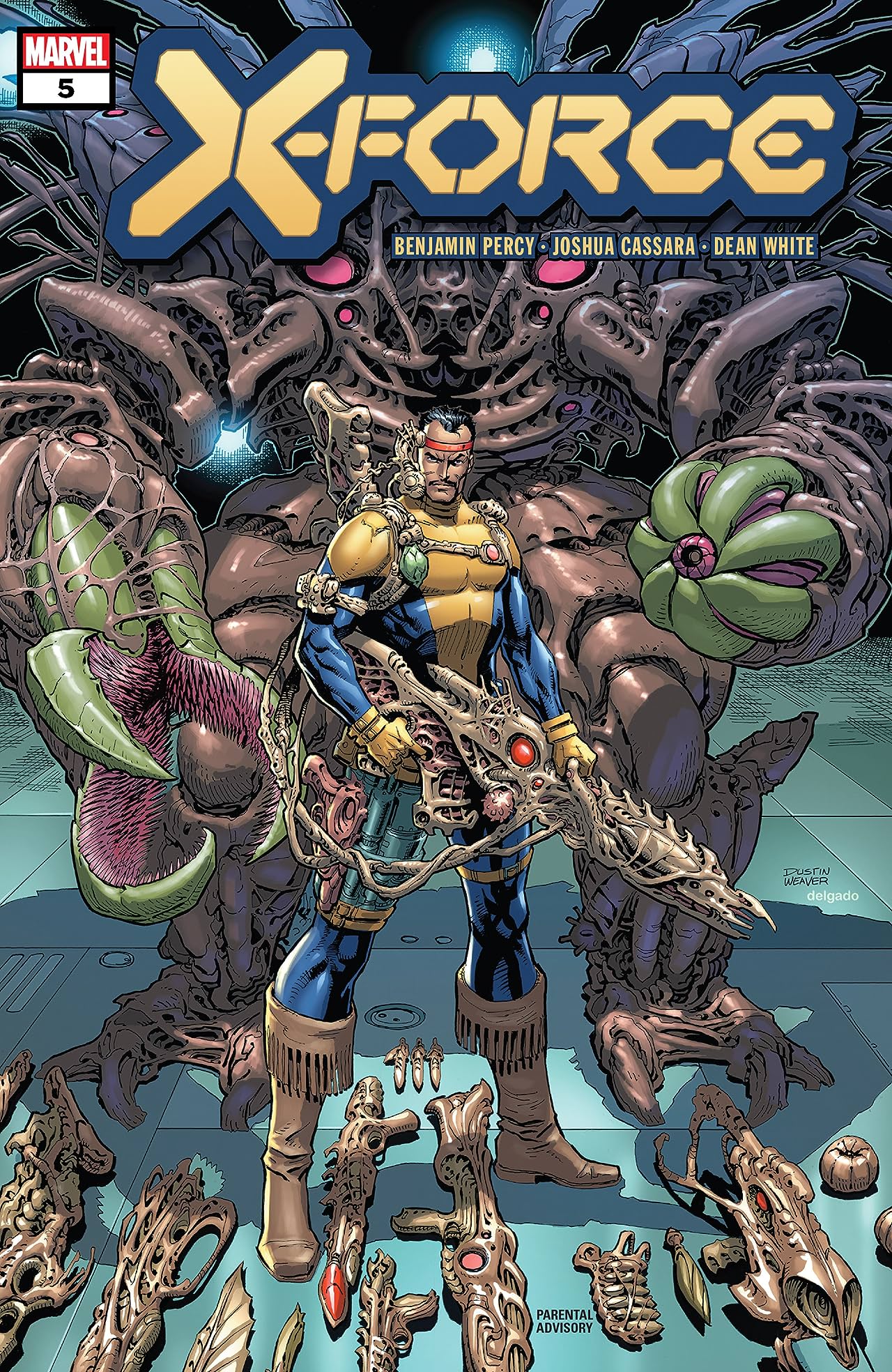 Some comics have broad appeal and multiple themes meant to appeal to as many people as possible. X-Force is not one of those comics. You don’t pick up an X-Force comic looking for big philosophical insights on the universe, the human condition, or what it means to be a hero. You go to an X-Force comic when you want to see gratuitous violence, pissed off mutants, and reasons as to why Wolverine drinks so much whiskey.

This comic has all of those things, including whiskey. The plot is simple. A group of well-armed mercenaries have invaded Krakoa. In the last issue, they managed to split Wolverine in half. In issues before that, the ones who hired them peeled off Domino’s skin to tap her powers. Even by X-Force standards, that’s still pretty brutal.

What makes X-Force #5 my pick this week is how Wolverine, Domino, and an emerging cast that includes Forge, Beast, and Jean Grey respond. They’ve been hit. They’ve been brutalized. They’ve been wounded and scarred in ways that no healing factor can treat. Now, they have a chance to take it out on the people responsible and they don’t hold back.

The results are bloody, violent, and compelling on multiple levels. Krakoa is supposed to be a place where mutants can finally enjoy some semblance of peace. Certain people in the world just can’t have that. Those people aren’t going to be reasoned with or convinced otherwise. That’s where X-Force comes in. It’s a dirty, ugly, unsanctioned aspect of making Krakoa work, but it’s necessary.

X-Force #5 reinforces that to an extreme. It also hints at where they’ll have to direct their gratuitous violence next. With the possible exception of having a weak stomach, there’s every reason to love what this book delivers. 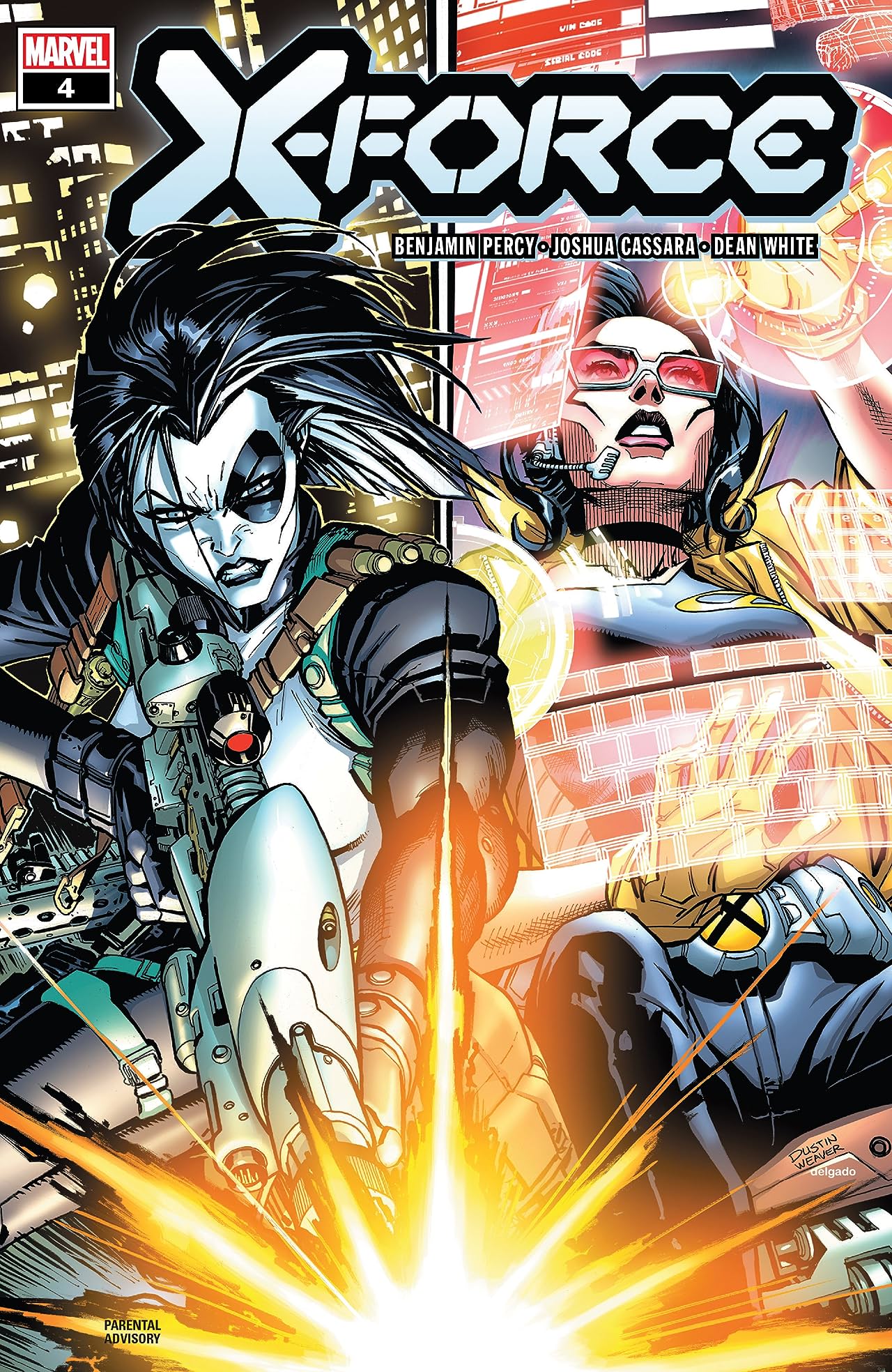 There are some people in this world, as well as fictional worlds, who will never be content to let things progress for the better. No amount of mutual benefit, understanding, or sincerity will be enough. They’ll always seek to destroy anything that might change the world they know, even if it’s for the better. They won’t just complain about it on social media, either. They’ll resort to the worst kinds of violence.

These are the people that X-Force deal with. Throughout their history in the X-Men comics, they’ve dealt with the dirty stains of humanity that never wash out, no matter how hard you scrub. They’re the ones tasked with confronting these threats, be they human or mutant, with a level of gratuitous violence that you won’t see outside of “Game of Thrones” reruns.

The need for X-Force, as well as their violent tactics, is one again reaffirmed in “X-Force #4.” At a time when mutants have made genuine progress through Krakoa and a new geopolitical role in the world, they’re still subject to hatred, attacks, and atrocities.

In the first three issues of the series, writer Benjamin Percy demonstrated that, despite having their own nation in the form of a living island and the ability to resurrect dead mutants, they’re still vulnerable.

Charles Xavier got shot. Domino was captured and had half her skin ripped off. The fact that any of this can happen, given all the resources at the X-Men’s disposal, is wake-up call and a reminder as to why X-Force isn’t just necessary. It needs an overhaul. 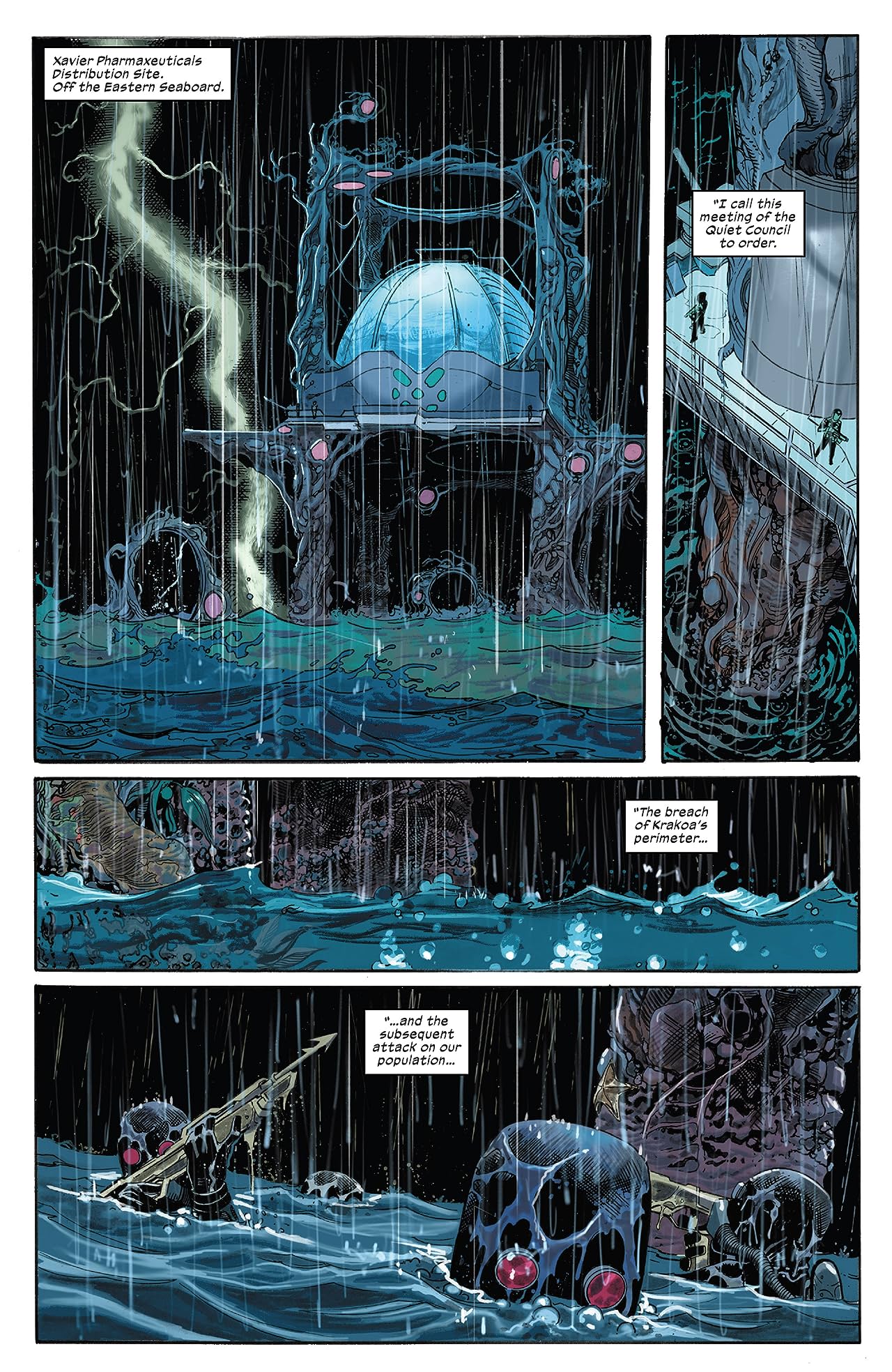 That overhaul begins to unfold in “X-Force #4” and in the midst of another mysterious attack, no less. While this one didn’t end with anyone getting shot or flayed, it did hit Krakoa in the wallet, which can hurt as much as getting shot. The nature of the attack and who is behind it remains a mystery, but X-Force is put on the front lines.

However, this is not the same X-Force that that Rob Liefeld brought to live during the grunge-fueled heyday of the 1990s. They’re not operating completely in secret as some secret kill-squad that everyone is better off not knowing about. Instead, Percy sets them up to be Krakoa’s version of the CIA, complete with its own Seal Team 6.

It’s somewhat of a shift for what X-Force has historically been in the X-Men comics, but it fits perfectly with the current situation surrounding mutants and Krakoa. Mutants are no longer scattered, isolated, and running from killer robots at least once a week. They have their own nation, language, and emerging culture. Protecting it requires something more organized than a shadowy kill squad.

That means more assistance from those who have traditionally argued against the merits of secret kill squads, such as Beast and Jean Grey. However, after seeing Charles Xavier get shot in the head and Domino get tortured, they’ve become a bit more pragmatic in handling these kinds of threats. 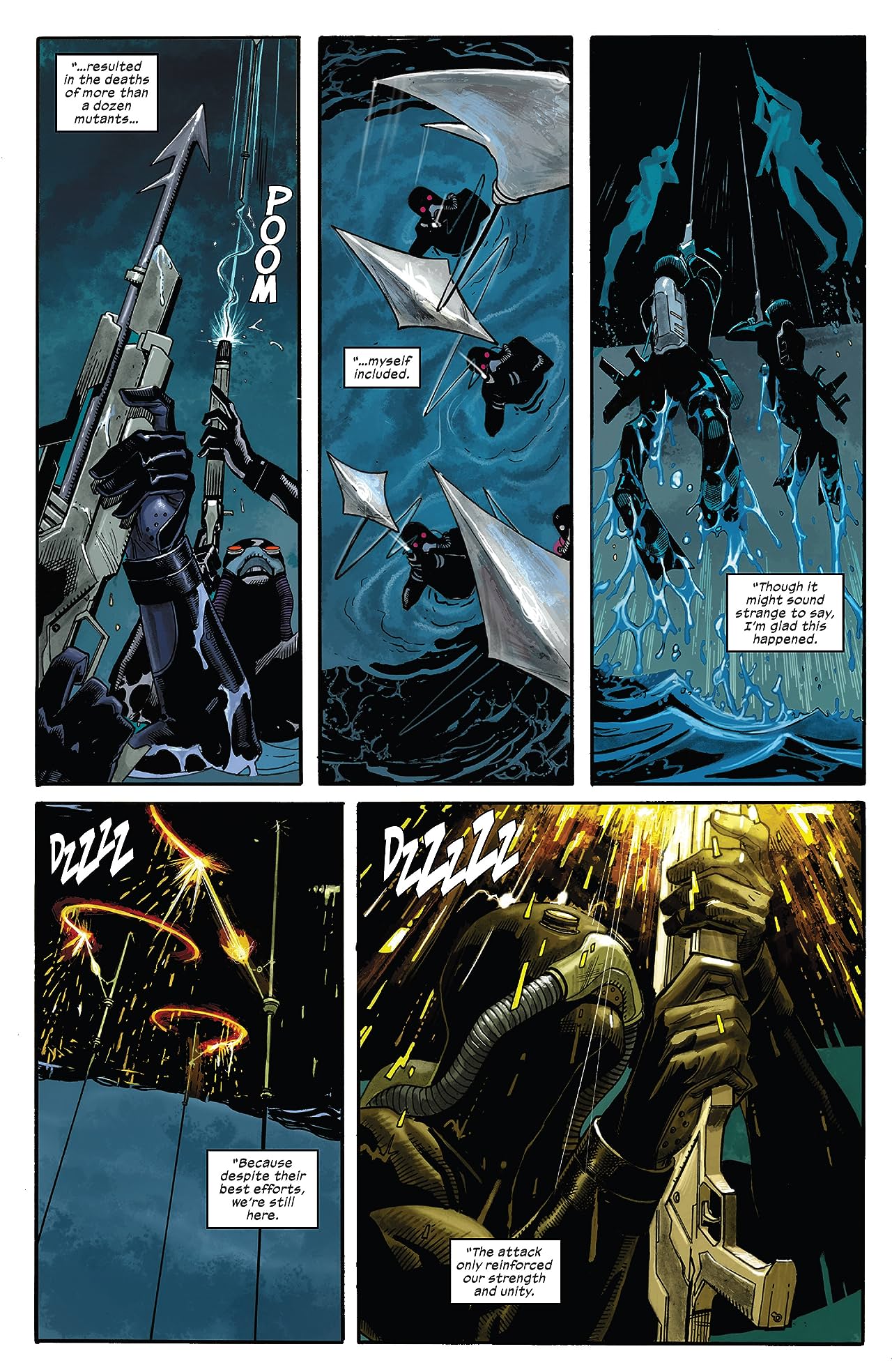 The events of the first three issues caught them off-guard. They try to be much more proactive in “X-Force #4,” investigating the attacks and organizing a response. Naturally, Wolverine is part of that response since many of the threats X-Force deals with require significant stabbing. Now, armed with Krakoan weapons provided by Forge and Kid Omega’s attitude, they’re ready to be a new kind of X-Force.

It may not be the kind of profane, brooding, blood-soaked X-Force we’ve seen in the past, but it feels appropriate for the X-Men’s current situation. Jonathan Hickman set up a very different set of dynamics for the X-Men through “House of X/Powers of X.” Percy just creates a version of X-Force that fits within the context of these dynamics.

Having a team like this doesn’t just feel necessary after the events of the first three issues. It feels personal. These weren’t just angry protests or hate threads on Twitter. Someone managed to attack their home and shoot one of their most powerful figures in the head. However one might feel about X-Force’s violent tactics, there’s no denying that they’re as motivated as they ever were. 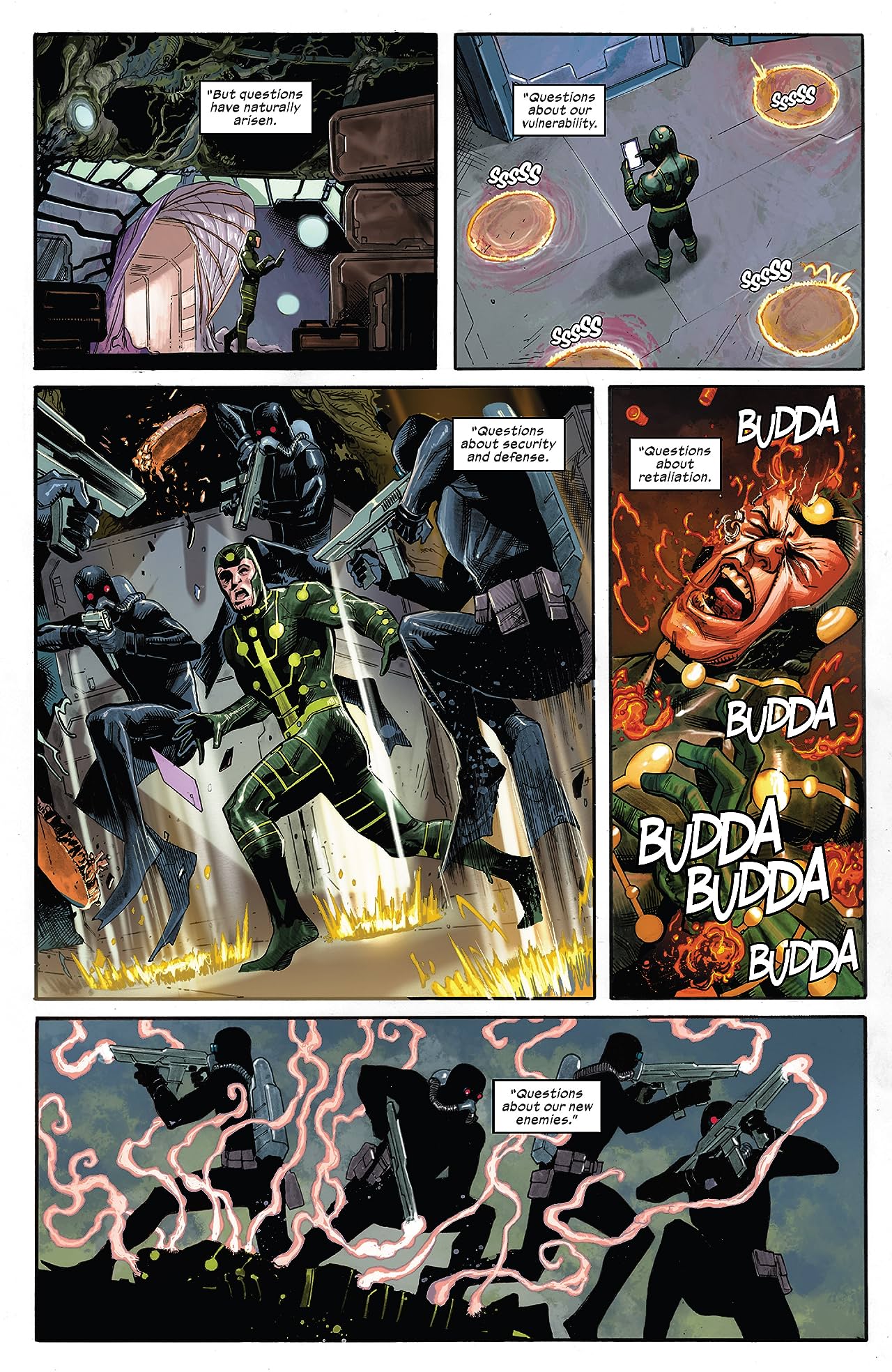 For a quality X-Force comic, it’s not enough to just have ample violence and an attitude ripped from mid-90s heavy metal music. There needs to be a greater context to the added violence, preferably one that complements the current status quo of the X-Men comics. With “X-Force #4,” Percy succeeds in creating that context and artist Joshua Cassara gives it the necessary grit.

The overall lineup for X-Force is still somewhat small, but it has plenty of room to grow. After what happens on the final page, it’ll have to for reasons that are as obvious as they are bloody. The threat X-Force has to kill is still somewhat vague. Only a few details have come out thus far, but the only detail that matters is that they can hit Krakoa where it hurts and they’re not inclined to be diplomatic about it.

X-Force has always billed itself as a superhero team that relies on less-than-heroic methods to get the job done. They’re not a team that wears flashy costumes and parades alongside other, more reputable heroes. They do what they do in the shadows and don’t mind incurring some extra bloodstains to do it.

“X-Force #4” starts with something bloody, but ends with something bloodier. Given the nature of the emerging threats they face and the wounds they’ve already incurred, it promises to get even bloodier with future issues. It’s everything you want in an X-Force comic and then some.