Why Standardized Tests Make You (Feel) Dumber In The Long Run

As I write these words, there are millions of young people out there who are either dreading an upcoming exam or recovering from one too many all-night cram sessions. This is that time of year, after all. The sweet freedom of summer vacation is almost within our grasp. We just have to survive a few more soul-crushing, brain-draining final exams.

Like the final boss in a video game, exams and standardized tests are the migraine headaches of modern education. They are that stabbing pain at the base of every teenager’s spine. They know it’s coming. They know it’s going to be stressful. The most they can do is brace themselves, study, and hope they don’t throw up at some point along the way.

I get the logic behind these tests. I think even the students do, minus the ones whose only goal in life is to become an Instagram model. I don’t doubt that the intentions behind standardized tests are good. They’re supposed to help gauge the effectiveness of our education, revealing just how well we’ve retained the material.

I don’t doubt the merit behind that. A team of underpaid, under-appreciated teachers just spent nine months of their lives trying to cram a bunch of information into our developing brains. At the very least, they want to make sure that time wasn’t wasted. How devastating would it be if the found out all that time, effort, and chalk board lectures had been for nothing?

Well, with the utmost respect to the teachers and students who have to deal with this crap, there might be a repugnant stench in the air. As good as the intentions may be with standardized testing, they have a long list of issues. Just last month, the Washington Post listed at least 34 problems with these tests. With the memory of these tests still painfully fresh in my mind, I have a hard time believing there are only 34 problems.

There’s a growing body of evidence that standardized testing does not translate into better cognitive skills. It doesn’t lead to better memory, better attention, or better reasoning skills. It doesn’t even reveal how well you know the material. Even if you do remember enough to ace the test, it’s rare for students to actually retain that knowledge. 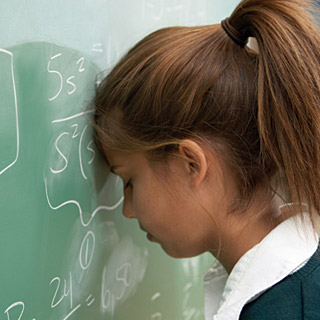 That shouldn’t surprise anyone, especially those whose memories of high school is still somewhat fresh. Depending on how traumatic your teenager years were, you probably remember not caring much about actually knowing the material at hand. You only cared about passing the test and not triggering an awkward parent/teacher conference.

In essence, that’s the biggest issue with these tests. That’s why, in the long run, they make us feel dumber. Just passing a test doesn’t make you smart. It just makes you good at passing a test. A lot of people can throw a football well. However, just being able to throw a football doesn’t make you as skilled as Peyton Manning. Just ask Ryan Leaf.

It’s just as bad for the teachers. They dedicate their time, energy, and patience to teach a bunch of immature kids and hormonal teenagers what they think is important. However, their effectiveness, as a professional, is entirely contingent on their ability to get these thick-headed kids to pass a goddamn test every year. Even doctors and lawyers don’t have subject themselves to that kind of frustration. I can certainly attest to the inefficiencies of these tests. It’s pretty much the only skill that was regularly emphasized throughout high school. Every subject in every class felt like a prelude to one goal, which was to pass the test. That was always at the forefront of my mind. Actually knowing and caring about the subject was always secondary.

The only subjects I did know anything about happened to be subjects I had a genuine interest in. I liked writing, history, science, and even math to some extent. However, a lot of what I learned on those subjects wasn’t necessarily taught. I sought that knowledge out on my own.

Contrary to popular belief, not every teenager is a total slacker whose sole goal in life is to live out the rest of their days on the couch watching Netflix. Many are genuinely curious about certain topics and not all of those topics are related to food, sex, and punk rock music. If they want to learn more about something and you give them the opportunity, they’ll take it.

For me, personally, it was writing. No teacher or guidance counselor needed to guide me to do that. It’s just something I started doing. My parents already had a computer so I had all the resources I needed. Thanks to a vivid imagination inspired by comic books and cartoons, I had plenty to write about. I haven’t really stopped since.

There were other topics that intrigued me too. Growing up, I was also interested in history, especially 20th century history. There was a period where I watched every World War II documentary on the History Channel I could. It got to the point where I knew the names of generals, battles, and dates better than my teacher.

It culminated one fateful day during my sophomore year of high school. I was in my history class and, much to my relief, we were focusing on early 20th century history. My teacher was lecturing, going over the textbook as they so often do, and at one point she got a date wrong. I, having the piss-poor social skills I had, just corrected her on the spot.

For some teachers, that would be a one-way business class ticket to getting detention. For this particular teacher, though, she smiled at me and thanked me. That was a proud moment for me. Later on, when we did take a test, I got a perfect score. I didn’t really need to study for it either. I knew the material because I wanted to know it.

That’s both the key and the paradox that dooms standardized testing. It tries to create a one-size-fits-all standard with which to gauge every student. It ignores the fact that not every student is going to want to know the names of every Russian Tsar or how to use quadratic equations. Some students really are smart, just not on certain subjects.

On top of that, some students just aren’t good test takers either. I know this because I’m one of them. I often had to give disclaimers, of sorts, to my teachers about my test-taking skills. Some of it was due to nervousness. Some of it was just due to the mental fog that comes with the stress of taking a test. Some people can manage it well. I can’t.

The only exception, in my case, were the essay questions. I loved the essay questions because I knew I’d ace those. Writing is, I like to think, one of my greatest strengths. If I could’ve exchanged every standardized test I ever took for an essay, I’d have done it in a heartbeat. I’d have been the valedictorian of my high school.

I’m not going to sugarcoat it. Standardized tests made me feel dumb, but I know I’m not dumb. I couldn’t manage this blog, keep track of major events in comics, or stay up-to-date on the status of sex robots if I were. I genuinely worry that a lot of impressionable, vulnerable kids will feel that same sentiment by taking these tests. They may never realize that these tests are not a reflection of how smart they are.

The issue of standardized testing is still ongoing and still controversial. There are a lot of moving parts to education, especially in large countries with diverse populations. There’s a lot of room for improvement, but an important first step is acknowledging the problem.

As usual, John Oliver has already done a far more astute job of exposing the problem than I ever will. He dedicated an entire segment of his show, “Last Week Tonight,” to it. I’ll let him fill in the blanks that I wasn’t able to cover in this post.

Sure, you have jobs, families, and taxes to worry about. Take it from me, though. If you can endure the stresses of exams and standardized tests, you can endure almost anything an adult life can throw at you.