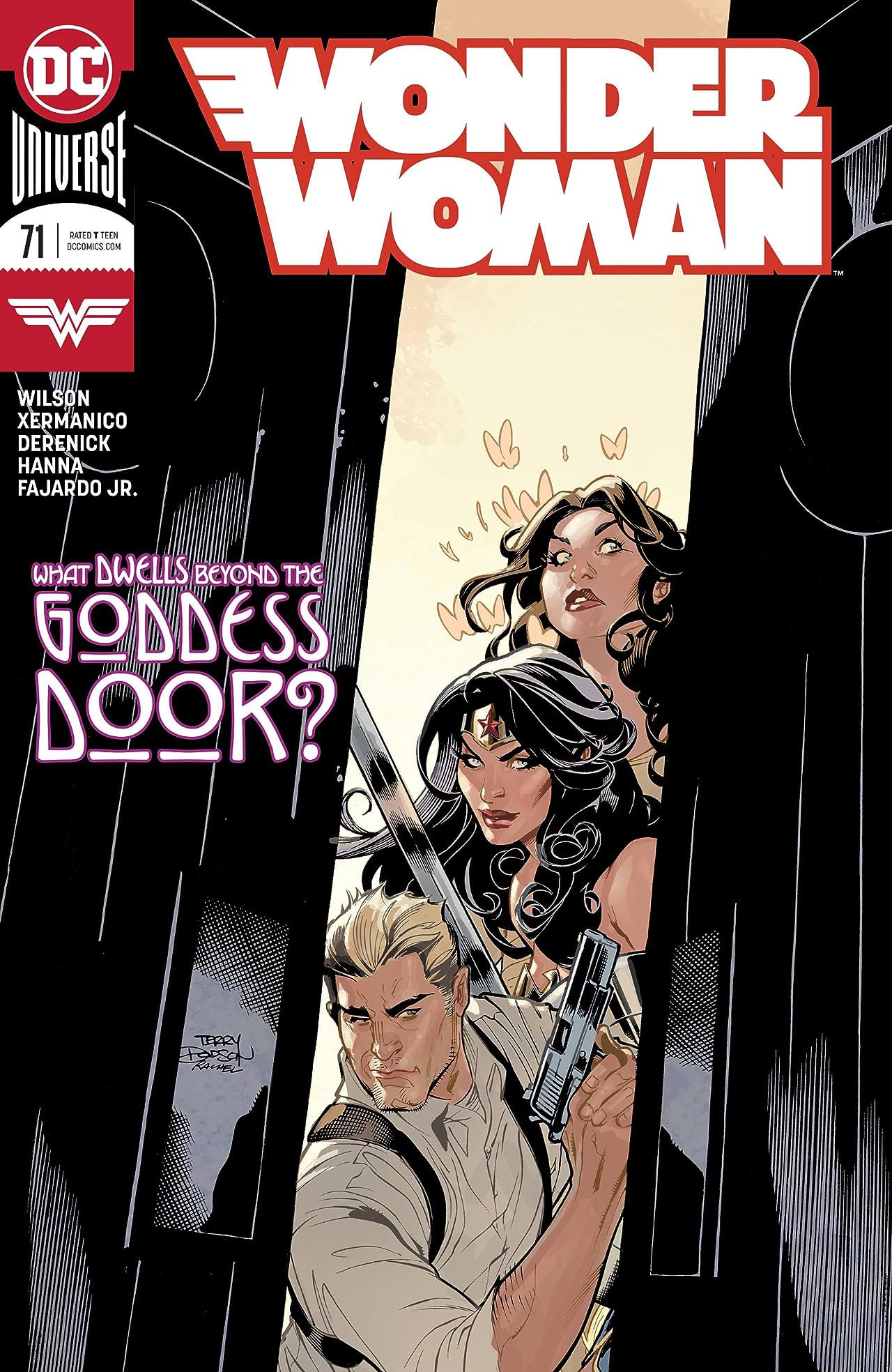 Once a week, comic book fans rejoice as pencil, ink, and imagination come together to bring us a batch of new comics. Whether they involve superheroes, gritty crime drama, sappy romance, or talking ducks in ties, great comics take many forms.

As someone who awaits every Wednesday like Christmas, I make it a point to select one comic from this crowded field that helps make the day feel uniquely festive. It doesn’t always involve superheros gods, demigods, and talking animals. This week, however, that’s exactly what “Wonder Woman #71” contains. That’s not an exaggeration. This comic contains all of that, along with a uniquely impactful story.

For the past few issues, Diana has been investigating some decadent happenings in a small town called Summergrove. At first, it doesn’t look quite as dire as some of the other godly influences that Wonder Woman has dealt with. The people of this typical community have just become a bunch of free-wielding hippies, randomly pursuing every decadent desire that enters their mind, among other things. It’s not quite as pornographic as it sounds. Wilson manages to keep things PG-13, for the most part. However, the free loving and utter disregard for Western propriety are just part of the issue. This major disruption in a community not used to public nudity isn’t due to some sudden realization that Puritan traditions are asinine. It’s a direct result of Atlantiades, the god of lust and desire.

Aside from being the offspring of Aphrodite, as well as the kind of deity that aspiring erotica/romance writers could worship, Atalantiades presents a unique challenge to Wonder Woman. Yes, she’s causing real harm to innocent people and their families by exercising her divine power, but she’s not doing it directly, nor is she doing it out of malice.

She is, like many gods in both the world of DC Comics and beings of mythology, unaware of how her power influences frail mortal minds. She doesn’t see ordinary humans with the same care and concern as Wonder Woman. Whereas Diana respects and protects them, gods like Atalantiades pity and manipulate them.

It puts Wonder Woman in a tricky position of convincing Atalantiades that what she’s doing to the people of Summergrove is wrong. The past couple issues have steadily revealed how bad things have gotten. Families are being torn apart and the community is collapsing around itself as people just abandon their responsibilities and ignore all consequences to their action.

It may seem fun, but even the most free spirit of individuals can’t avoid consequences. That’s what it means to be human. However, Atalantiades and the rest of her divine brethren don’t understand that the way Wonder Woman does. Their divinity means they don’t have to deal with the same consequences. They only have to worry when those consequences impact other gods. That’s another lesson that Atalantiades has to learn the hard way. While Wonder Woman helps her deal with the damage she did to Summergrove, her activities obscure another emerging conflict centered around her mother, Aphrodite. This conflict has higher stakes and greater consequences, mainly because it involves unleashing a mythical beast.

It’s this culmination of consequences that helps “Wonder Woman #71” stand out. There are plenty of stories that involve Wonder Woman fighting mythical beasts and protecting people from unholy manipulations. However, she ends up having to do both here and she can’t resolve both solely through fighting.

Wonder Woman can do a lot of incredible feats, but she doesn’t absolve people or gods of consequences, nor would she if she could. She can’t fight Atalantiades or the people she has influenced, but she can convince her to take responsibility. That’s not as easy as a simple scorn or lecture, but it does make for some revealing exchanges. 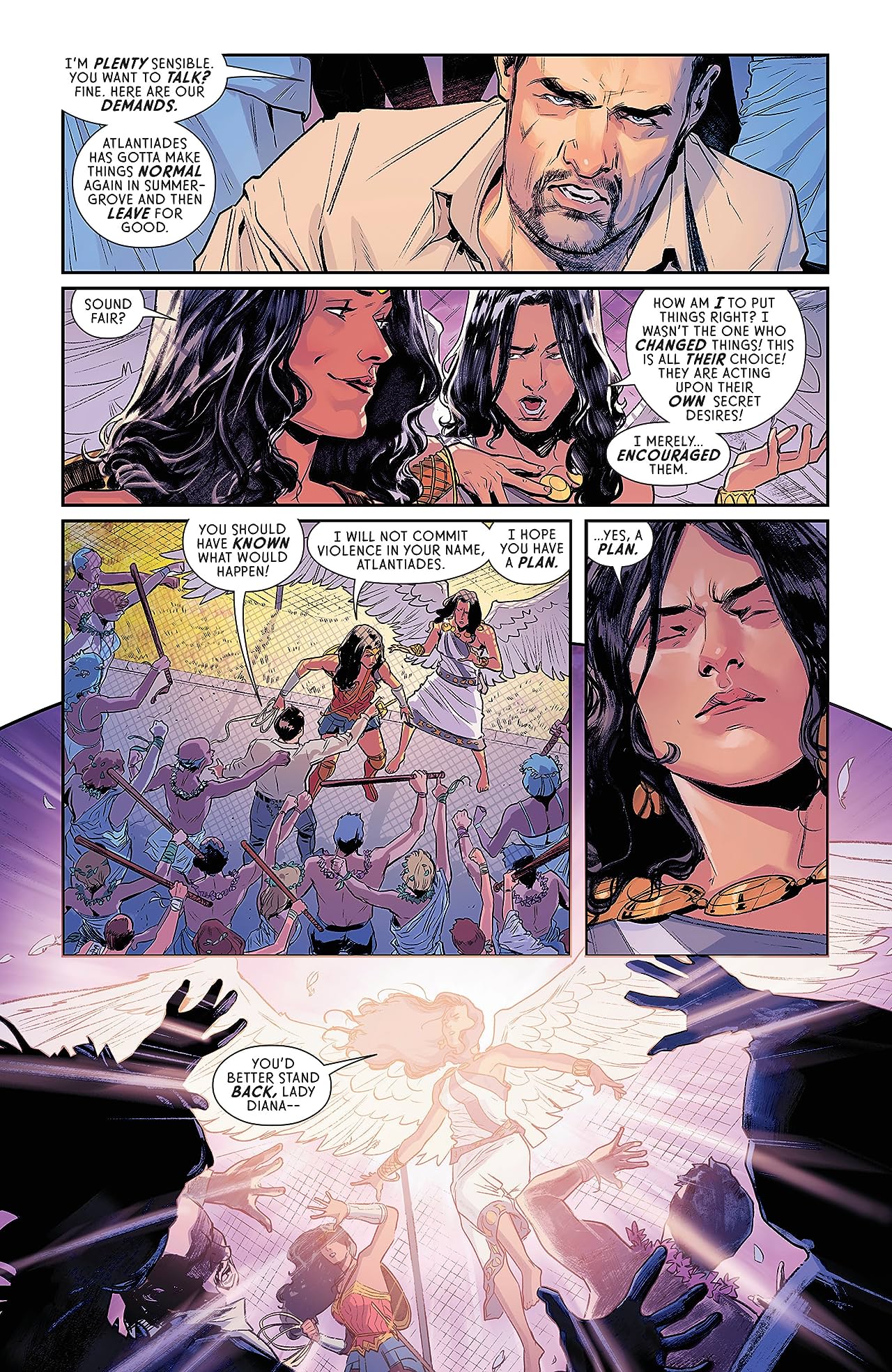 Wilson, like many other accomplished Wonder Woman writers, explore the unique and strange perspective of divine beings like Atalantiades. That’s understandable because they’re not mortal. They don’t see mortality, desire, and consequences the same way an ordinary person in the suburb sees it. In many respects, it reveals just how unique Wonder Woman is because she goes out of her way to relate to ordinary people.

Atalantiades makes clear that she doesn’t see love and desire the same way as Diana. Throughout this story arc, even other gods like Aphrodite go out of their way to denigrate Diana’s perspective on matters of love and mortals. She sees it as something empowering and intimate. They see it as something chaotic and corrupt.

“Wonder Woman #71” doesn’t entirely resolve that argument, but it does make a compelling case for each side. Atalantiades demonstrates what happens when love and desire run rampant. It’s sexy and even humorous, at times, but it’s also flawed and Wonder Woman helps belabor that.

As more consequences of Atalantiades’ actions play out, Wonder Woman has a chance to make her point in other, more direct ways. This is also where the artwork of Tom Derenick and Xermanico get more vibrant as divine debates turn into divine clashes. It helps highlight how strong Wonder Woman can be with both her words and her fists.

“Wonder Woman #71” is not the endgame of this larger story surrounding Atalantiades and Aphrodite, but it is definitely the most dramatic. Wilson explores some pretty heavy topics in this story, touching on gods, love, and the frail mortal beings that get caught in the crossfire. It puts Wonder Woman in some difficult situations in which her compassion has to be as strong as muscles.

As always, she rises to the occasion and inspires more awe and wonder in the process. That’s what makes her Wonder Woman.