There’s an unwritten rule in superhero comics. Heroes can enjoy a happy ending every now and then. However, it can only go so far. For every happy ending, there must also be a setup for the next conflict. It also can’t be too happy. The struggle can never stop or slow down. More epic battles must follow. Where else will Marvel and their Disney overlords get ideas for new billion-dollar movies?

Sometimes, the happy endings are as short-lived as they are shallow. This is especially true of X-Men comics. Their struggle is more complicated than fighting hordes of Hydra soldiers or battling invading Chitari armies. Sure, they regularly battle killer robots, but the primary source of their problems come from hatred and fear. There’s only so much they can triumph over that. A typical internet comments section is proof of that.

As a result, any victory the X-Men enjoy seems fleeting. Any semblance of a happy ending or true progress comes off as shallow or temporary. That has been my experience, as a lifelong X-Men fan. Then, “House of X #6” comes along and in the span of a single book, those unwritten are bent, broken, and redefined.

Throughout the X-Men’s colorful history, there have been many defining moments. Unfortunately, most of them often involve tragedy, destruction, and decimation. The moments that involve a triumphant, happy ending that feels like real progress in their struggles are few and far between. That only makes “House of X #6” more precious in the grand scheme of things. 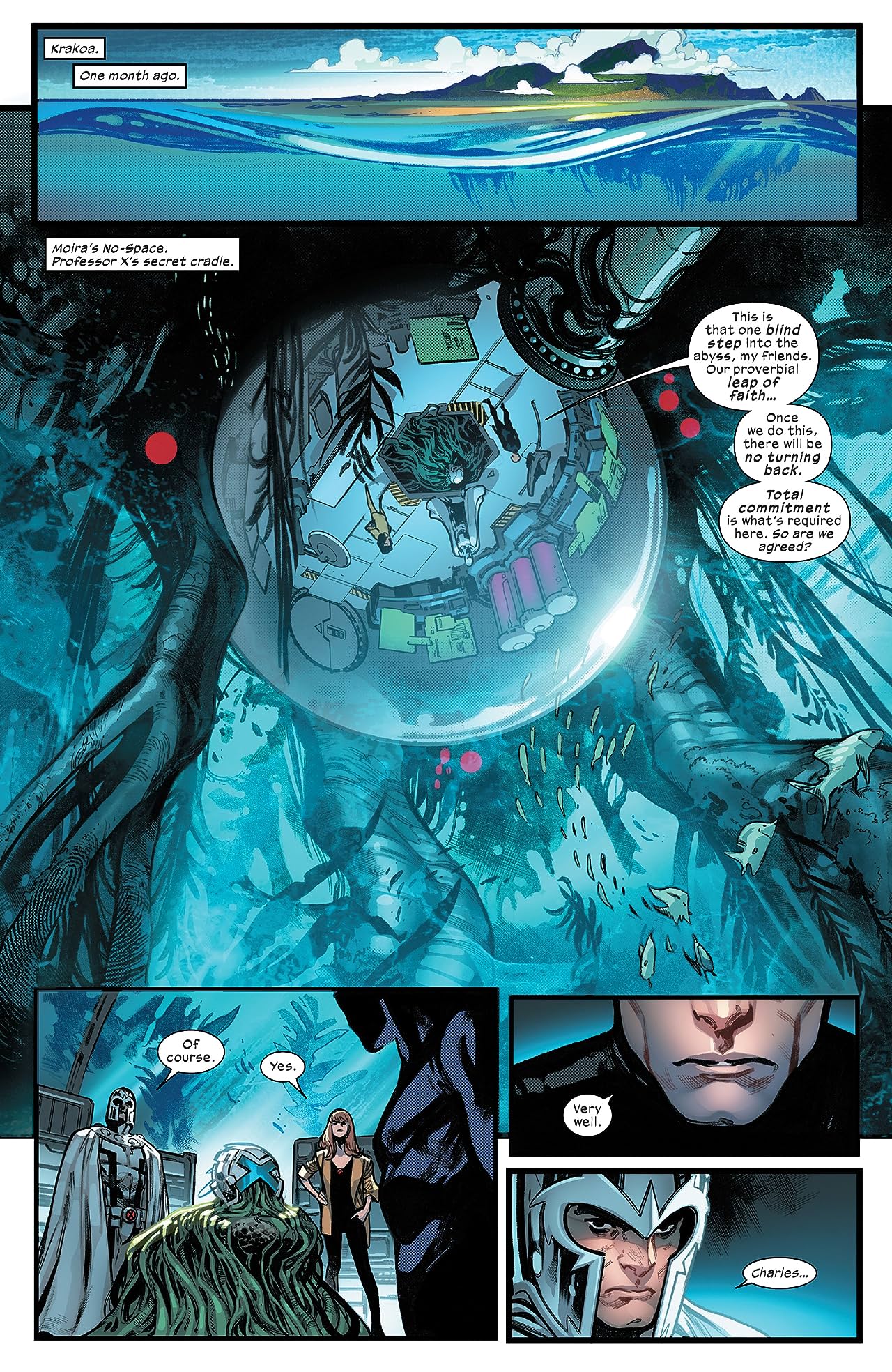 This epic, world-building narrative began with a simple proclamation from Charles Xavier. While humanity slept, the world changed. In “House of X #6,” the sheer breadth of that change becomes clear. Xavier doesn’t just announce to the world that things are different. He explains why and how they got to this critical point.

It’s the kind of speech that leaves you anxious, astonished, concerned, and elated, all at the same time. He doesn’t talk around the truth or rely on alternative facts. He lays out clearly what mutants have been through. Even if you haven’t been following the X-Men comics for the past several decades, you get a clear understanding of how they got to this point.

They’ve been bullied, attacked, ignored, and driven to the brink of extinction more than once. They’ve clashed with other superheroes while being held to a different standard. In a world where so many other people have superpowers and aren’t subject to constant killer robot attacks, mutants are seen as a menace.

Now, they’re not just outcasts fighting for their lives and working towards impossible dreams. They’re a full-fledged society. They now have a home in Krakoa, which is now a full-fledged nation. They have their own culture and identity that they’re willing to fight for. These all feel like changes that are exceedingly overdue. Writer Jonathan Hickman finally put it into words while artist Pepe Larraz gave it vibrant visuals. 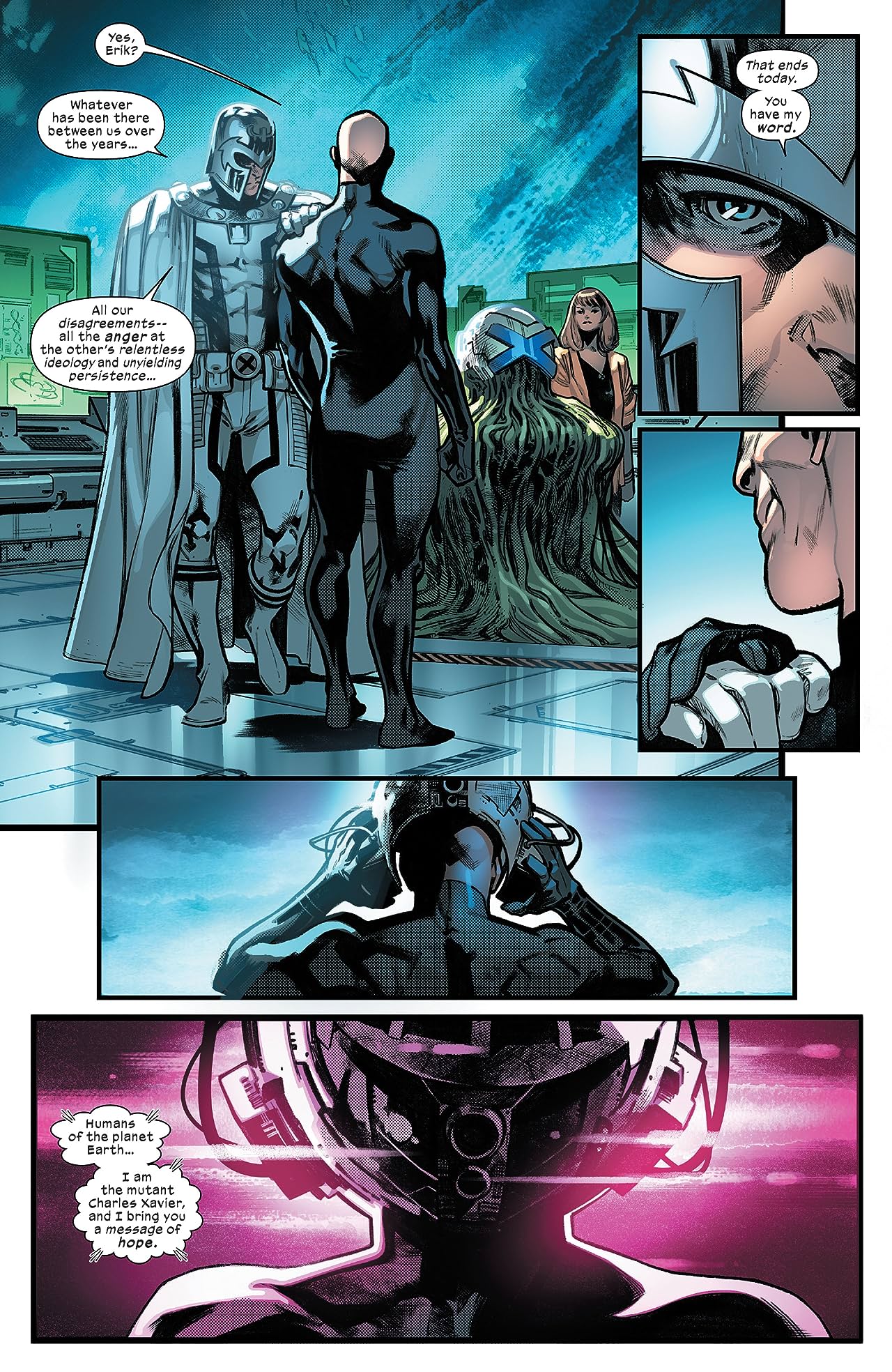 It’s a beautiful, cathartic moment that X-Men fans of all kinds can appreciate. On top of this momentous announcement, Hickman adds a few more details to the world-building. Now that mutants have their own nation, they have to go about governing it. It’s the kind of detail that tends to get overlooked in most superhero narratives, but it’s those same details that give depth to this emerging status quo.

The government of Krakoa is not overly complicated, but it’s still comprehensive in its vision. Hickman does not skimp on the details. We even get to see how Krakoa handles difficult issues, such as major laws and what to do with those who break them. It’s not quite like watching a mutant version of C-SPAN, but it gets the point across.

This isn’t just mutants consolidating their power. They’re trying to function as a real nation with real connections in the international community. They’re not going to be some isolated enclave. They actually have something to offer the world with the miracle drugs Krakoa produces. However, they’re not treating them as bargaining chips or gifts. They’re real assets with which to create standing in the world.

It’s uncharted territory for mutants. It also opens the door to a new host of complications, but for once, they don’t involve drawing battle lines between humans and mutants. Xavier still seeks peace, but not through impossible dreams anymore.

This is a huge shift for Charles Xavier’s character. It’s a huge shift for the X-Men, as well. They’re not just a team of mutant superheroes anymore. They’re something greater and “House of X #6” is their way of announcing that to the world. 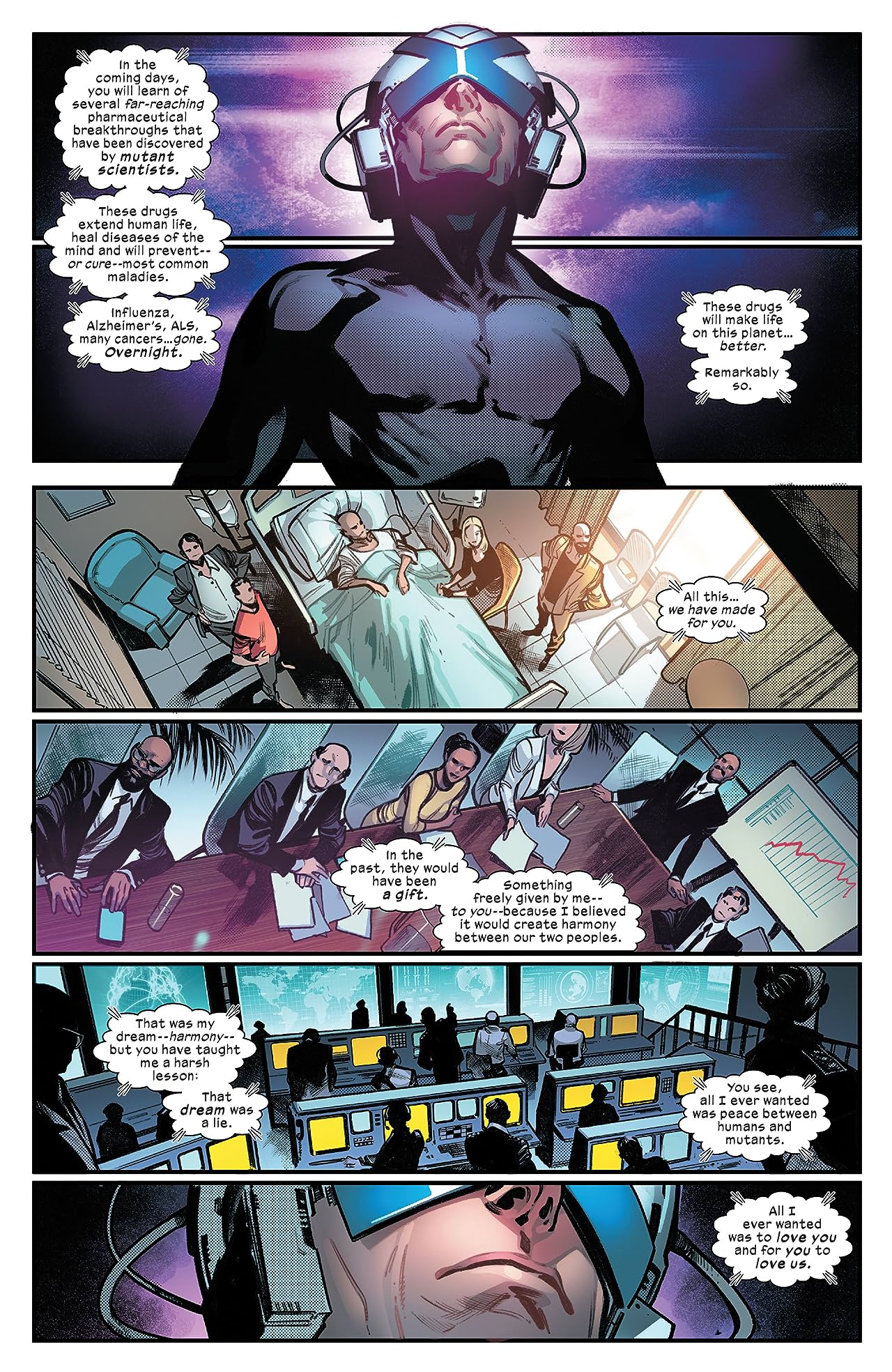 I won’t spoil the many other ways Hickman and Larraz explore this exciting new world. There are plenty of moments that set the stage for a very different kind of struggle with the X-Men. There are also a few hints that they’ll be dealing with a few threats down the line, some more familiar than others. That’s unavoidable, both for superheroes and blossoming nations.

However, I will spoil one critical detail. “House of X #6” gives the X-Men, mutants, and long-time fans a reason to celebrate. It wasn’t that long ago that the X-Men were in a dire state. Marvel was going out of their way marginalized them in favor of propping up the Inhumans. Major characters were being killed off, left and right. Now, in wake of this issue, those dark days feel like distant memories.

The events of “House of X #6” feel like the end of a long, tumultuous period of tribulations and the beginning of a new era. It’s not all doom and gloom, for once. There’s reason to be happy. There’s reason to grab a beer and celebrate. If the X-Men comics were to end with this issue, it would be a damn good ending.

A new world has been built. A new era has arrived for the X-Men. It’s as satisfying as it is overdue. To X-Men fans of all kinds, get some friends, grab a cold beer, and have a party. Hickman has given us a reason to celebrate.