Online Dating: Should Give It A (Third) Try?

We live in an era where people have a more intimate relationship with their smart phone than they’ll ever have with another person. Think about it. People tell their phone all their dirtiest secrets, trust it to keep those secrets, and turn to it in their time of need, no matter how serious or trivial the situation may be. In the grand scheme of things, a smart phone is a lover, an accomplice, a therapist, and a butler all rolled into one.

There may come a day when our phones and our technology will take the place of lovers. There are some parts of the world where sex robots are already a thing. Until then, though, we will continue to seek out human companionship in some form or another.

I certainly love my smart phone, but I’m not going to form an intimate relationship with it. I can’t make love to it. I can’t enjoy foreplay with it, which is kind of important to me. Maybe I’m old fashioned by today’s standards, but I’d rather have a person as a lover.

This is something I’ve talked about before as a concern. I am in my 30s now and I’m a single male. The older I get, the greater the creepiness factor will escalate. I don’t want that. I don’t want to be the creepy guy on the block. I’m already the guy on the block who wears flip-flops and a bathing suit to a coffee shop. That’s the most my reputation can handle.

So as I was getting together with friends and family for the holidays, I started having conversations about my goals for 2017. Naturally, most of those goals involved being a successful erotica/romance writer and a more awesome guy in general. Those have been my goals for years now and I like to think I’m making progress in both.

That said, one goal in particular came up and I’m the one who brought it up. Maybe it was due to me seeing so many members of my family find love in their own way. Maybe it’s just the male version of a biological clock starting to go off in my 30-year-old brain. At some point, I do want to find love again and I’d like to make that part of my goals for 2017.

The problem is I have piss poor social skills. I can write novels. I can talk about comics and football for four hours straight. I can work out until I’m a big mass of muscle and sweat. I still can’t, for the life of me, find a way to properly interact with the opposite sex on a face-to-face level. I struggle to enter that mindset where I can use my words and my gestures to win a woman’s heart.

That’s a big reason why I haven’t had a serious girlfriend in a number of years now. It’s for that same reason I really want to change things up for 2017. One approach that many family members suggest is to use online dating. That’s something several family members have used to great success in some form or another. The problem is I have experience with it too and it’s not all that pleasant.

A while back, I did give online dating a try. In fact, I gave it two tries. I signed up for two popular sites and since I don’t know any good lawyers, I won’t name names. I’ll just say you’ve probably seen commercials for both of them.

I put some serious effort into these sites. I worked hard on my profile. I made sure my pictures weren’t too goofy or unflattering. I tried to paint a picture of being an awesome guy with plenty to offer a prospective lover. I must have not tried hard enough because, despite spending both time and money, I basically got zilch out of it. I probably would’ve been more productive trying to seduce a tree. 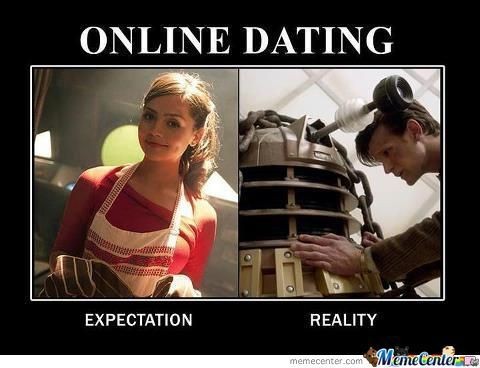 It’s not that the sites themselves failed me. I just think I’m shoveling sand against the tide with online dating. I’m a single male. There are a lot of single males on the internet looking for love and not all of it is of the healthy variety. The disparity between single males and single females on the internet is pretty goddamn staggering. If you’re a woman of average physical attractiveness, online dating is like a candy store. For men, it’s basically akin to fighting over table scraps.

That was my experience. It wasted my time and my money. It also made me feel ugly, unattractive, and unloved. It was not a pleasant experience. That said, it’s not like what I’m doing now is working any better. I need to do something different if I’m going to find a lover.

So with a healthy bit of skepticism and an unhealthy bit of frustration, I’m thinking of giving online dating a try again. I will definitely not use the same sites I did last time. I will try to use another. I will even invest some money into it. There’s no romance without finance, especially if you’re a man like me. It’s not necessarily fair, but that’s the way the world works.

Again, I’m doing this because my options just seem so limited. I’m a young single man and there are just too many of them on this planet right now and not enough women are willing to give them a chance. I need to find a way to be more awesome than all of these men. I don’t know how I’ll accomplish that, but I’d like to give it a try in 2017. Wish me luck.

7 responses to “Online Dating: Should Give It A (Third) Try?”