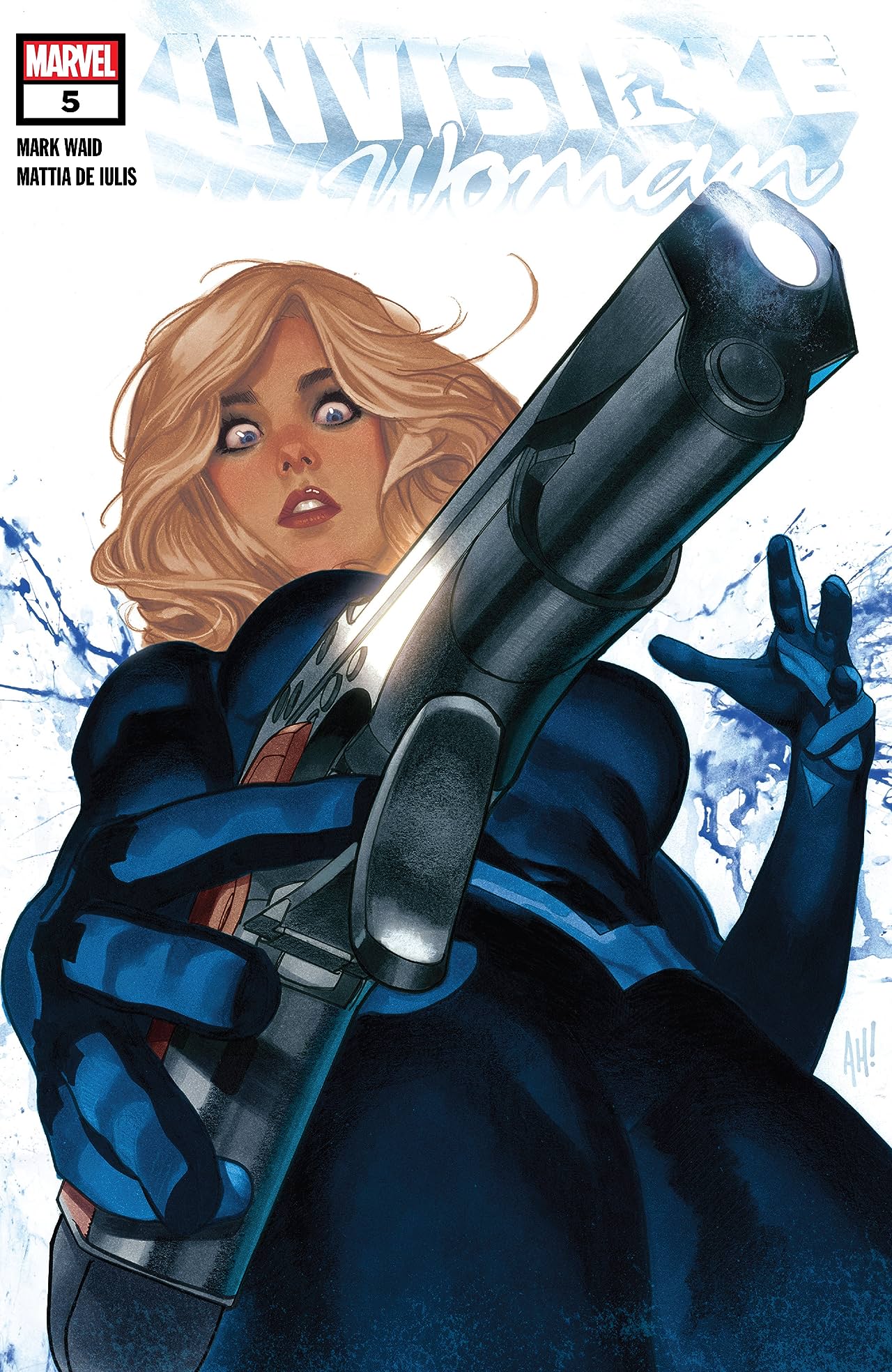 Certain characters are held to very high standards. That’s especially true of superheroes. Not all heroes can or should be judged with the same criteria. Wolverine can go on a rage-fueled killing spree, lust after married women, and drunk a gallon of whiskey a day, but still get labeled a hero. That’s because he’s held to a different, albeit very lenient standard.

That sort of standard just can’t work for a character like Sue Richards. Aside from being a hero, she carries herself very differently from the likes of Wolverine, Tony Stark, and Black Widow. She’s not a career assassin, a playboy billionaire, or some cosmic tyrant. She’s a hero, a role model, a loving wife, and a caring mother. She knows who she is and cherishes that identity.

That same identity has been tested, strained, and pushed in her latest solo series, courtesy of writer Mark Waid. We’ve seen her revisit an old part of her life that almost took her down a very different path, one that would not have met those lofty standards ascribed to heroes like her and teams like the Fantastic Four. In “Invisible Woman #5,” she comes dangerously close to crossing lines she swore to never cross.

It’s the end of a story that has taken Sue Richards away from her family and her life of wild cosmic adventures. Instead of battling planet-eating cosmic beings, she navigates the shady world of espionage. By the end, it’s easy to see why she prefers battling Galactus. 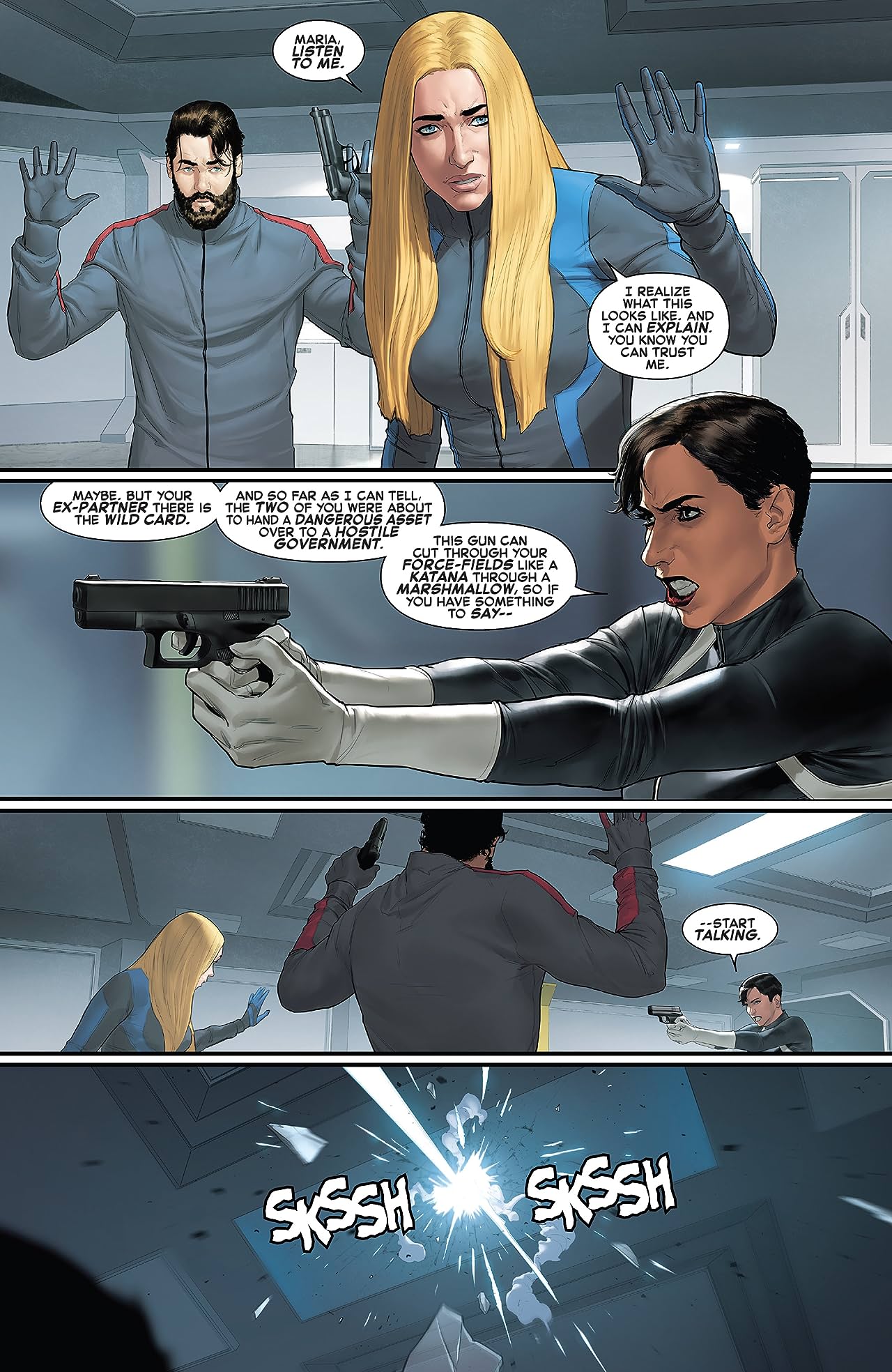 At first, the mission was simple. Sue set out to find a former friend and partner, Aidan Tintreach. As is often the case in stories involving spies, espionage, and beautiful women, it gets exceedingly complicated very fast. Along the way, Waid explores just how capable Sue is on her own. She’s one of those characters who is often defined by her team and her family. She rarely gets a chance to show what she can do by herself.

As a spy, Aidan saw that potential in her. Throughout the series, he has forced her to realize it in ways that don’t always sit well. Initially, it was as an ally and someone in need of her help. The events leading up to “Invisible Woman #5” steadily revealed the kind of person he became. He now has Sue in a position to become that same person.

True to the high heroic standards that she holds for herself, Sue never stops trying to save her former partner. She keeps trying to reconnect with the man she once knew. At every turn, however, Aidan keeps shooting holes in their history and her faith in him. It puts Sue in a difficult position in “Invisible Woman #5,” one for which she can’t play by the same rules that help make her an iconic hero. 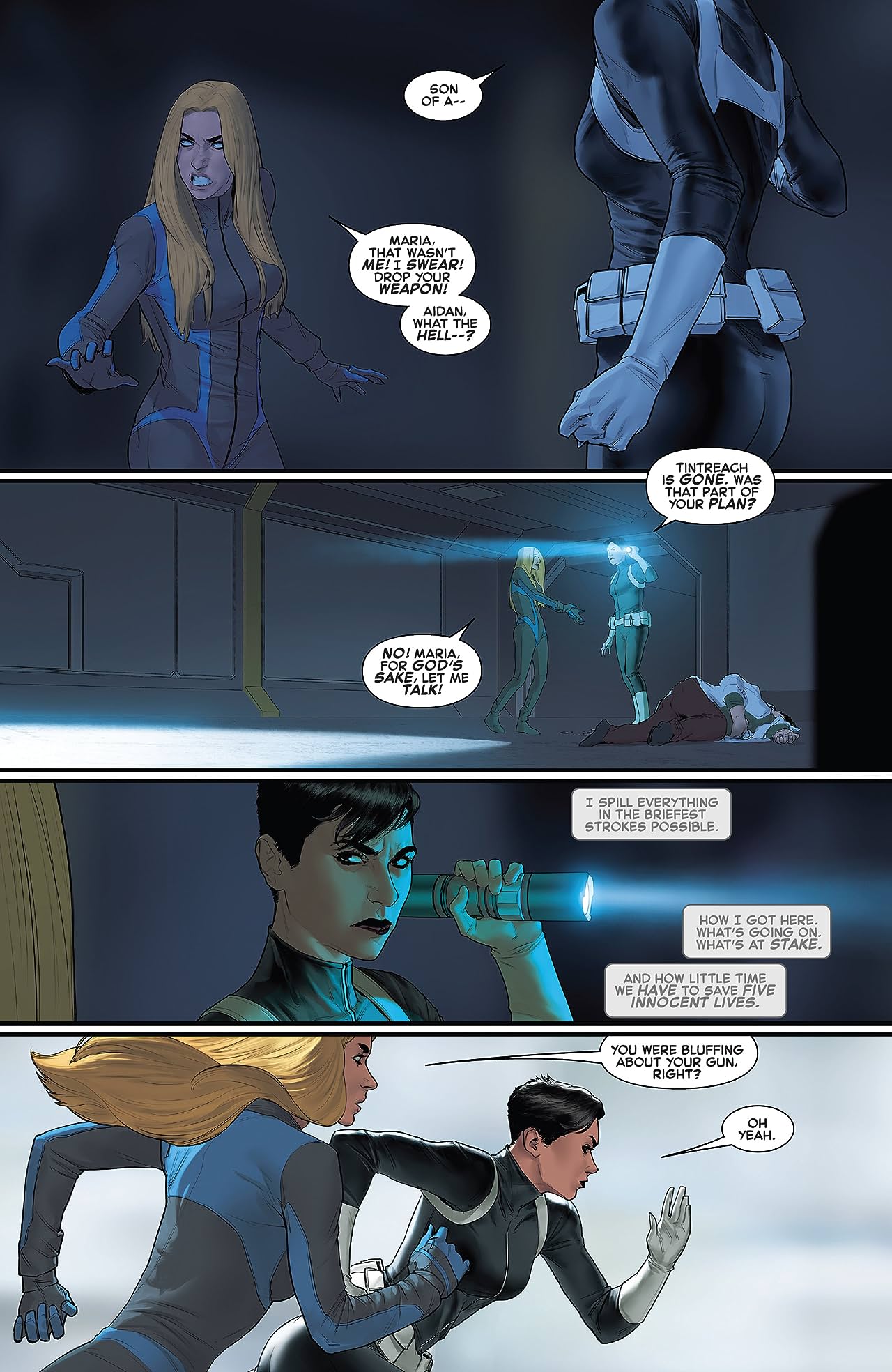 What starts as a rescue is now an unfolding tragedy and it comes dangerously close to becoming much worse. At this point, there’s no more room for betrayals and secrets. Sue has to confront Aidan, who at this point has a death wish. However, rather than poke the Hulk’s eye or kick a puppy in front of the Punisher, he wants Sue to be the one to stop him.

He seems so far gone, but Waid never paints Aidan as someone who has just lost their mind. He’s not the Joker, the Green Goblin, or a villain from a James Bond movie. He’s just someone who has crossed so many lines over the year as a spy, lying and betraying everyone along the way, that there’s no standard left to judge him. As a character and someone who used to ally himself with superheroes, he’s gone morally numb.

At times, Aidan comes off as a dark mirror for Sue. In him, she sees what she could’ve become if she’d remained a spy. He is living proof of what happens when you’re held to a high standard, but cross too many lines. It makes what Sue has to do to stop him feel so dramatic and impactful.

Along the way, she has to push herself and her powers in ways we rarely see outside of trips to the Negative Zone. Artist Mattia de Iulis does an excellent job showing off what Sue can do when she needs to use her powers creatively. The visuals make clear that, even without her family, Sue is very powerful.

Anyone who has read more then one Fantastic Four comic knows that. However, seeing her powers applied in such unique ways helps demonstrate what Aidan sees in her. If she held herself to a different standard, she could be a true force to be reckoned with and not just as a spy. 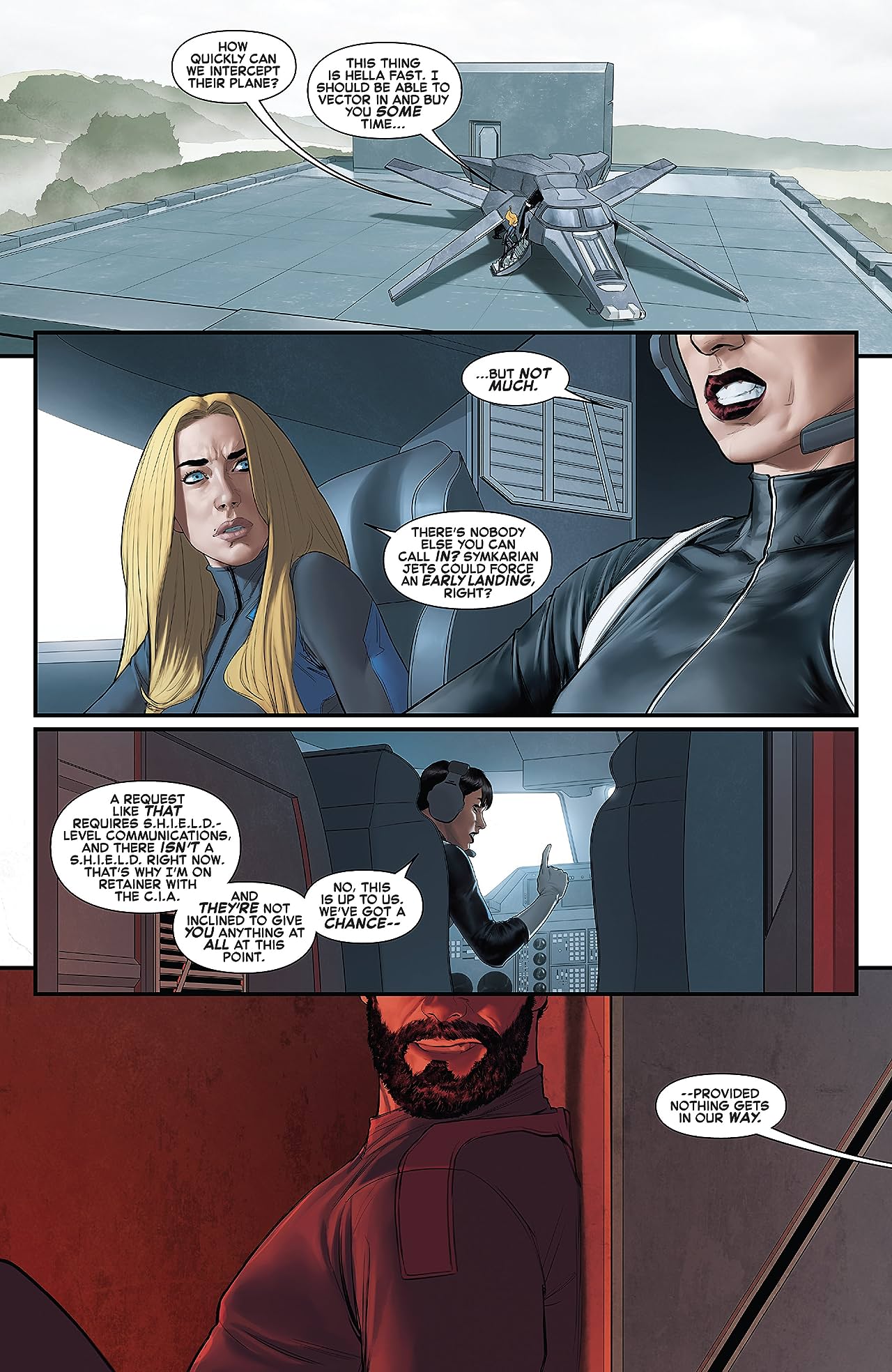 Between de Iulis’ renderings and Waid’s characterization, “Invisible Woman #5” shows the Fantastic Four’s perennial mother figure in a new light. We get to see glimpses of her past before she became this iconic hero that we hold to such lofty standards. We also see how her approach to heroism differs from those who immerse themselves in situations where heroes and villains alike have to lie, cheat, and deceive.

It’s not one of those stories in which Sue can rely on her family, teamwork, or her inherently endearing personality to save the day. She has to face down someone who ventured into the same shady world, but came out far worse. It’s not the kind of situations that Sue often finds herself in with the Fantastic Four, but “Invisible Woman #5” shows that she can handle it, albeit with a heavy heart.

In the end, that same heart is exactly why Sue Richards holds herself to such high standards. It’s the same reason why her heroism is judged by such a strict criteria compared to other characters in the greater Marvel pantheon. When she does have to cross a line, it breaks her heart, as it would for anyone who hasn’t been too hardened by circumstance.

The fact that there are still characters like Sue Richards, who hold onto those values and refuse to cross certain lines, is nothing short of refreshing. In an age where we expect heroes, celebrities, icons, and leaders to cross lines all the time, a hero like Invisible Woman stands out for all the right reasons. 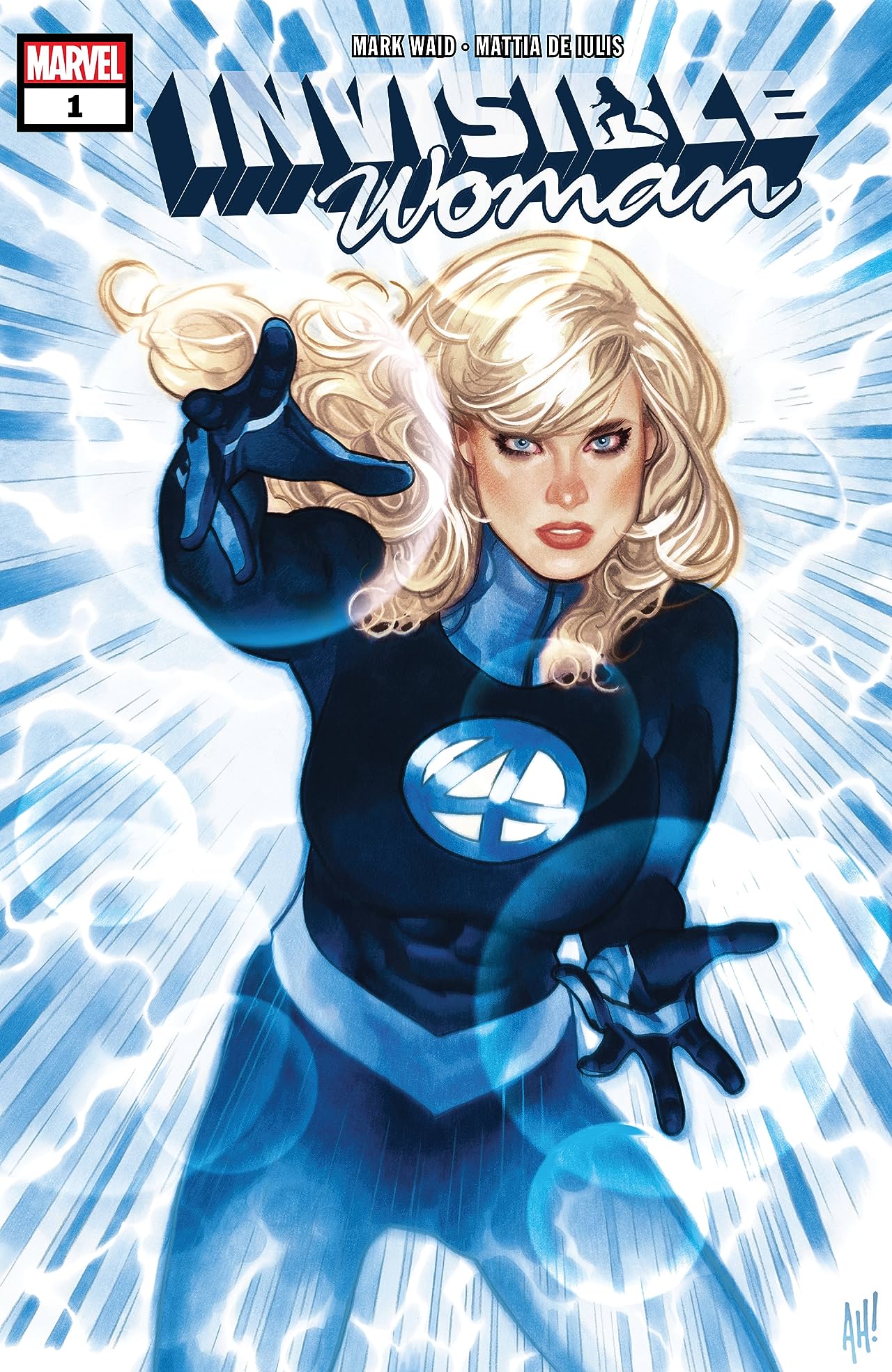 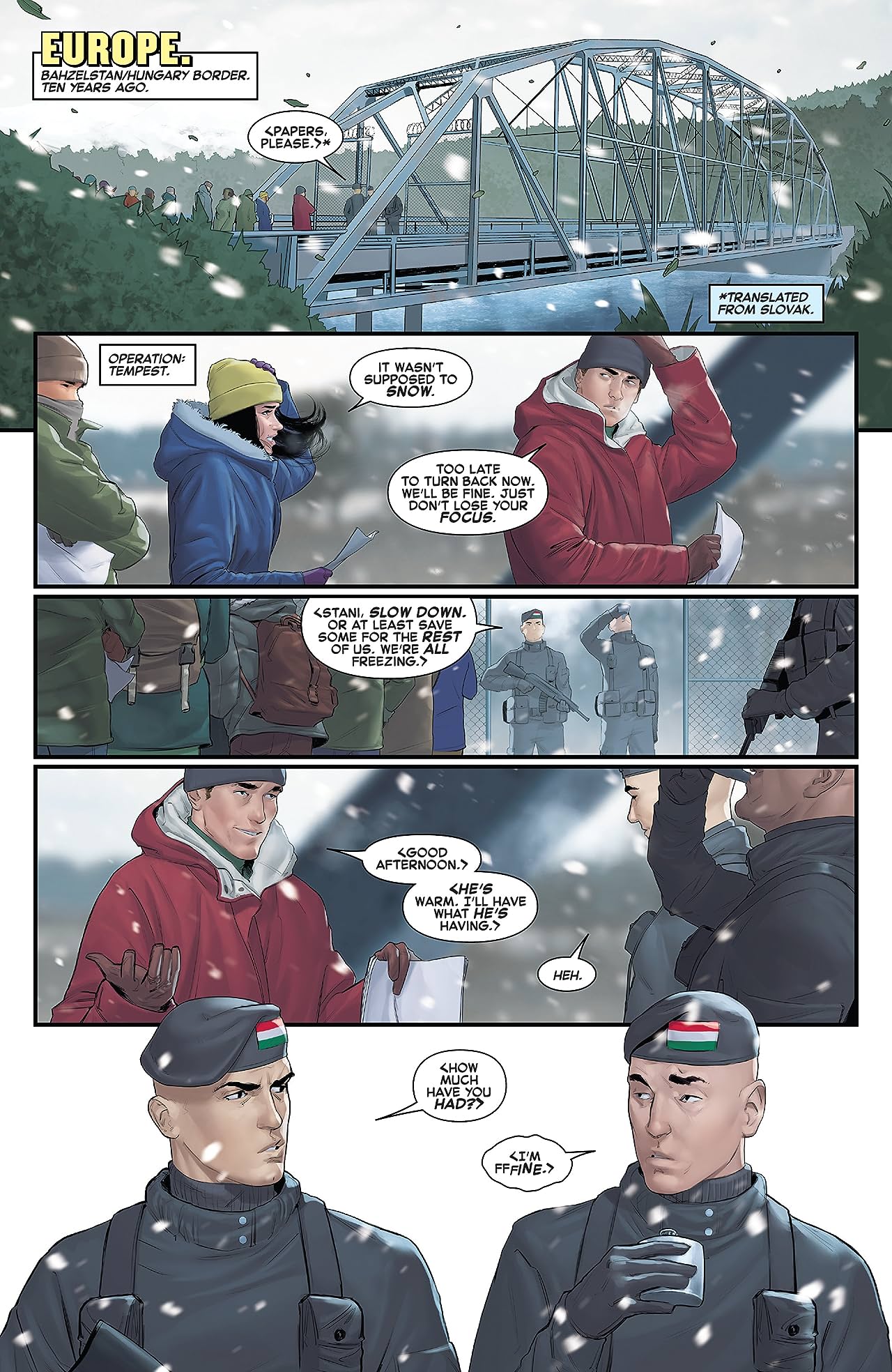 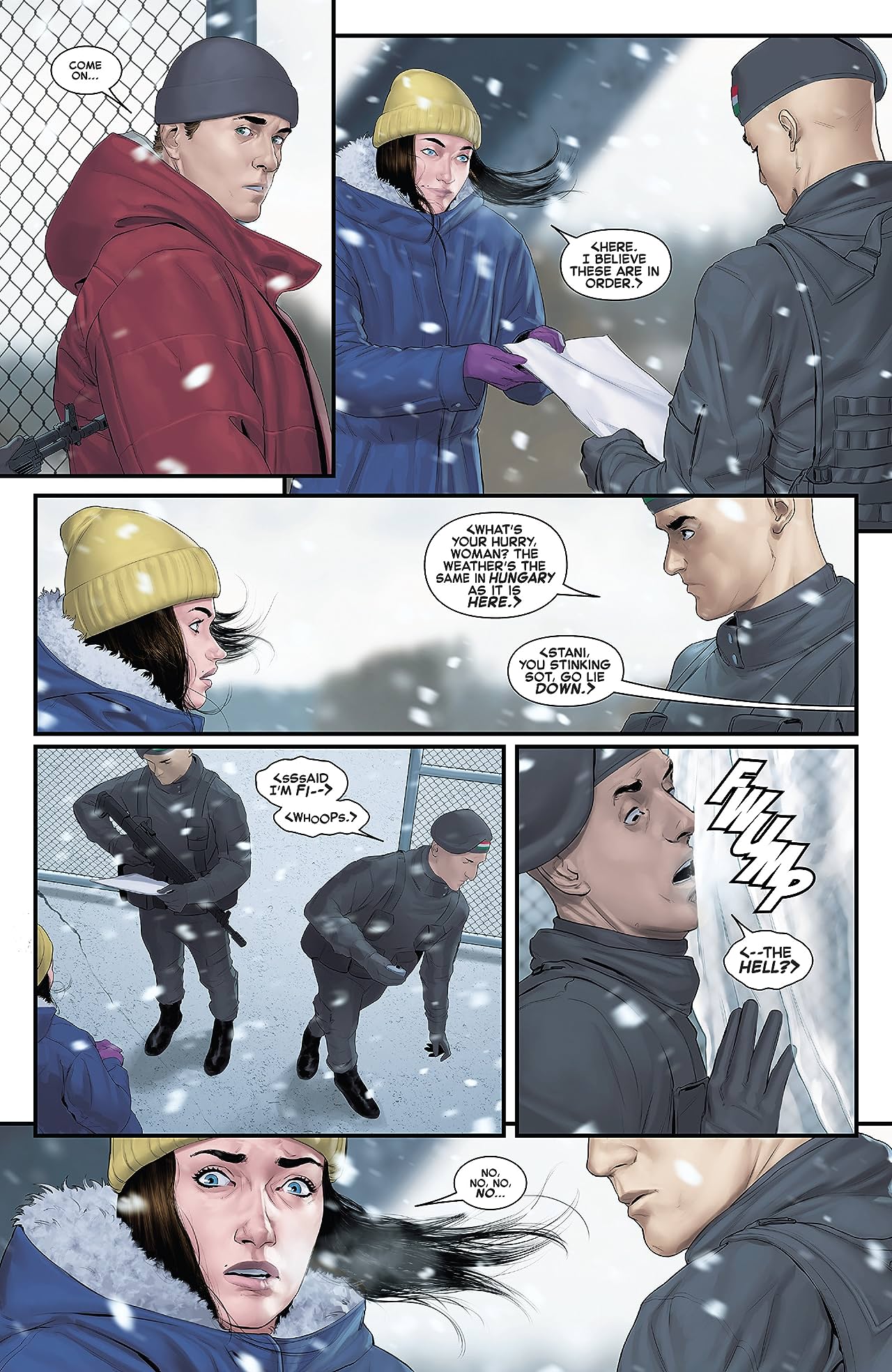 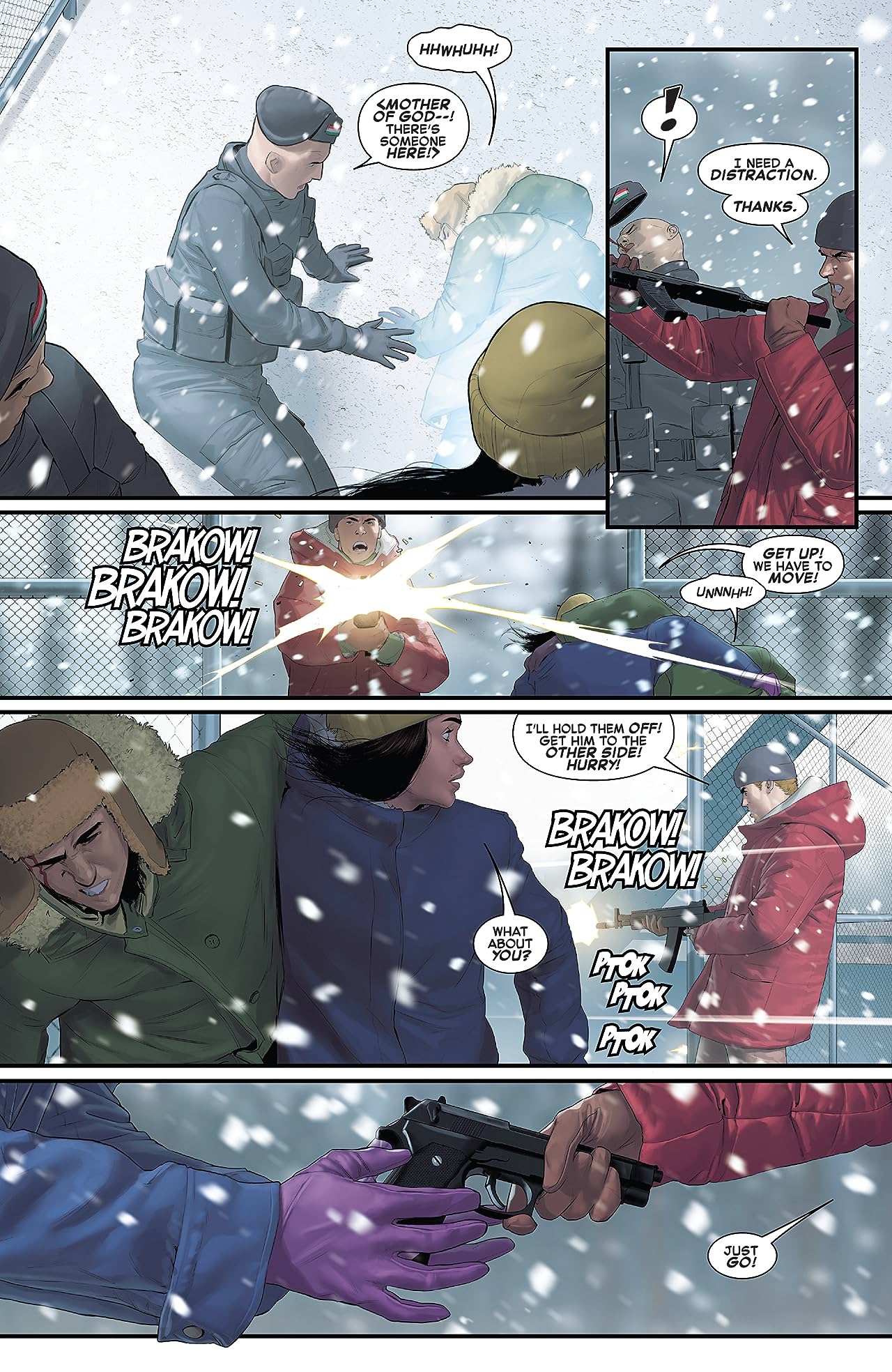