Ten Harsh Truths I’ve Learned In My Life (So Far)

The world is a big, strange, overwhelming place, to say nothing of the universe. We all live in this world for a brief span of time, relative to the age of the planet and of the human species. Within that life, we all learn, grow, and adapt. Some change more than others, but for the most part, we’re not the same person at 50 as we are at 15.

I find that, as I get older, I realize certain truths about life that are somewhat harsh. Some are downright frustrating. It doesn’t matter how you feel about them. That doesn’t make them any less true. You can’t always grasp it when you’re young and inexperienced. Certain things can only become clear with time. You have to live life in this crazy world for a certain number of years before you can truly see the forest from the trees.

I’m not a teenager. I’m not even in my 20s anymore. However, I’m still not what most would consider old. I know I’ll get there one day. I imagine I’ll encounter plenty more harsh truths along the way. Some will hit me harder than others. Some may not hit me until I’m too old to do anything about them. I won’t know for sure until that time comes.

For now, I thought I’d take a moment to share some of these harsh truths. Some of this was inspired by some posts on Reddit in which people share some of those truths, as they’ve come to know them. I don’t agree with all of them, but some do fit nicely with what I’ve experienced.

With that in mind, here are ten harsh truths I’ve learned that I’ve come to realize at this point in my life. Rest assured, I’ve learned much more than ten. These are just the most prominent that I feel are worth sharing.

1. The world owes you nothing. You can’t expect it or anyone in it to accommodate you. You are ultimately responsible for making the most of your opportunities.

2. A lot of success requires a certain amount of dumb luck. Hard work, patience, and persistence certainly are a factor, but meeting the right people and being in the right situation tend to be more decisive.

3. Nobody’s first instinct is to do things the hard way. For the most part, people will always take the path of least resistance when it comes to challenges, change, and hardship.

4. Like it or not, there are people who are just born more talented than you at certain things and there’s nothing you can do about it. No matter how hard you work or apply yourself, you’ll never be as good as them.

5. No matter what sort of relationship you have with your parents, they’ll always affect you in ways you won’t be comfortable with.

6. You will miss on a lot of opportunities that’ll only become clear with hindsight and that’s okay. You need only seize a few to make things worthwhile.

7. Bullies, assholes, and idiots will get away with egregious misdeeds and there’s nothing you can do about it.

8. People are tribal about many things. There’s no way around it. That’s just how we’re wired. Trying to get people to see beyond their tribal affiliations is a losing battle and one that’ll only make people hate you.

9. You cannot change someone’s mind by arguing with them or yelling at them. You can only appeal to them personally and hope they’ll come around. However, not everyone will.

10. At some point in your life, you’re going to believe or buy into something that will make you feel foolish later on.

This post may be a day late, but I feel like it’s one of those posts that needs to be said. It doesn’t just apply to the holidays, the time after the holidays, or the time in between holidays. This could very well apply to any day of the year, but some more than others. Anyone who has had a day where comfort comes in one too many glasses of wine, bottles of beer, or shots of whiskey knows what I’m talking about.

Yes, I’m talking about hangovers. For some people, the mere mention of the word is enough to trigger reflexive dry heaves. Some say hangovers are God’s way of letting us know we’re having too much fun. I think they’re more a harsh reminder that our bodies are woefully imperfect hunks of flesh that can’t always handle our vices.

I’ve certainly experienced the joys of a fun night followed by a painful morning. The worst hangover I ever experienced came after an NFL preseason game of all things. I watched the game with some buffalo wings and a fresh bottle of Jack Daniels. For me, this is perfect football food and I was excited about how the game and the upcoming NFL season.

Unfortunately, the game was kind of crappy. The team I was rooting for really stunk. Naturally, I found myself reaching for the Jack Daniels after each lousy play. Then, like an unplanned one-night-stand, one thing led to another. Before I know it, the entire bottle of Jack Daniels is empty. Yes, I said the entire bottle. 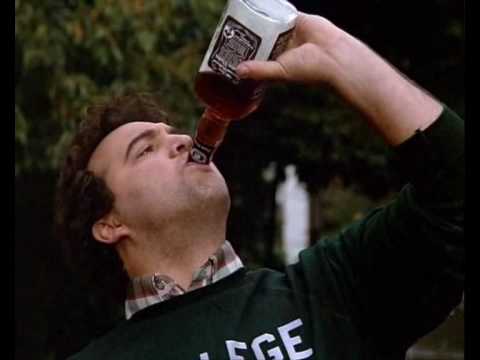 Naturally, I became very drunk. I became so drunk that I could barely stand up and I started dancing to the music on commercials. So while it may have been a lousy game, I still found a way to have fun that night.

The next morning, however, was not so fun. I emerged from a restless sleep feeling like a truck hit me and then an entire team of elite kick-boxers took turns kicking my head. It was bad, to say the least. I threw up at least twice and didn’t leave my bedroom until 4:00 p.m. the next day. I don’t know if it could’ve been worse, but it was pretty damn bad.

So, with that painful experience in mind, I’d like to share some hangover remedies. Now make no mistake. There is no miracle cure for a hangover. You can’t just down a bottle of whiskey and expect to be all upbeat and chipper the next morning. Hangovers are a product of biology, chemistry, and sub-par human physiology. As anyone who went through abstinence only education knows, you can’t fight biology.

You can still make things easier for yourself. There are ways to at least ease the symptoms so you don’t feel like you lost a cage match with an angry gorilla. With help from the fine folks at WebMD, here are some of the ways you can ease your hangover agony:

Again, none of these are miracle cures. You may still feel like shit, even if you do everything on this list and try a few folk remedies from your crazy uncle. At some point, the agonizing process of a hangover has to run its course. Like teenage hormones, you can’t fight it. You just have to endure it.

I hope this helps everybody get through some rough days in 2017. If you want some more less proven remedies, check out this video from WatchMojo. I want to help people with this blog. Alleviating a hangover may not seem like much, but once you experience one, you’ll appreciate the sentiment.