How And Why “No Strings Attached” Became My Favorite Romance Movie

A few years back, I cited “Crazy/Beautiful,” an underrated cinematic gem from 2001, as my favorite romance movie. That movie, which I feel has aged better than similar movies from previous decades, has a special place in my heart and it always will. It was the first romance movie that I genuinely enjoyed as both a movie and a love story.

However, I’m here to announce that my ranking has recently changed. I still love “Crazy/Beautiful,” but it is no longer my favorite romance movie. That rank now belongs to “No Strings Attached,” the sexy romantic comedy from 2011 starring Ashton Kutcher and future Thor, Natalie Portman. As of this moment, it’s a rank that will be very difficult for any future movie to top.

The premise of “No Strings Attached” and how it became my favorite romance movie is a remarkable story, in and of itself. This is one of those movies I didn’t expect to be so impactful. I ignored it when it initially came out in theaters. The premise sounded generic and it didn’t help that a similar (and inferior) movie called “Friends With Benefits” came out at the same time.

This is even less romantic than it looks.

It’s a common romance trope. Two people decide to eschew traditional dating methods and just stick to sex. They don’t want anything serious. They just want steady, enjoyable sex, minus the complications that relationships bring. It starts off fun and sexy. Then, things get serious when emotion and jealousy enter the picture. Eventually, both characters realize they love each other and that’s the end of that.

It’s not an overly elaborate premise for a love story. I’ve written more than my share of those as an aspiring erotica/romance writer. It can be a great love story when done right. The problem is it’s rarely done right. It’s also painfully predictable. It’s next to impossible to evoke decent drama when the conflicts and resolutions are so obvious. That was what made “Friends With Benefits.”

That was also why it I didn’t bother seeing “No Strings Attached” for years. I thought it seemed too generic. Then, on a whim, I decided to check it out on Hulu. I fully expected to turn it off halfway through once the plot settled into familiar patterns. I freely admit I was dead wrong. I pre-judged this movie and that was a mistake on my part.

By the time the credits rolled, I was smiling from ear-to-ear and shaking my head in disbelief. This movie did something I didn’t expect it to do. I didn’t even think it was possible, given the sheer volume of romance I’ve written and consumed. It struck all the emotional chords it needed to and then some. Most romance movies these days are lucky if they can strike just a few.

To appreciate this, you can’t just look at the movie through its general plot summary. At its core, “No Strings Attached” follows the basic script of two people agreeing to casual sex in lieu of a formal relationship. However, what makes this movie stand out is how it navigates this premise through its two main characters, Emma Kurtzman and Adam Franklin.

Before these two characters ever start having sex, the movie takes time to establish who they are and why they decide to seek such an arrangement. Adam and Emma aren’t just a couple of attractive strangers who cross paths and decide they like casual sex. They’ve actually known each other for years, albeit informally.

The first 10 minutes of the movie are dedicated to showing that they both end up in such a frustrating place in their personal lives. Adam just broke up with his girlfriend, Vanessa. Then, his father, a former TV star, decides to start dating her. Naturally, that leaves him pretty messed up.

Emma’s situation is not much better. Before they reconnect, her father dies and she doesn’t demonstrate the greatest coping skills. Later on, her sister, Katie, is getting married and her coping skills still haven’t improved. Neither she nor Adam are complete wrecks, but they’re trying to navigate difficult personal matters and failing miserably.

These issues have nothing to do with romance, sex, or loneliness. They’re legitimate, relatable issues that real people deal with, even if they’re not as attractive as Ashton Kutcher and Natalie Portman. That makes their problems and their need for comfort feel genuine. It also makes their pursuit of a more casual, less complicated relationship more understandable. 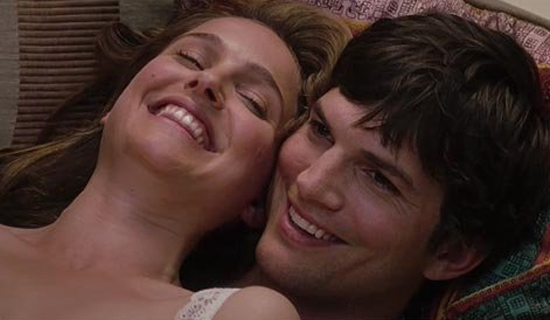 This is where both the story and the romantic chemistry in “No Strings Attached” gains its endearing appeal. It helps that it’s a very sexy appeal, as well, but that’s only ever secondary, at most. As Adam and Emma pursue their new arrangement, we see that it’s not just fun and sexy. It’s genuinely good for them.

Being together in this unique arrangement helps them in many ways. They’re better able to navigate the other issues in their lives. Some of those issues have to do with work. Adam is trying to make it as a writer on a TV show while Emma is trying to further her career as a doctor. Others are on a more personal front with Adam’s dad being a heavy source of drama.

Whatever the issues, the relationship helps Emma and Adam in ways that are subtle, but noticeable. Being together, even if it isn’t romantic, is genuinely good for them. Even when new stresses enter the picture, they help each other get through it. They get to a point where you can’t help but root for them, both as individuals and as a couple.

That journey to something more serious than casual lovers does happen, but it’s chaotic. Considering how predictable stories about casual lovers tend to be, this is one of the most refreshing parts of “No Strings Attached.” It doesn’t happen all at once. There are even some major setbacks along the way. However, there’s a clear and logical progression with Adam and Emma’s romantic journey.

They start out as casual acquaintances.

Then, they start enjoying each other’s company.

Then, they become friends.

Then, they become lovers.

Then, they start to legitimately care about one another.

Then, they start to develop deeper feelings for one another.

Then, they confront those feelings together.

Finally, they fall in love.

Again, it’s not a smooth transition. There are moments in which the extent of their romantic connection is unclear. What Adam and Emma want from one another seems to fluctuate, which makes them feel very human. While it never comes off as entirely one-sided, it never feels like a bland love story in the mold of a fairy tale.

In addition, “No Strings Attached” also avoids the common trap of making sex seem like this huge complication for real romance. In many other love stories of this nature, sex is often framed as this make-or-break act for a couple. Either having sex destroys the romance or it makes the romance inevitable. It gives the impression that you can’t have sex without falling in love.

Beyond reinforcing harmful notions espoused by repressive purity culture, it undercuts the substance of the romance. It implies that it’s contingent on sex in order to blossom. The romance and the sex in “No Strings Attached” is portrayed with more complexity. One never depends on the other, but they do plenty to complement each other.

Ultimately, great sex isn’t the reason Emma and Adam start to fall in love with one another. It acts more as a catalyst. By being together, they’re not just happier and more sexually satisfied. They become better at navigating the various quirks of their respective lives. That’s basically the epitome of a healthy romance.

More than anything else, the end of the movie clearly establishes that these two people want to be together. Their love is not something they can’t avoid or escape. It’s not bound by destiny and ordained by higher forces. Emma and Adam get together because they choose to.

The love they find is not some burden that provokes jealousy or loneliness. They end up together because they want to be together. Their love works because it’s real, sincere, and genuine. This is what makes the final few minutes of the movie the most cathartic I’ve ever experienced in a romance movie. It was those final minutes that sealed “No Strings Attached” as my new favorite romance movie.

There are many other elements of this movie that I could praise for hours on end. I could probably write an entire book on why this movie worked so much better than “Friends With Benefits.” I’ll save that discussion for another time. For now, I encourage anyone out there with a taste for romance to check this movie out. Give it a chance, like I did. Let me know if it had a similar impact.

I don’t doubt more romance movies will come along and challenge “No Strings Attached” for the title of my favorite. I watch more romance movies than most straight men and it may only be a matter of time before another movie comes along that exceeds both this and “Crazy/Beautiful.” I honestly look forward to that day, but “No Strings Attached” sets the bar pretty damn high.

Filed under movies, romance, sex in media, sex in society