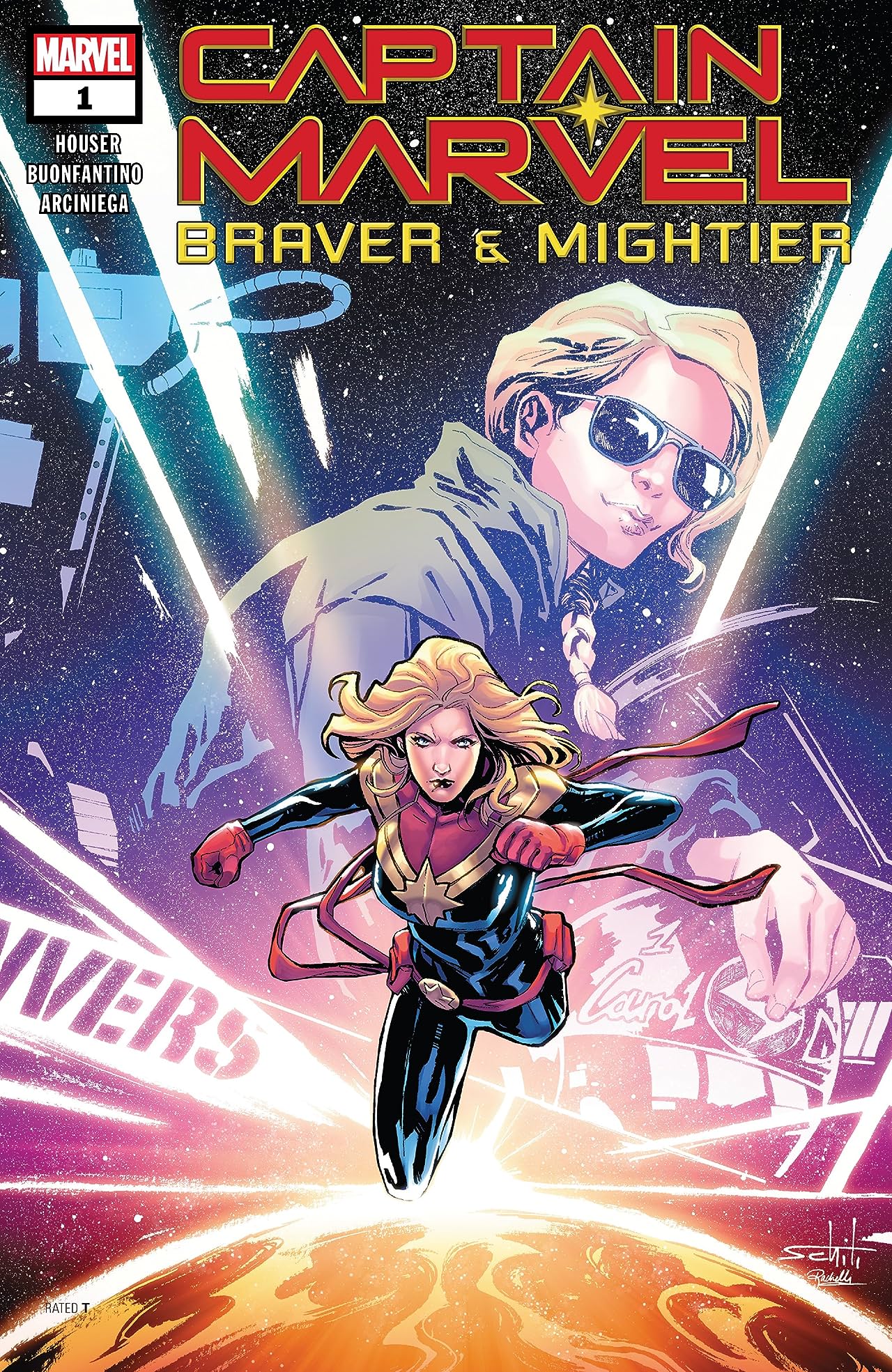 Every week, a new collection of comics enters this world and makes it a just little more bearable. In these times of internet trolls, political divide, and terrible movie remakes, few things are as relaxing and rewarding as enjoying a good comic on a Wednesday morning. Once again, I’m here to single out one particular comic that helps make a good morning turn into a great day.

This week, along with a sizable chunk of 2019 thus far, is another great week to be a fan of all things Carol “Captain Marvel” Danvers. With her big debut movie coming out in just over a week, she’s about to achieve a rare status among comic book superheroes. That makes a comic like “Captain Marvel: Braver and Mightier #1” that much more special.

This comic isn’t actually part of Captain Marvel’s other ongoing series by Kelly Thompson, which I also highly recommend. This comic is a simple one-shot with a simple story that, in 23 short pages, highlights why Captain Marvel is a character deserving of the superhero A-list. 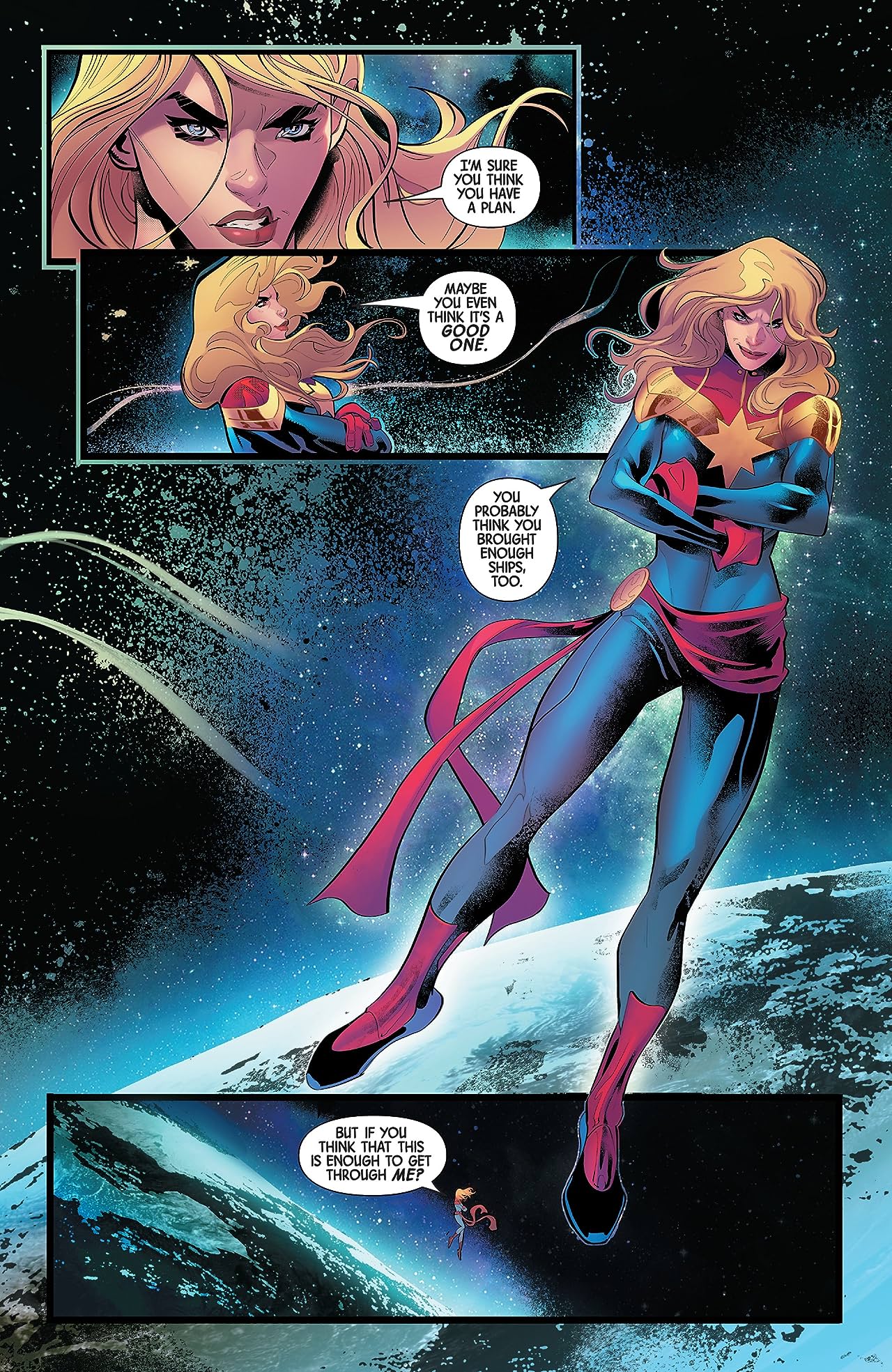 Writer, Jody Houser, puts Carol in a fairly simple setting. A fleet of mysterious aliens are threatening to invade Earth. It’s the sort of thing that happens at least once a week in the Marvel universe. It happens so often that it really doesn’t warrant assembling the Avengers. This sort of thing is right up Carol’s alley.

While this is going on, another smaller story unfolds back on Earth. At the Air and Space Museum back on the ground, Carol is being honored with her own little day of celebration. Having come from the United States Air Force and from NASA, it makes perfect sense that they would single her out as their preferred hero. Captain America already has the 4th of July and Tony Stark has a big enough ego. 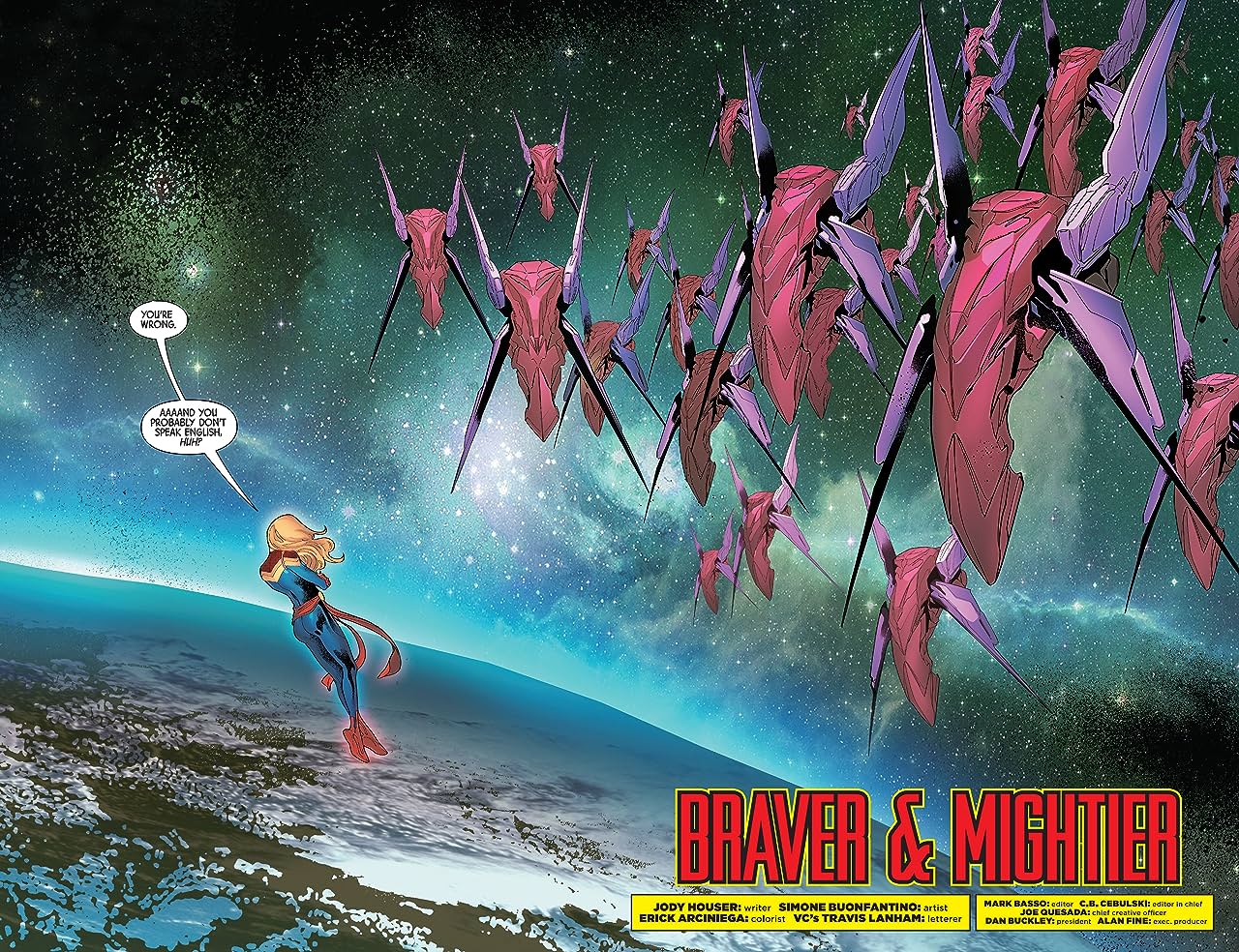 As part of this celebration, some people in the press are looking for a chance to interview her. Among that press pool are a couple of local high school students who only got to attend because they’re local. They’re not exactly professional reports. They even admit that. However, they still have a chance to talk to Captain Marvel and they want to make the most of it.

They won’t get to ask her many questions. In fact, they need to figure out just one. All the while, they find out along with the rest of the world that Captain Marvel is fighting aliens on the same day when she’s supposed to be celebrated. It feels exactly like the sort of thing she would do, but these two plots complement each other in a way that really works in the end.

Without spoiling too much, Ms. Houser uses “Captain Marvel: Braver and Mightier #1” to demonstrate an issue that affects Captain Marvel more than most superheroes. As someone who is part human and part alien, she is often torn between worlds. Her desire to fly higher, further, and faster isn’t just about ambition. It reflects how her alien side often clashes with her human side. Throughout her history, especially since she took the title of Captain Marvel in 2012, she often finds herself divided between confronting alien threats in Marvel’s vast cosmic landscape and defending the Earth with her fellow Avengers. As a result, it’s sometimes hard for her to relate to the people on Earth, as well as the aliens not trying to kill her.

Being able to relate to the people they’re saving is an important component for any hero, regardless of their origins or heritage. Superman is an alien and Wonder Woman is a demigod, but they still have strong connections to the world they protect. “Captain Marvel: Braver and Mightier #1” helps remind Carol of that connection.

In the end, Ms. Houser’s story and Simone Buonfantino’s artwork work together perfectly to demonstrate how far Carol Danvers has come and how much further she is poised to soar. It acknowledges the challenges she faced in the past and even noted some of her failures. However, Carol takes the good with the bad. That’s not just the mindset of a good superhero. That’s the mentality of a mature, understanding person.

The simplicity and humanity of “Captain Marvel: Braver and Mightier #1” makes it an excellent entry point for those curious about Captain Marvel beyond her upcoming movie. Again, it’s not too dense in terms of plot, but doesn’t need to be in order to work. It’s a good time to be a fan of all things Carol Danvers and this comic can only make those good times even greater.