The Forbidden Fruit Factor: How Taboo Skews Our Sexuality

If I were to walk up to you and say, “Don’t kick elephants!” what would be the first thing that pops into your mind? For one, you’d probably be wondering what sort of head trauma I had suffered as a child to issue such a warning. Then, you’d probably think about kicking elephants.

This isn’t just the musings of someone who may have gotten hit in the head with one too many baseballs as a kid because he sucked at little league. This is a mental exercise that author/reporter/TV personality John Stossel uses in his book, “Myths, Lies, and Downright Stupidity.” It’s as colorful a read as it sounds.

Most of us in Western traditions know what we’re referring to when we talk about “forbidden fruit.” It comes right out of the bible, symbolizing something tempting that some higher authority have told us to avoid. In the bible, it’s an apple. In real life, it can be damn near anything.

For some people, that fruit is chocolate. For others, it’s alcohol, heroin, or cocaine. It doesn’t even have to be drugs. There have been higher authorities warning people about dungeons and dragons, comic books, and  Pokémon. Some of these fruits are legitimate health concerns, especially with drugs. Others, such as those who whine about Pokémon, are just plain stupid.

For the purposes of this discussion, though, the forbidden fruit effect is applied to something that impacts everybody. Yes, I’m talking about sex. Let’s face it, none of us would be alive if it weren’t for sex. That makes it a slightly more important fruit than Pokémon.

There are a lot of forbidden fruit aspects surrounding sex, erotica, and romance. There are so many, in fact, that I’ll probably have to do multiple posts about it to really explore the breadth of this issue. For now, I’d like to keep things general because this is something that I’m exploring for a reason. I am actively developing a new novel that uses the forbidden fruit effect in an extreme (hopefully sexy) way. Consider this a prelude of sorts.

That fruit pertains to female sexuality. It’s not sex in general. It’s specifically female sexuality that takes on the aura of forbidden fruit. For proof of just how much it affects us, look no further than Carl’s Jr. ads like this. 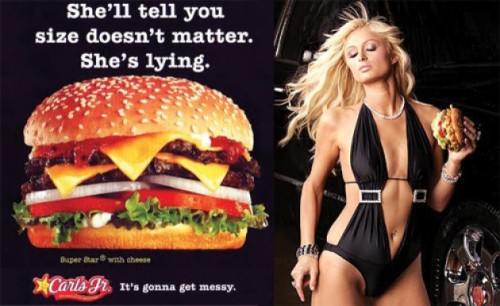 Show an ad like this to an audience where female sexuality is taboo and it’s easy to imagine the reactions. Such an audience sees this and thinks, “Oh my God! Look! It’s a sexy female! A beautiful sexy female! It’s so wrong! So immoral/sinful! It’s making me think impure thoughts! Help me!”

I admit, that’s an exaggeration. It still illustrates the impact that forbidden fruit has on our minds. It doesn’t even always come from a strictly moral stand either. There are people on the other side of the socio-political spectrum that see that ad and think, “Oh my heavens! There’s a sexy female! It’s so wrong! It’s so blatantly sexist/misogynistic! This is an affront to women everywhere and it must be destroyed!”

Yes, that’s another exaggerated reaction. It illustrates the same effect. If a man were in that ad, it may raise a few eyebrows, but it won’t generate full-blown distress. It highlights just how much that we, as a civilization, have skewed female sexuality.

Well, the Richard Dawkins’ of the world would love to blame religion entirely and granted, religion does play a huge part in fetishizing this basic component of human sexuality. The bible spends a great deal of time and effort making women and the desire to be with them taboo. The Quran continues this tradition and even takes it to greater extremes. However, it is not the sole culprit.

Culture, primarily those built around economic models that require large farms where large families are needed to grow crops, are also major culprits. I’ve discussed it before. When there’s an economic incentive to make sure women have a lot of babies and men have incentive to make sure those babies are his, then society will find every possible excuse, crazy or otherwise, to manage female sexuality accordingly.

As a result of these forces, female sexuality isn’t just a forbidden fruit. It’s basically the ultimate prize for men, a Super Bowl trophy on top of a pile of gold-plated elephant’s tusks. For women, it’s this inherent shame that they must carry and be anxious of every moment of every day. For both genders, it’s pretty damn stressful.

Naturally, it’s going to screw with our minds. Sex isn’t like chocolate, video games, or Pokémon. It’s a hard-wired basic drive. Nature programs every living thing to survive and reproduce. It doesn’t program us to survive, reproduce, and level up our Pokémon. It’s one thing to stop playing Pokémon. It’s quite another to subvert basic human drives.

This is born out in research. Some call it, “The Paradox of Temptation.” When you establish that something is just another option, then your brain tends to assess them on equal footing, which is what it’s supposed to do. That’s a survival mechanism. We need that.

However, when you establish that something is a forbidden option, then the wiring of your brain gets a little clunky. That caveman logic in our brains comes back to haunt us again. It follows the skewed logic that if this is forbidden, then it must be valuable and if it’s valuable, then it must be sought.

These results have even been born out by studies about cigarette smoking by the National Institute of Drug Abuse in 2010. When you loudly proclaim that something is forbidden and wrong, it gets peoples attention and sparks curiosity, which is basically the goal of every annoying advertisement ever made.

It also plays out in our interest and desire towards sex. Utah is famous for being a religiously conservative state run by Mormon, another religious sect that places a high emphasis on sexual morality. By sexual morality, they mean women should not have sex for any other reason than to make more Mormon babies that will grow into more Mormons who will give the Mormon church more money.

Why does awareness matter? Well, remember this famous speech by Alec Baldwin?

Ignore the premium-level assholery for a moment and look at the sale strategy called AIDA (Attention, Interest, Decision, Action). What’s the first part of that strategy? It’s simply getting the customers attention. You could argue it’s the most important step because the other three steps can’t happen without the first.

By making something taboo and forbidden, you immediately give it some extra attention. Just like when John Stossel says, “Don’t kick elephants!” you end up drawing more attention to it than it would if it were just another mundane choice.

Apply that to sex and we’re bound to skew, disrupt, or undermine our attitudes towards sex in a multitude of ways. We’ve created a set of assumptions and morals in our culture that say female sexuality is forbidden and should not be expressed in ways that a Mormon priest wouldn’t approve of. As a result, we give a lot of attention to female sexuality because we’ve convinced our caveman brains it’s somehow more precious than other forms of sexuality.

When you take into account the gold rushes, tulip manias, and black Friday sales after Thanksgiving, it’s easy to see how excessive attention and skewed value can mess with our heads. It affects how we structure our relationships, how we seek love, and how we deal with our lovers.

It’s one thing to forbid something that’s genuinely harmful, like heroin and meth. It’s quite another to forbid basic sexual expressions that are an intrinsic part of our nature. It’s a concept I’m exploring for a future novel.

I don’t want to reveal too much at the moment because my plans for this book are tentative, but expect it to be a story that confronts forbidden sexual expressions in the most direct way possible. It’ll be direct, but it’ll also be sexy as hell and just as entertaining. I’ll post more details as the story develops.

Until then, think about all the sexual taboos in our world. Look at them closely. Try to filter out the flaws in our caveman logic. Should these forbidden fruits really be so forbidden? It’s a question worth asking.

6 responses to “The Forbidden Fruit Factor: How Taboo Skews Our Sexuality”