Heroes, Villains, And The Forgotten (But Relevant) Message Of “Megamind”

Every now and then, a movie comes along that was unremarkable in its time, but gained greater meaning years later. It’s one of those unspoken challenges of movie making that doesn’t involve dealing with difficult actors. Sometimes, a movie is either ahead of its time or too late to make much of an impact. Like cooking the perfect steak or good fart joke, timing is everything.

That brings me to “Megamind,” a very well-done, but often overlooked animated movie from Dreamworks. Since it’s not Pixar and doesn’t involve “Shrek,” it had a lot working against it before it came out. However, it also had plenty more going for it and not just in terms of quality 3D animation at a time when “Avatar” finally made that gimmick viable.

The movie boasted an amazing voice cast that included Brad Pitt, Will Ferrell, Jonah Hill, Tina Fey, and David Cross. It also did plenty to leverage that star power. Will Ferrell even famously dressed up as the titular character at the San Diego Comic Con to promote the movie. I’m not saying that, alone, would’ve made that movie a success, but Will Ferrell is one of those rare talents who can make anything more appealing.

You can’t argue with THAT kind of appeal.

In addition, the movie told a compelling story in a way that was concise, enjoyable, and appealing for adults and children alike. It showed in the favorable reviews it received from critics and the high scores it earned from audiences. Unfortunately, it didn’t quite show in the box office totals. The movie did well, but it fell short of the high bar that both Pixar and “Shrek” have set for animated features.

The reason for the movie’s shortcomings are numerous and varied. It came out in 2010, just in time for titles like “Toy Story 3,” “How To Train Your Dragon,” and “Tangled” to steal the show. It also came out at a time when superhero movies were just starting to ascend. “Iron Man” had just come out and the scars from “X-men Origins: Wolverine” were finally starting to heal.

However, “Megamind” really jumped the gun in terms of timing. We were still a few years before “The Avengers” cemented superhero movies as ultimate box office gold encased in vibranium. As a result, the remarkable concept that “Megamind” introduced went forgotten, but I believe it’s worth remembering.

The plot of “Megamind” is simple on paper, but complex in its implications. It tells the story of a self-proclaimed super-villain named Megamind, who was voiced by Will Ferrell. His persona is essentially a comedic parody of every super-villain trope that ever existed. He’s a mad genius bent on conquest and domination, but is constantly thwarted by an overly-powerful, overly-handsome hero.

That hero, appropriately voiced by Brad Pitt, is Metro Man. Like Megamind, he’s also a parody of every superhero trope. He’s part Superman and part Captain America, grossly overpowered and so morally pure that it’s laughable. As such, the movie never attempts to frame Metro Man’s heroism or Megamind’s villainy in a serious sort of way.

That approach is key because the way the story plays out essentially flips the script on the standard narrative surrounding superheroes, super-villains, and what motivates both of them. It conveys a message that didn’t really have much impact in 2010, but if it came out just five years later, its themes would’ve been much more relevant.

At its core, “Megamind” asks what would happen if an over-the-top villain like Megamind actually defeated an over-the-top hero like Metro Man. How would he react? How would the society around them react? These are questions that often have simple answers in other superhero movies. “Megamind” dares to add an extra layer of complexity.

Early on in the movie, Megamind achieves what Lex Luthor, Dr. Doom, and every other mustache-twirling villain failed to achieve. He defeats his heroic nemesis. He takes over the city he seeks to rule. There is no longer anyone or anything to stand in his way. He is, for all intents and purposes, the most powerful being in Metro City.

That’s not the end of the story, though. That’s just the beginning. Shortly after this achievement, which caught Megamind himself by surprise, he has an existential crisis of sorts. Suddenly, there are no more plots left to hatch. There are no more battles left to fight. He has everything he ever wanted, but it still leaves him feeling empty inside.

It leads him on a path that reveals some unexpected insights into the whole hero/villain dynamic. At first, Megamind doesn’t know how to handle his new situation. It’s so unfamiliar and so jarring that it causes serious distress. Even for a super-genius, sudden change and unfamiliarity can be very difficult to handle.

Megamind’s first instinct, which is usually the same instinct most ordinary people act on in such distressed states, is to return to something familiar. He attempts to recreate the status quo as he knew it, which led him to create a new hero in Titan, who is voiced by Jonah Hill. He says outright that without a hero to fight, he has no purpose. Since he happens to be a super-genius, he just decides to create one.

In doing so, he learns as well as everyone else in Metro City that creating a hero is not as easy as just giving someone heroic abilities. On top of that, he also learns that it’s not always possible to go back to that comfortable status quo. In fact, attempting to do so could only make things worse.

Without giving away the entire movie, which I encourage everyone to see, “Megamind” presents some pretty insights into what it means to be a hero and a villain. At a time when more complex villains like Walter White and Erik Killmonger are gaining greater appeal, I believe these insights are more critical now than they were in 2010.

A great deal of what drove Megamind early on was his assumption that he’s the villain and Metro Man is the hero. As such, they’re destined to fight each other with the hero always triumphing. He never stops to question that assumption, nor does he contemplate his goals for after he succeeds. It’s not until he actually succeeds that he realizes how flawed those assumptions were.

Metro Man realizes that even sooner. In one of the main twists of the story, “Megamind” shows that even idealized heroes aren’t immune to this inescapable dynamic. Like Megamind, Metro Man does what he does because he assumes that’s his role. He doesn’t question it until it becomes untenable.

By breaking that classic hero/villain dynamic, both Metro Man and Megamind reveal that the nature of the struggle between a superhero and a super-villain is often incomplete. They may think they know what they want. Heroes want to save the day. Villains want to conquer and rule. Beyond that, though, there’s no other vision. It’s just an endlessly repeating cycle that eventually goes nowhere in the long run. 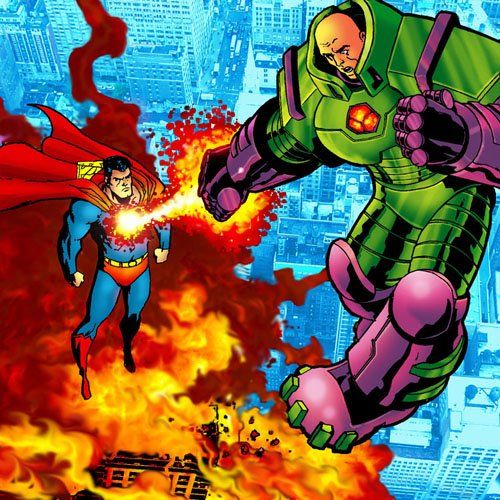 In a sense, the entire story of “Megamind” is a reflection of the paradox of superheroes. Heroes may save the day and defeat the villains at every turn, but they never go beyond that struggle. They never attempt to change the conditions that allow the villains to instigate conflict, nor do they do anything to prevent new villains from emerging. They save the world, but don’t do anything to change it.

This shortcoming is a big part of “Megamind” from the beginning. No matter how many times Metro Man defeated Megamind, he always ended up back in jail. From there, he always escaped. He never changed or reconsidered his actions until he actually succeeded. To some extent, Metro Man does exactly what keeps Spider-Man and Batman from effectively achieving their heroic goals.

Ultimately, the resolution that “Megamind” offers in the end is something that undercuts the hero/villain dynamic completely. In the end, both Megamind and Metro Man stop making assumptions about their roles and actually make choices of their own, for once. In Megamind’s case, his choice conveys something that no other superhero movie has dared to attempt.

He takes the same traits and abilities that make him a villain and uses them to become a hero. More importantly, though, he doesn’t do so because of a role based on an assumption. He does it because that’s what he chooses. When finally given a choice to do something with his abilities, he chooses to do good. That’s not just uplifting, even for an animated movie. It speaks heavily to the forces that shape our identity.

In the context of modern superhero movies, “Megamind” both parodies and subverts the foundation of the genre. It doesn’t just ask the question as to what would happen if a villain actually beat the hero. It asks whether those who identify as villains are capable of doing heroic things, if given a choice.

Even with more complex villains like Walter White, most superhero movies and superhero media, in general, still follow the same dynamic that trapped Megamind. They have a villain, put them in a particular role, and keep them in that role by locking them into a cycle.

For some inherently villainous individuals, like Lex Luthor, that cycle isn’t necessary. For others, though, it poses interesting questions that rarely get answered. The villains have their roles. The heroes have theirs. The story plays out and the heroes triumph, but does that have to be the end of the story?

“Megamind” dared to expand on that story and while it may have been ahead of its time, those themes are still relevant. As superhero movies continue to set new box office records, they will likely become even more relevant and “Megamind” will get the appreciation it was just too premature to achieve.