Lessons On Love, Expectations, And Tattoos 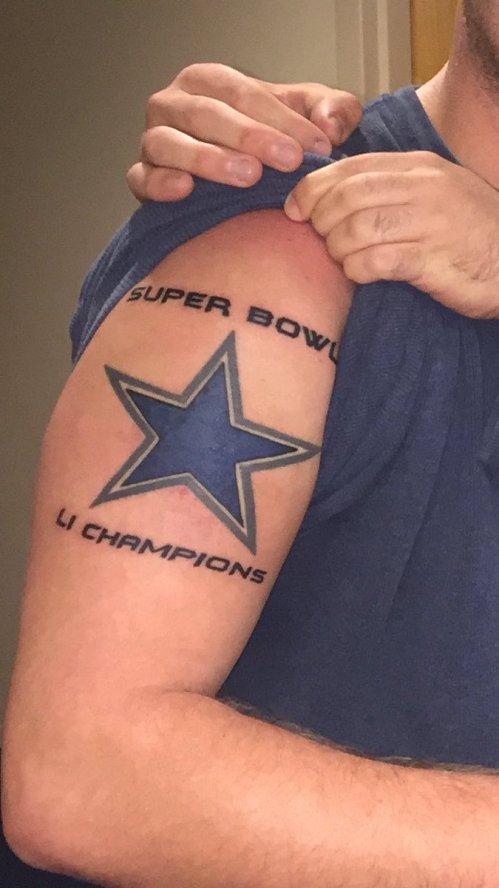 Lofty expectations can lead to loftier disappointments. It’s only when expectations turn into assumptions that disappointment becomes stupidity. That’s not some wise musing from some ancient Zen master in 4th century China. That’s just a colorful way of making sense of the world after surviving several decades on this planet as a human.

When it comes to erotica/romance and writing about it in novels, it’s important to set expectations and avoid assumptions. You don’t want someone to expect “Twilight” style romance, only to get “50 Shades of Grey” level kink. That’s just plain deceptive.

It can be a fine line. You don’t want to be too predictable, but you want to get readers excited. When I wrote “Skin Deep” and “The Escort and the Gigolo,” I made it a point to craft a certain level of mystery around the narrative. I didn’t want to tell a story where the outcome would be too obvious. That’s just not very exciting. It’s not very sexy either.

That brings me to the Dallas Cowboys. Bear with me. I promise this isn’t a complete non-sequiter. I promise I’m completely sober and coherent in crafting this post and there is a point to it. I just feel the best way to make this point is cite recent event involving one of America’s most popular franchises and not just because of how they play football.

In case you got lost in a cave or were trapped in a dungeon over the weekend, you probably know by now that the Dallas Cowboys lost their NFC Divisional playoff match against the Green Bay Packers by a score of 34 to 31. It was a damn good game. It might be the best NFL playoff game of the decade. For Cowboys fans, though, it hurt. It hurt like a baseball bat to the spine.

It hurt because the Dallas Cowboys were the number one ranked team in the NFC this year. They had the best record in the league at 13 and 3. They were, by far, one of the most dominant teams of the year. They were heavily favored to make it to the Super Bowl and win it. Losing in the playoffs to a 10 and 6 Packers team that they beat earlier in the season just adds to the sting.

For one fan in particular, though, the sting leaves some permanent scars in a very literal way. Cowboys super-fan Jordan Garnett was so confident that his team would win the Super Bowl that he prematurely got a tattoo on his arm, declaring the Cowboys Super Bowl champions back in early December. As of now, that tattoo is both dead wrong and a harsh reminder of his team’s failure.

So how does this apply to expectations about love, romance, and everything in between? Well, in many respects, it’s a fitting metaphor for arguments I’ve already made on this blog. I’ve talked about how the law and our culture sets us up for disappointment in both our romantic lives and our sex lives. When you think about it, a tattoo is not unlike the complex legal documents we sign when we legally bind ourselves to one another.

That’s not to say that legal proclamations are inherently bad. They exist for a reason and they definitely serve their purpose, even if parts of that purpose are grossly outdated. The problem for some people is the expectations of those who enter them. Sometimes, those expectations are either wholly unrealistic or completely misguided.

This man who boldly got his Cowboys tattoo is akin to someone who decides on a whim to marry a someone they just met at a chapel in Las Vegas. While that can make for an entertaining Ashton Kutcher movie, it can also lead to some heartbreaking disappointment. It may not be on the same level of disappointment that Cowboys fans are feeling right now, but it’s probably close.

When it comes to sex and romance, there are few instances where jumping the gun works out. There are all sorts of dirty jokes to be made from that previous sentence, but I won’t get into them, if only because it may be too personal for certain men. I’ll just add that thinking things through and feeling things through are two different processes. You may be able to get away with skipping one, but not both.

As kids, we’re taught to broaden our expectations. As adults, we’re taught to manage them. We’re pretty good at it most of the time, but when our passions get the better of us, it can make for some awkward moments. For some, it means having a grossly inaccurate tattoo. For others, it means setting themselves up for heartache and ensuring their genitals hate them.

For the lives we live and the romance/erotica novels I write, I think it’s wise to avoid these outcomes. I’m all for being passionate about something, be it a lover or a football team. Just be careful with your expectations. Heartbreak and tattoo removal are both very painful.