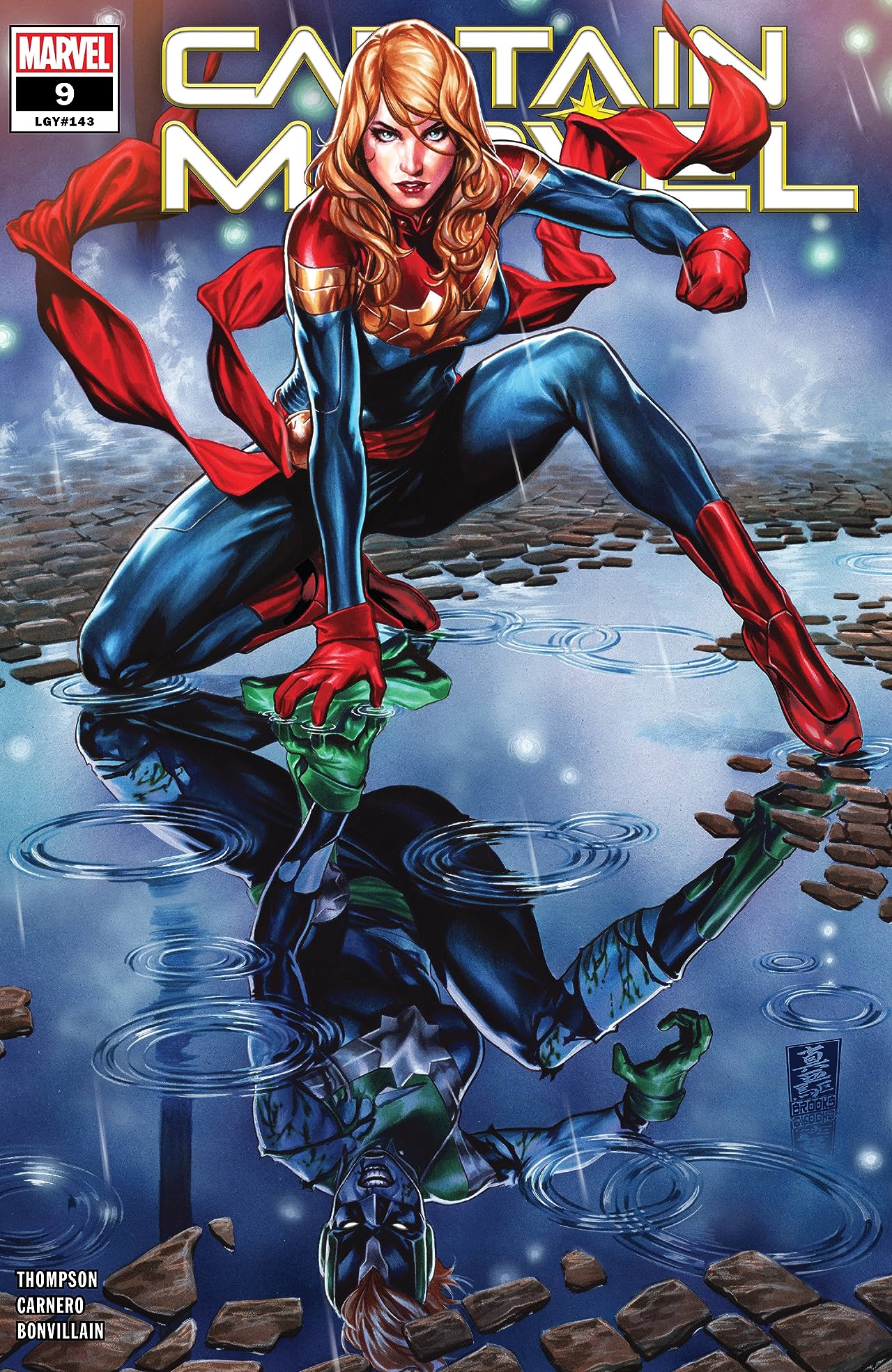 If you want to know the true character of a superhero, then just look at how they handle themselves when their powers are weakened or removed. The heroes with the strongest character won’t change in the slightest. They’ll keep being a hero. They just have to adapt to their limitations. The lousy ones tend to cower and whine like a kid who lost their binkie.

Carol Danvers has a history of losing her powers, her identity, and her bodily autonomy. Her character has been tested more than most and, through many setbacks and losses, she never stops being the hero she strives to be. Now, Kelly Thompson and Carmen Carnero are testing her again in “Captain Marvel #9,” but it’s a different test of character.

For the past few issues, Carol has been having issues with both her powers and her public image. She couldn’t handle a standard tentacle monster that seems to attack New York every other day in the Marvel universe. On top of that, news got out of her Kree Heritage, as revealed in “The Life of Captain Marvel.” Now, her status in the Air Force and the public trust she’s worked so hard to earn is in question.

If that weren’t challenging enough, there’s a new female hero in town named Star who may or may not be tied to her recent issues, but is already becoming more popular. That’s a lot of challenges, to say the least. However, “Captain Marvel #9” does not devolve into another story about a superhero becoming paralyzed by vulnerability and self-doubt. It certainly has all the right ingredients for that kind of struggle, but that’s not the direction that Thompson goes and that’s refreshing. There are enough stories about superheroes losing their powers and whining about it. Carol Danvers doesn’t whine. She confronts that shit.

She even finds time to squeeze in a little sexy time with her boyfriend, James “War Machine” Rhodes. Powers and reputation are important, but so is spending quality time with her significant other. Say what you want about Carol, but she knows how to prioritize. That, alone, is a strong measure of her character.

It also establishes that Carol isn’t going to deal with these challenges alone. She accepts help from the likes of Rhodes, Tony Stark, and her long-time friend, Jessica “Spider-Woman” Drew. She doesn’t always accept it immediately, but she does accept it in the spirit of finding answers.

That’s not to say she does so without an attitude. She’s still Carol Danvers. She has an attitude, regardless of what’s going on with her powers and reputation. She may lose her strength, but she doesn’t lose her edge. Thompson makes it a point to demonstrate that on many occasions and not all of them involve a shirtless James Rhodes. 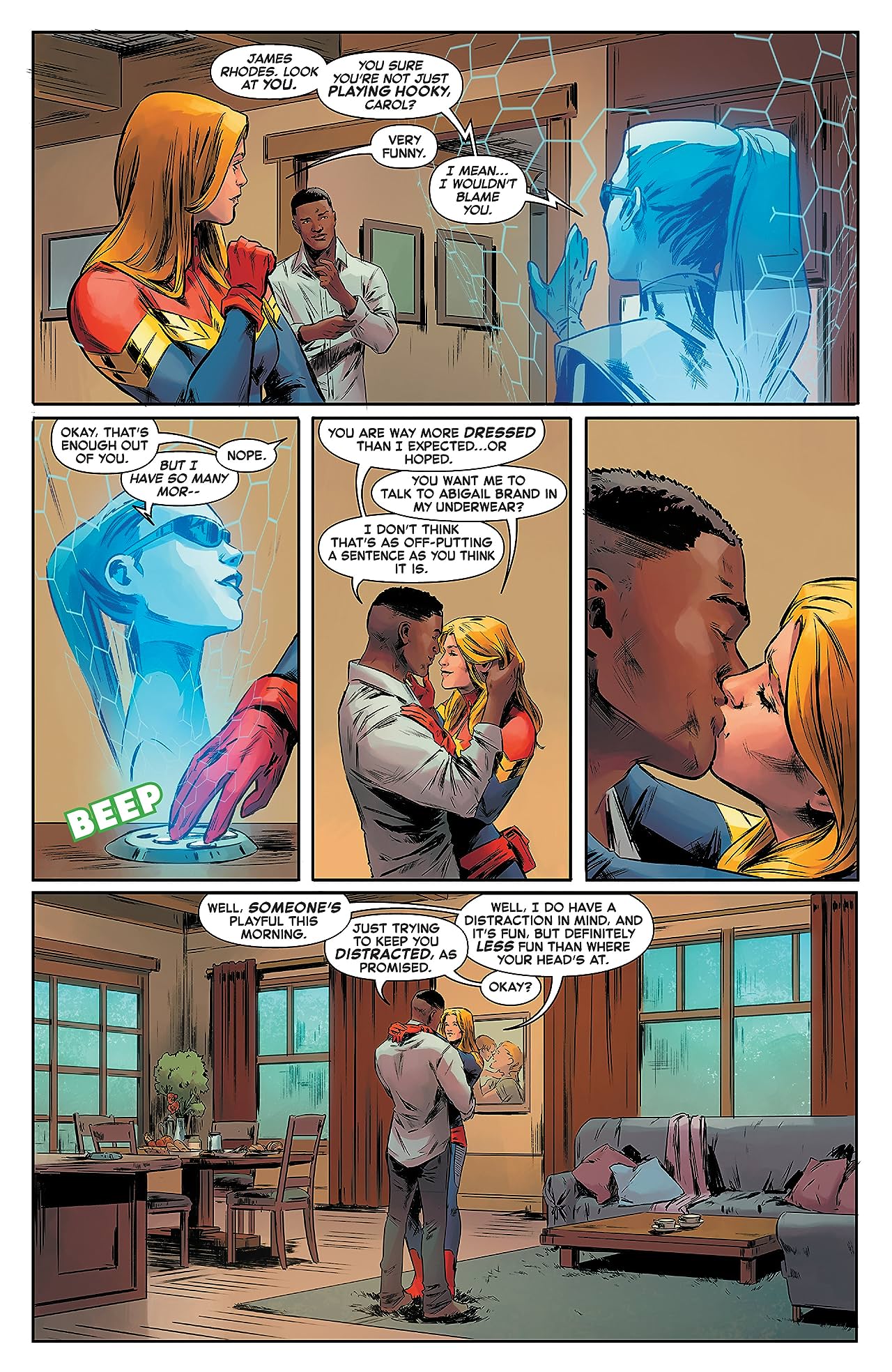 There’s a bigger mystery at work and it’s not just about Carol’s powers. There are issues surrounding the tentacle monster that Carol fought, as well as the recent appearance of Star. Some of those issues are explored more than others, but they all seem to have a common link.

Carol is still trying to be the same Carol she’s always been, but that’s just not possible anymore. She’s half-Kree. She knows this and now the entire world knows this. In a perfect world, that wouldn’t matter. She would still be the same person she’s always been and the people who adore her would just shrug it off.

However, the Marvel Universe is not a perfect world. It may have Deadpool and Squirrel Girl, but it’s far from perfect. People are still paranoid and untrusting for all the wrong reasons. It’s the same world that takes J. Jonah Jameson seriously. It has many flaws and they do put a strain on Carol’s efforts. 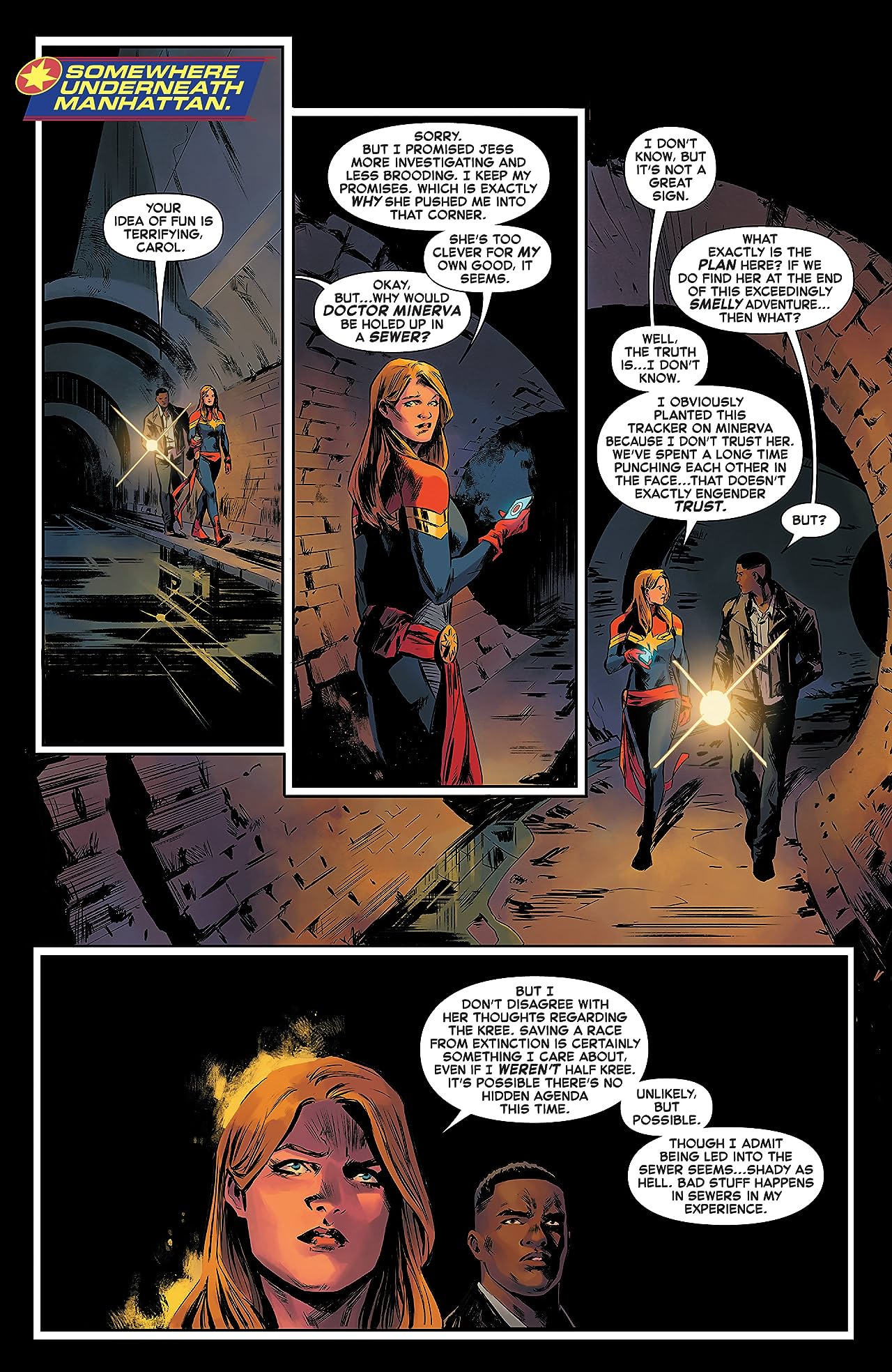 That’s what helps give “Captain Marvel #9” the necessary impact. Carol doesn’t lament or whine about the declining state of her powers, but she does show moments of frustration. It’s a fitting reminder that she still has a human side. It still bothers her when a part of her identity is taken because the public is uncomfortable with her heritage. It also bothers her that a new hero is in town to show her up in her weakened state.

She could whine about it like a teenage Peter Parker. She could use it as an excuse to be an asshole to her friends, as well. Plenty of other A-list superheroes have made similar excuses for less valid reasons. That’s not what she does, though. Thompson and Carnero don’t let Carol fall into that same trap. It’s a reflection of the kind of hero she is.

Beyond just providing Carol with a test of character, “Captain Marvel #9” also deepens the mystery surrounding her new Kree heritage. There are a few unexpected twists that add both complications and intrigue. For a story that could’ve easily become a predictable diatribe about a hero losing their powers, it’s both relieving and refreshing.

If nothing else, “Captain Marvel #9” proves that Carol Danvers has the character of a hero, regardless of superpowers or public perception. Having all those traits and still finding time to get sexy with James Rhodes further affirms that she deserves our admiration and respect.