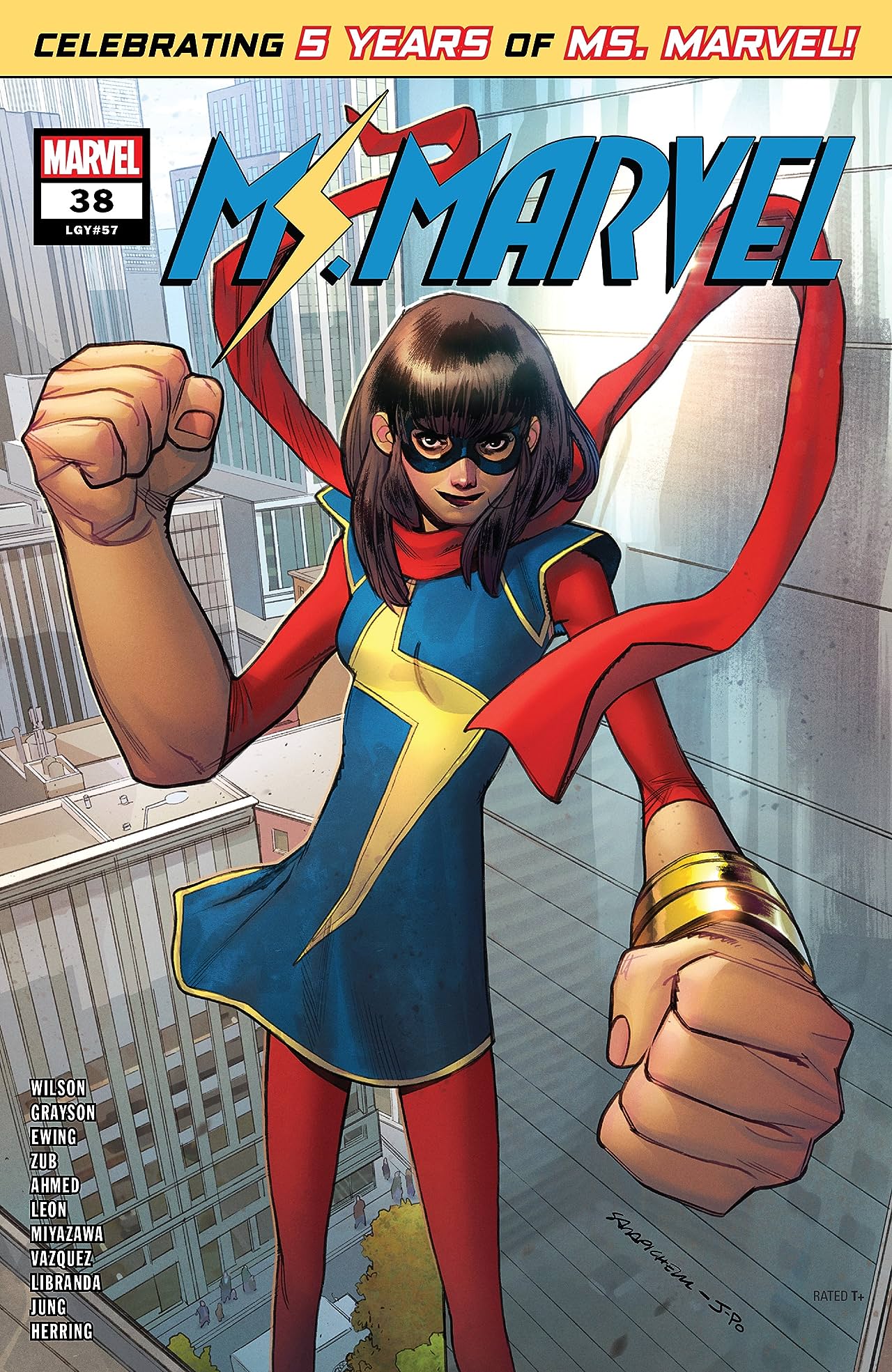 Fridays may be everyone else’s favorite non-weekend day of the week, but ask most comic book fans and they’ll say Wednesday holds a special place in their hearts. It’s that magical day when a new batch of comics enters the world and our souls are nourished by their awesome. I don’t care what kind of a week I’m having. When new comics come out on Wednesday, I find a reason to smile.

This week, with Valentine’s Day coming up and me being single, I needed more reasons than usual. Thankfully, this week brought us Ms. Marvel #38 and I’m already feeling the love. It also happens to be the five-year anniversary since her landmark debut. Given all the awards and accolades she received in that time, this definitely qualifies as a milestone worth celebrating.

I’ve gone out of my way to praise Kamala Khan before, citing her as a prime example of how to do female superheroes right in this crazy era. She’s young, lovable, determined, and idealistic. She’s also relatable, dealing with the same problems that most stressed out teenagers from Jersey City often deal with. If the past five years of comics haven’t convinced you of that, then Ms. Marvel #38 should help make that point. 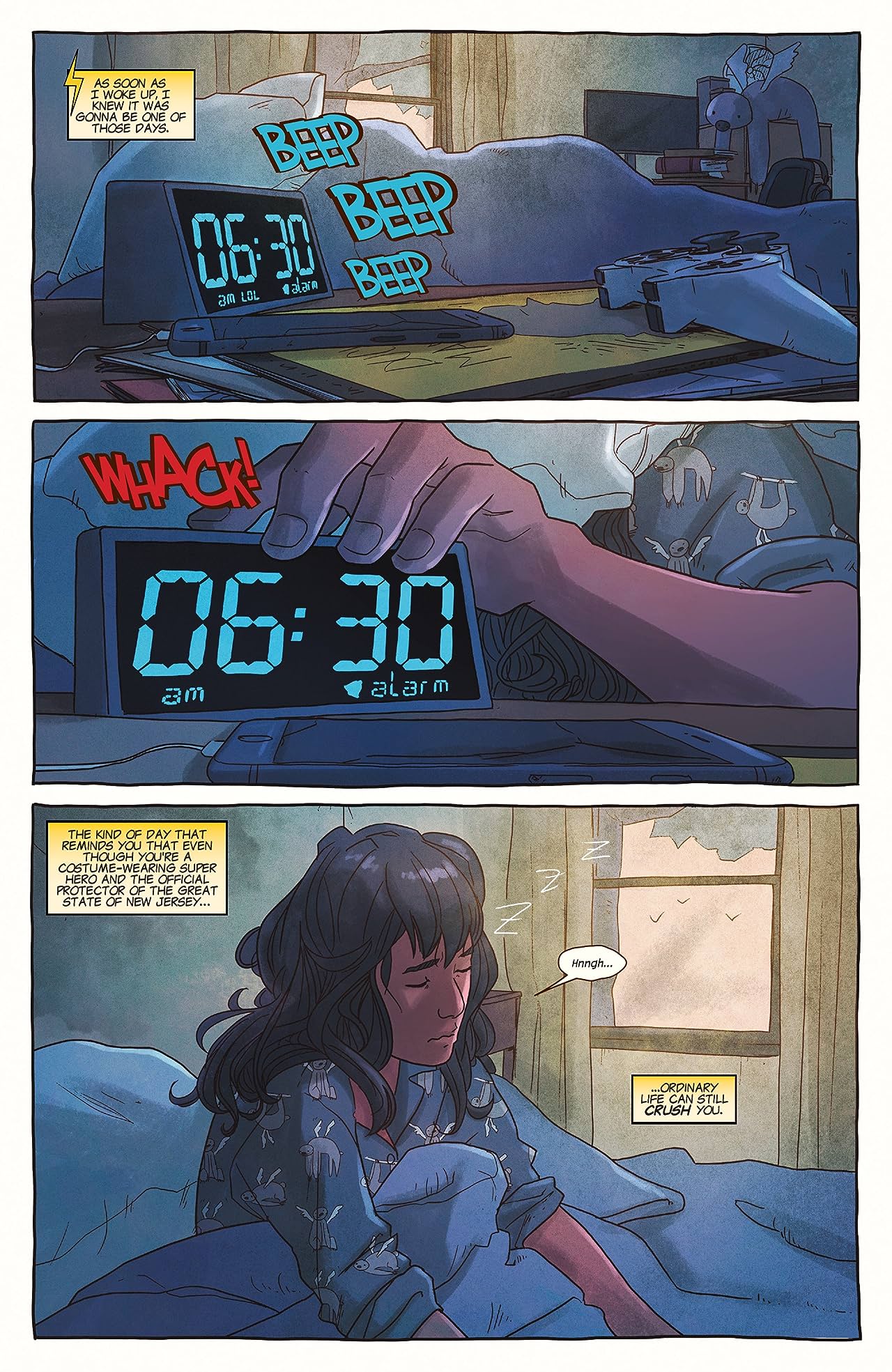 This milestone issue is a one-shot, self-contained story that starts off with Kamala being in a miserable mood. Then, after a brief, but colorful adventure with her friends, she remembers that being pissed off all day is a waste of a perfectly good day. It’s simple. Writer G. Willow Wilson doesn’t try to reinvent Kamala here. She just affirms why she has come as far as she has in five years.

A big part of that process involves highlighting the parts of Kamala’s life that don’t involve costumed villains, superpowers, and dealing with Deadpool’s dirty jokes. Wilson takes the time to show Kamala dealing with parents, siblings, and just getting to school on a day when she feels like crap. It may seem mundane, but Wilson uses it to humanize Kamala at every turn.

In the same tradition of Peter Parker’s Spider-Man, Kamala Khan’s Ms. Marvel is a teenage girl first and a superhero on the side. She doesn’t have the luxury of mixing her personal life with that of her superhero life. Both affect the other and rarely in a good way. She wants to be a superhero, but she doesn’t want to stop being Kamala Khan. That’s not just a challenge. It’s overwhelming. The stress really gets to her in this Ms. Marvel #38. Even without some major villain attacking, she’s doubting herself and her ability to manage everything. Then, she finds herself plucked into a strange new dimension where the most cheesy tropes of old RPG games come to life. If it sounds random, that’s because it is, but that’s exactly why it works.

Like a double shot of espresso and a slap upside the head, Kamala has to stop moping and be Ms. Marvel. At the same time, she has to help her friends who get sucked into this world as well. Nakia, Zoe, and Bruno do not have superpowers. However, they still end up helping Kamala every bit as much as her powers.

It’s one of the most common, but powerful themes of Ms. Marvel comics. Whereas supporting characters often end up being complications and liabilities for many heroes, Kamala’s supporting cast often supplement her heroics rather than hinder them. Sure, they still have to be rescued every now and then, but it never feels like anyone is a damsel.

There’s also more to this little dive into the world of overdone video game themes than just giving Kamala an adventure to go on. In between the colorful visuals that artist Nico Leon provides every step of the way, there are a few powerful moments in which Kamala and her friends realize how much they’ve grown and how much they haven’t. It’s a fitting testament to how far Kamala Khan has come in the past five years. On some levels, she’s the same insecure girl she was before she got her powers. On others, she’s grown a lot since then. Having watched her grow since her debut issue, I found Ms. Marvel #38 to be a satisfying testament to the kind of hero she has become.

For that reason and plenty others, Ms. Marvel #38 is an easy choice for my weekly quick pick. Even if you haven’t been following Kamala Khan’s story too closely at this point, this wonderfully-crafted, self-contained story will help reveal why she has become such a big deal in comics in the past five years. Hopefully, the next five years are just as enjoyable, especially if she ever finds her way into the MCU.

Beyond being a teenager, a girl, and a fan of superheroes and video games, Kamala Khan’s journey is one that’s easy to follow and even easier to root for. She starts off having a bad day and you can’t help but want to see her turn it around. We’ve all had bad days. Some are so bad that even superpowers can’t cheer us up. However, Ms. Marvel finds a way because she’s just that special.