The (Not So Secret) Sex Appeal Of Ron Swanson

What is it about certain men who seem to attract women without even trying? What’s their secret? What are they doing that other men aren’t? These are questions that many self-proclaimed love gurus and pick-up artists have attempted to answer. Since many of those gurus are frauds and many pick-up artists are assholes, I wouldn’t put much stock into those answers.

As a man, I’ve known men who can attract women so easily that it seems second nature. I’ve also known men who can barely talk to women, let alone attract them. Most men, and I would put myself in this category, fall somewhere in the middle. Whether you’re a hopeless romantic or a Don Draper level womanizer, it’s worth understanding the qualities that attract women.

That’s where Ron Swanson comes in. If you’ve watched every episode of “Parks and Recreation” like I have, you know why just saying that name out loud fills the immediate area with greater masculinity. That’s because Ron Swanson is a true man’s man. He has more masculinity in his mustache than most men have in their entire bodies.

I’ve cited Ron Swanson before as someone who embodies a type of masculinity that even self-proclaimed feminists can get behind. He’s strong without being a bully. He’s assertive without being cruel. He’s stern without being heartless. While he doesn’t always exercise good judgment when it comes to ex-wives, Ron reflects a level of manliness that men, women, and everyone in between can respect.

As such, Ron is in a unique position to provide insight into the world of masculine sex appeal. There are multiple instances throughout “Parks and Recreation” in which Ron attracts women. Whether he’s in a serious relationship with Diane Lewis or whipping a crowd of women into a frenzy as Duke Silver, it’s well-established that women find this man attractive.

While that probably isn’t surprising, considering Ron’s character is played by an equally-manly romantic in Nick Offerman, I feel it’s worth scrutinizing the particulars of that sex appeal. I believe there’s insight to be gained from Ron’s masculinity and how it attracts women.

Now, and I wish I didn’t have to disclose this, I don’t mean to imply that this assessment speaks for all women. I am not a woman, nor do I claim to know the various intricacies of the female thought processes. I understand that women have a variety of tastes when it comes to men. Not all of them are going to find Ron Swanson attractive.

When it comes to high standards of male sex appeal, though, Ron checks more boxes than most. That’s why I feel he’s worth singling out in the interest of scrutinizing the most attractive traits associated with masculinity. In doing so, I hope other men can learn from his example.

There are many ways Ron demonstrates these place throughout plays out in “Parks and Recreation,” but one episode in particular encapsulates the essence of his sex appeal. That episode is entitled “Lucky.” It takes place in Season 4 while Leslie Knope is in middle of her campaign for City Council, but Ron’s role in the side-plot to the campaign drama is where there’s more action, including the sexy kind.

That plot involves April Ludgate trying to hook up overly-energetic, exceedingly-dramatic Chris Traeger with Andy’s female professor. It’s not out of the goodness of her heart. Anyone who is familiar with her mannerisms knows that’s not her style. Her intentions are more self-serving because Chris recently suffered a break-up and April believes finding a new love interest will make him less annoying.

Her plan seems good on paper. She invites Andy’s professor, Linda Lonegan, to lunch with her, Andy, and Ron. There, they just happen to run into Chris, who’s eating alone. At first, everything seems to be working. Chris, through the charisma of Rob Lowe, shows a keen and overt interest in her.

While he’s doing this, though, Ron is sitting right next to Linda. He’s showing no romantic interest in her. He’s at a restaurant. His only interest is in how much steak he can eat and how many vegetables he can throw away. Ron does have a romantic side, but he also has priorities, especially when steak is involved.

It’s also worth noting that Linda is a women’s studies professor. In previous episodes, she makes very clear that she identifies as a feminist. I also have to note that she’s not the kind of radical, man-hating feminist that loves to fuel outrage culture. I would categorize her feminism as a healthy, balanced brand of second-wave feminism that dealt with more overt forms of gender inequality. 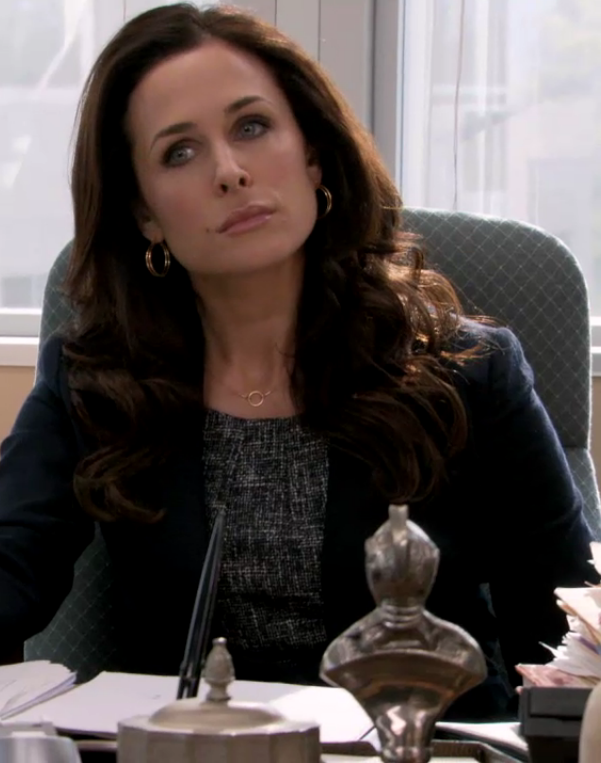 While Ron doesn’t bring those issues up, they’re a big part of Chris Traeger’s efforts to attract Linda. He effectively filters everything he says to Linda through a feminist lens, going out of his way to use the kind of rhetoric that demonstrates he understands her worldview and embraces it. Initially, Linda does seem interested in him.

Even though he’s very sensitive with his rhetoric, Chris is no beta male. He’s very masculine in his own right with how he takes care of himself and pursues things so energetically. He’s also played by Rob Lowe, who certainly has many traits of an attractive man, even by Hollywood standards.

Despite those traits, Linda ultimately rejects Chris’ invitation to join her for some land kayaking, which isn’t nearly as sexy as it sounds. Then, shortly after Chris leaves, she turns to Ron and invites him back to her place for activities that don’t involve kayaking. Ron, having had three steaks at this point, accepts and it’s overtly implied that they make love, as evidenced by him wearing his red polo shirt the next day.

To understand why Linda chose Ron over Chris, though, it’s important to break down how Ron acts in this scene. Even though Ron wasn’t attempting to attract Linda, she was still drawn to him more than Chris. According to some of the science behind the traits women find attractive in men, that actually makes sense.

From the moment Ron joined Linda in that scene, he was his usual poised self. He didn’t ask for specials from the waiter. He knew what he wanted, which was a porterhouse steak, medium rare. He was confident in his decision, as well as polite and assertive. Those are traits that are both attractive and respectful.

In addition to his demeanor, Ron’s mannerisms reflect confidence and certainty. Even though he eats three steaks, he’s not a slob. He conducts himself in a way that feels approachable and unimposing. Even if he doesn’t try to attract Linda, he does everything necessary to avoid repulsing her.

Beyond what he does, the way Ron speaks is just as powerful. He’s a man of few words whereas Chris will literally go overboard with adjectives and adverbs every chance he gets. His persona is endearing, but he also comes off as intense. For many women, including Linda, that can be a turn-off. Intense men tend to be complicated men and many reasonable women don’t have the energy for that.

On the other end of the spectrum, Ron is much simpler and transparent with his wants and desires. He says it himself in the early episodes of “Parks and Recreation.” He likes pretty, dark-haired women and breakfast food. That kind of simplicity makes him easier to understand and easier to work with. From Linda’s perspective, keeping up with Ron is much less tedious than keeping up with Chris. 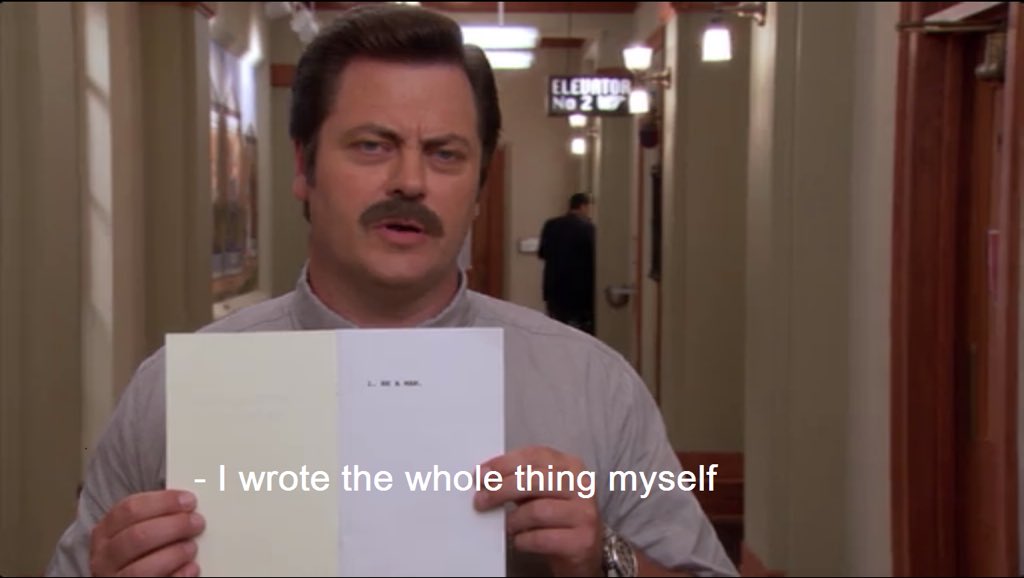 Even from a physical standpoint, Ron conveys more raw masculinity than the health-obsessed Chris. While Chris may have six-pack abs and a very healthy resting heart rate, Ron has a manly mustache and studies show that women find facial hair more attractive. While the presence of facial hair probably wasn’t the determining factor for Linda, it likely played a part.

In the end, Linda found herself between two very masculine men. She ultimately went with the man who demonstrates the most attractive masculine traits just by being himself. Her decision doesn’t just highlight the many ways in which Ron Swanson is personifies manliness. It singles out the traits that appeal to women on a basic level.

Ron Swanson is assertive, protective, frugal, stern, loyal, dedicated, and hard-working. He would function just as effectively as a hunter in ancient times as he does as the Director of Parks and Recreation for the city of Pawnee, if not more so. He’s someone who could still care for his lover if civilization collapsed and zombies overran the cities.

It’s here where Ron’s sex appeal goes beyond simply attracting women. Unlike egocentric pick-up artists or hyper-sensitive ladies men, Ron Swanson conducts himself in ways that men and women alike can respect. In turn, he treats men and women with similar respect.

He doesn’t hold women to a different standard. He treats Linda as an equal and not a prize to be won. He leaves it up to the woman to decide if she finds him attractive enough to be with. In the end, he made Linda’s decision both easy and appealing. It’s the kind of masculinity that men, women, feminists, men’s rights activists, egalitarians, and Americans of all stripes can get behind.