Storm Of The X-men: A Better Role Model For Women And Girls

I used to think some issues were completely apolitical. Seriously, who could create a political firestorm out of puppies, cat videos, and chocolate? I still want to believe that there are some things beyond our collective ability to taint, but when there are coherent men claiming that Satan uses Pokemon Go to corrupt people, I can’t help but question that belief.

I also used to think that Wonder Woman’s place as a cultural icon and a role model for women was beyond dispute. Sure, she has some kinky subtext in her origins, but she’s still a powerful character in modern pop culture. She’s a strong, passionate woman who protects the innocent and fights injustice with the heart of a warrior. How could her status as a role model possibly be disputed?

Well, the humorless asshats who petition the United Nations and weak little shits who take them seriously decided Wonder Woman is just too much woman for them to handle. Apparently, being a badass warrior who fights injustice and protects the innocent isn’t enough because she’s too damn sexy. Seriously, that’s the UN’s reason for ditching her as an ambassador to women and girls.

It still makes me want to spit fire and shit bricks. So a woman can do everything and anything to make the world a better place, but she can’t look like someone that some people want to see naked? What the fuck does that have to do with being a role model?

I could spend the next five blog posts ranting angrily about this issue, but I like to be more productive with my anger. I understand that there’s only so much, in other words nothing, that posting angry words on the internet can accomplish. With that in mind, I’m going to take a deep breath, drink a glass of whiskey, and try a different approach.

Since the folks at the UN and the humorless asshats who petition them are so keen on making this an issue, I’d like to do a public service and propose a solution. I’m not going to convince humorless asshats that Wonder Woman isn’t too sexy. I understand that these are people who tremble in fear at the thought of women being too naked and men being too fond of naked women. I can’t hope to change that.

With that in mind, I’d like to nominate another iconic woman for the role of UN Ambassador to women and girls. I believe there is another cultural icon who can be a symbol to women and girls all over the world. She’s also a badass superhero who protects the innocent, fights injustice, and looks damn good while doing it.

Ladies, gentlemen, and those of unspecified gender, I hereby nominate Storm of the X-men for the ambassadorship for women and girls all over the world. Before the same humorless asshats who rejected Wonder Woman start whining, give me a chance to make my case. Then, go ahead and find a reason to reject this amazing testament to female badassery. I dare you.

While it’s true that Storm hasn’t been around as long as Wonder Woman, having made her debut in 1975’s Giant-Sized X-men #1, her impact on the world of comic books and on pop culture is beyond dispute. 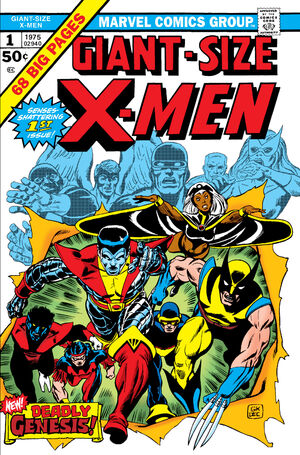 Storm is one of those characters who just arrived at the best possible time. She’s a minority within a minority, a African woman playing the part of a superhero at a time when most of them still looked like extras from a “Leave It To Beaver” rerun.

She helped usher in a new wave of diversity in both comics and popular culture. She came at a time when people started to realize that not every superhero had to be like Superman, Batman, or Wonder Woman. It was also a time when people started realizing that minorities can have a place in popular culture. Some people are still shocked by this for some reason.

This made Storm’s ascension to being one of the greatest female superheroes of all time all the more impressive. It’s not just that she was a woman of color playing the part of a superhero. She was never just there to fill a quota. She actually contributed to the growth and success of the X-men.

Look at her resume and you’ll find a woman who made her presence felt and not just because she can direct a lightning bolt up your ass. She’s been a leader, a teacher, a friend, a lover, and a champion for peace. Even recently, she’s led the X-men in a peaceful struggle, despite her people being routinely gassed to death.

She didn’t start with many advantages either. She wasn’t a princess like Wonder Woman. In fact, she started at the opposite end of the spectrum, having been a thief and pick-pocket early in life. She had to fight to survive, eventually seeking new opportunities with the X-men and escaping a life of crime. In a world where millions of children live in poverty, that makes Storm much more relatable and relevant.

In addition, Storm isn’t the kind of female hero who becomes a damsel in distress every other week. In fact, she’s been one of the X-men’s heaviest hitters, as opposed to characters like Kitty Pryde and Jean Grey, who seem to faint or need rescuing every other issue.

Storm has also lead the X-men, having fought Cyclops for this role in Uncanny X-men #201. In case you’ve forgotten, Cyclops is a white guy. That should make ultra-liberal hipsters at least somewhat happy.

She’s also not like Lois Lane or the Invisible Woman, whose character is often defined by the relationships she has. Storm has always been her own person and done her own thing. That doesn’t stop her from pursuing romance for all the right reasons.

She’s pursued relationships with the likes of Forge, Black Panther, and Wolverine. She was even married to Black Panther for a while. Granted, that marriage got annulled because Storm dared to not side with her husband during a major clash between the Avengers and X-men, but that should only strengthen her case, especially in the eyes of more radical feminist types.

She’s not overly traditional in her views of love and relationships. She doesn’t believe in a woman becomes a man’s glorified pet when she decides to marry him. She can still have thoughts of her own. There are still men in the Middle east and this country that are appalled by such an idea.

She also believes strongly in loyalty and understanding, which any woman would need if they dared to date someone like Wolverine. She doesn’t always have to be in a relationship, but when she is, she puts in the effort. She does her part. Just don’t you dare have the audacity to skip foreplay.

In terms of looks, which the UN just couldn’t overlook with Wonder Woman, Storm definitely has her own unique style. It’s not overtly sexual. Her costumes rarely emphasize her breasts, butt, or any other body part that might make a man’s pants too tight. If anything, her most defining physical feature is her white hair, which she’s not afraid to style in all sorts of exotic ways.

Storm is beautiful. She knows how to be sexy too. However, sexuality is not a big part of her deal. She’s not like Starfire in that she channels her sexuality in unique ways. She is sexual, but in a very healthy way. She can count all her lovers on one hand. How many politicians can make that claim these days?

I could go on and on. I could spend multiple blog posts arguing why Storm is the perfect role model for women and girls. I’m sure there are still some humorless asshats out there who will nitpick her to death in hopes of finding an excuse to complain about her.

They’ll probably throw around terms like “cultural appropriation” or “colonialism” to discount Storm’s qualifications. Maybe she’s too exotic. Maybe she’s too obscure because she’s part of a team. Maybe having an Oscar-winning actress like Halle Berry play her in multiple movies is somehow a problem.

Whatever the case and whatever the excuse, Storm’s legacy speaks for itself. Storm’s place in popular culture, superhero comics, and being uniquely sexy is secure. If that’s not enough for the UN and the asshats who petition them, then that’s their problem.

7 responses to “Storm Of The X-men: A Better Role Model For Women And Girls”