How Mixing Politics And Religion Ruins Both 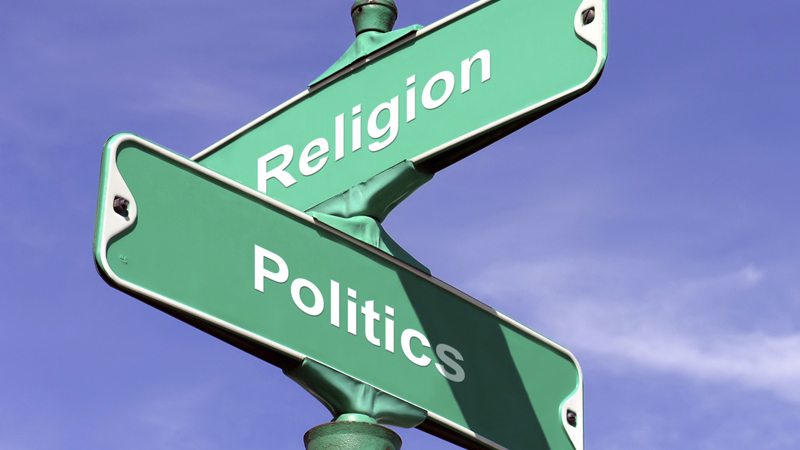 Some things just aren’t meant to go together. Whether it involves putting pickles on a peanut butter sandwich or wearing a bra with a tube top, certain combinations are just inherently incongruent. At best, it’s messy, unattractive, or unappetizing. At worst, it does legitimate damage to everything that went into it.

In terms of volatile mixtures, religion and politics is probably the worst. There’s a reason why it’s a general rule of etiquette to avoid discussing either in a civil scenario. Both have a tendency to bring out that sense of blind tribalism that’s still hardwired into us and both have inherent flaws that keep even the most reasonable people from having a productive discussion.

That’s not to say religion and politics can never be discussed in a civil, respectful manner. It’s just exceedingly difficult, especially in these very polarized times. However, I am confident in stating that it’s practically impossible to mix religion and politics in a way that fosters greater civility. If anything, it derails any related issue beyond the point of absurdity.

I say this as someone who tries to be reasonable whenever discussing religion and politics. That’s not easy because I’ve made my criticisms of organized religion and certain political leanings quite clear. I don’t deny that I have my biases, but I make a concerted effort to see things from the other side.

When politics and religion mingle, however, I can’t justify that effort. From my perspective, there’s just no way to mix either without them becoming hopelessly corrupt.

It’s not difficult to understand why they become intermingled. Both are powerful institutions with immense influence over large swaths of people. They’re either going to coordinate or conflict with one another and coordination is almost always more productive, regardless of goals.

On paper, it almost makes sense. If you’re looking to strengthen your political position, adding religious elements that resonate with a significant segment of the populace can only help your effort. Even if those same people are skeptical of your rhetoric, they’ll give you the benefit of the doubt if you subscribe to the same theology.

When put into practice, however, it’s the logistical equivalent to mixing nitro and glycerin. It doesn’t take much to trigger a volatile reaction. More often than not, that one reaction triggers many more like it. Before long, the corruption isn’t just extensive. It becomes entrenched, so much so that it’s seen as entirely normal.

The history of the religious right in the 20th century is well-documented. While there had been previous efforts to effectively codify Christian dominance in the United States, it had always been a fringe position. In fact, there was a time when churches discouraged mixing religion with politics because politics was seen as a dirty business wholly concerned with worldly affairs.

Then, after a combination of major social upheavals and significant scientific advancements, organized religion became more reactionary. The rise of fundamentalism, which was not exclusive to Christianity, prompted certain religious organizations to do more than preach a more rigid form of theology.

To some extent, those organizations had no choice. There’s only so much you can do to convince ordinary people that they should be more devout, denying themselves comfort, novelty, and fun. In order to have greater influence, they need political power. However, gaining that kind of power almost always requires some level of corruption and at that level, corruption is a two-way street with many potholes and blind spots.

That’s not just an opinion held by cynics and casual observers, either. There is plenty of historical precedent that demonstrates what happens when religion and politics cooperate too closely. A cursory glance at the history of the Middle Ages offers plenty of documented evidence alongside absurd, yet historically accurate anecdotes.

It may be difficult to imagine for those who have grown up in secular societies, but there was a time when the Catholic Church was the only game in town and every political entity had to acknowledge that. They were basically a secondary government that could levy additional taxes, except they called them tithes. As an organization, their wealth was beyond measure.

On top of that wealth, the Pope could essentially make or break kingdoms by approving or denying marriages. If you said or did anything that offended, undermined, or in any way inconvenienced the church, they could do more than just condemn you. They could legally kill you and call it holy.

Regardless of the theology involved, this kind of power made the Catholic Church prone to all sorts of corruption. In some cases, it manifested in the election of Popes with decidedly unholy behavior. At one point, the papacy was actually sold between Popes like a high-stakes auction for gold and land.

While stories of organizational corruption can be comically absurd, other types of corruption did real harm. Like any powerful organization, the church dedicates a considerable amount of time and effort to preserving that power and isn’t always reasonable about it. That led to church-supported atrocities that included witch burnings, war crimes, and even animal abuse.

Again, little of these activities can be justified on a theological basis. There was nothing in the bible or the teachings of Jesus that promoted an all-encompassing organization that blurred the line between religion and politics. Most of that occurred through a convergence of various unholy forces that range from political ploys to theological debates. Conveniently, God was always on the side of whoever won out.

After centuries of corruption, other forces more powerful than any prayer or Pope eroded the influence of the Catholic Church. Some would argue that losing the power to make war and influence kings helped get the church in touch with the core teachings of Christianity. I think that’s a tenuous argument, given how dogmatic it is on certain outdated traditions, but I do see some merit in it.

Even with this historical precedent, the religious right keeps making a concerted effort to wield the kind of power that the Catholic Church once did. You need only compare the Republican Party’s platform in 1912, which contained no reference to any deity, to the overtly anti-demographic policies espoused in contemporary Republican talking points.

It’s in that blending of policy and theology in which both ultimately undermine one another. From the religious side, there’s nothing in the bible that demands tax cuts for the rich or bans in stem cell research. However, thanks to being entertained with conservative politics, this somehow becomes entwined with their theology, even if it means ignoring actual teachings of Jesus Christ.

From the political side of things, it means policies don’t even have to have a logical, pragmatic element to them anymore. They can only be viewed in the context of whether or not said policies get or maintain the support of religious adherents. Even when those policies are objectively bad for the environment and the poor, they support them. They’ll even support policies that require a big, bloated government by default.

In a sense, for religion and politics to function alongside one another, both require significant levels of hypocrisy. A religion will have to support policies that run counter to its theology and a political organization will have to support measures that run counter to its principles. The only way to make that work is to make excuses, which only invites corruption.

These aren’t minor complications. These are flawed processes that ensure neither religion nor politics can benefit without undermining themselves along the way. Anything they accomplish must come at the expense of principle or ideology. For conservative politics and religious dogma to pursue their goals, it must in turn use the same draconian tactics of Big Brother, even when it directly contradicts their highest values.

From that perspective, should we really be surprised when politicians with the backing of the religious right turn out to be utter hypocrites?

7 responses to “How Mixing Politics And Religion Ruins Both”