Cutting My Own Hair: My Experience (And Mishaps) 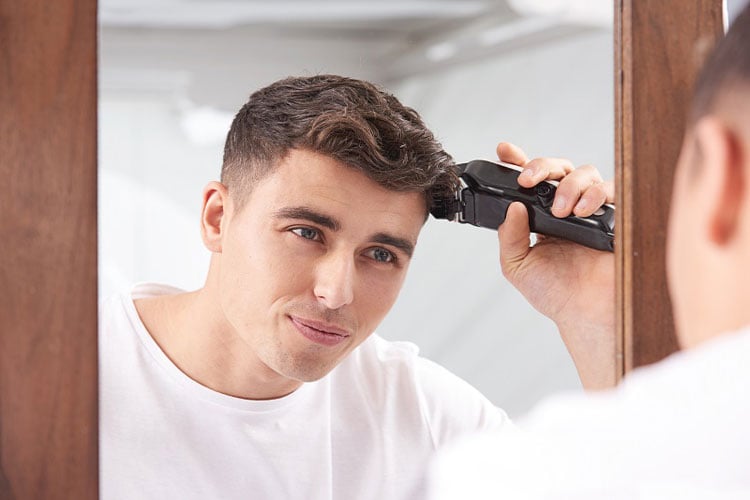 These are strange, difficult, and incredibly frustrating times. The COVID-19 pandemic has undermined many big things in our world, from major sporting events to movie releases. Between that and the egregious death toll, it’s easy to be overwhelmed by the big effects of this pandemic. However, sometimes it’s the little things can be just as impactful.

Just recently, I experienced one of those little impacts. For the first time in my life, I gave myself a haircut. I want to say I’m proud of it. I wish I could say it turned out just fine. Unfortunately, I don’t have the energy to be that dishonest with the fine people who read this blog.

It’s true, though. I did cut my own hair this past weekend. I’d genuinely hoped I wouldn’t have to, but my timing with respect to haircuts couldn’t have been worse. I typically get my hair cut every two months. It’s nothing fancy. I just get an overall trim that insures my hair looks neat, classy, and well-kept. It’s rarely that much of a hassle.

Then, the mass shut-down came and every barber shop within a 100 mile radius was closed. At that point, I was well past due for a haircut and it showed. My hair started looking less and less kept. I learned back in college that if I don’t cut my hair regularly, I end up looking like an extra in a grunge band from 1993. If I let my beard grow, I’d look like a mountain man with dandruff.

I really resisted the inclination to cut my hair on my own. Finally, after waking up one morning and seeing my hair in the mirror, I decided it was time. I didn’t have much to go on, so I just bought a cheap pair of clippers from Walmart, put a paper towel over my sink, and went through with it.

I wish I could say it was simple. I’d hoped it would be simple. It wasn’t. In fact, it took longer to cut my own hair than it would have if I’d gone to a barber shop. That’s because cheap clippers and messy, oily hair don’t exactly complement one another. I had to keep buzzing over the same areas on my head multiple times because the clippers always seemed to miss something. It got so tedious my arms got tired.

Eventually, I cut my hair to a point where it’s at least somewhat presentable. I wish I could describe it. I’ll just say it’s somewhere between a crew cut and a buzz cut, but with some messy spots in the middle. Just getting it even was way harder than it should’ve been. It’s still not even, but at least it’s manageable.

I won’t say it looks ugly, but it’s not exactly flattering, nor is it professional. If I walked into a job interview with this haircut, I’d probably get docked a few points. It was enough to make me hope I don’t have to cut my hair again. It also gave me much more appreciation for the barbers and stylists of this world.

Seriously, we miss you. My hair misses you. I hope this quarantine ends soon so you can get back to making us all look good.

For those of you in my position who badly need a haircut, do yourself a favor. Either find someone else who can cut it or use videos like this one to make sure you still look presentable.