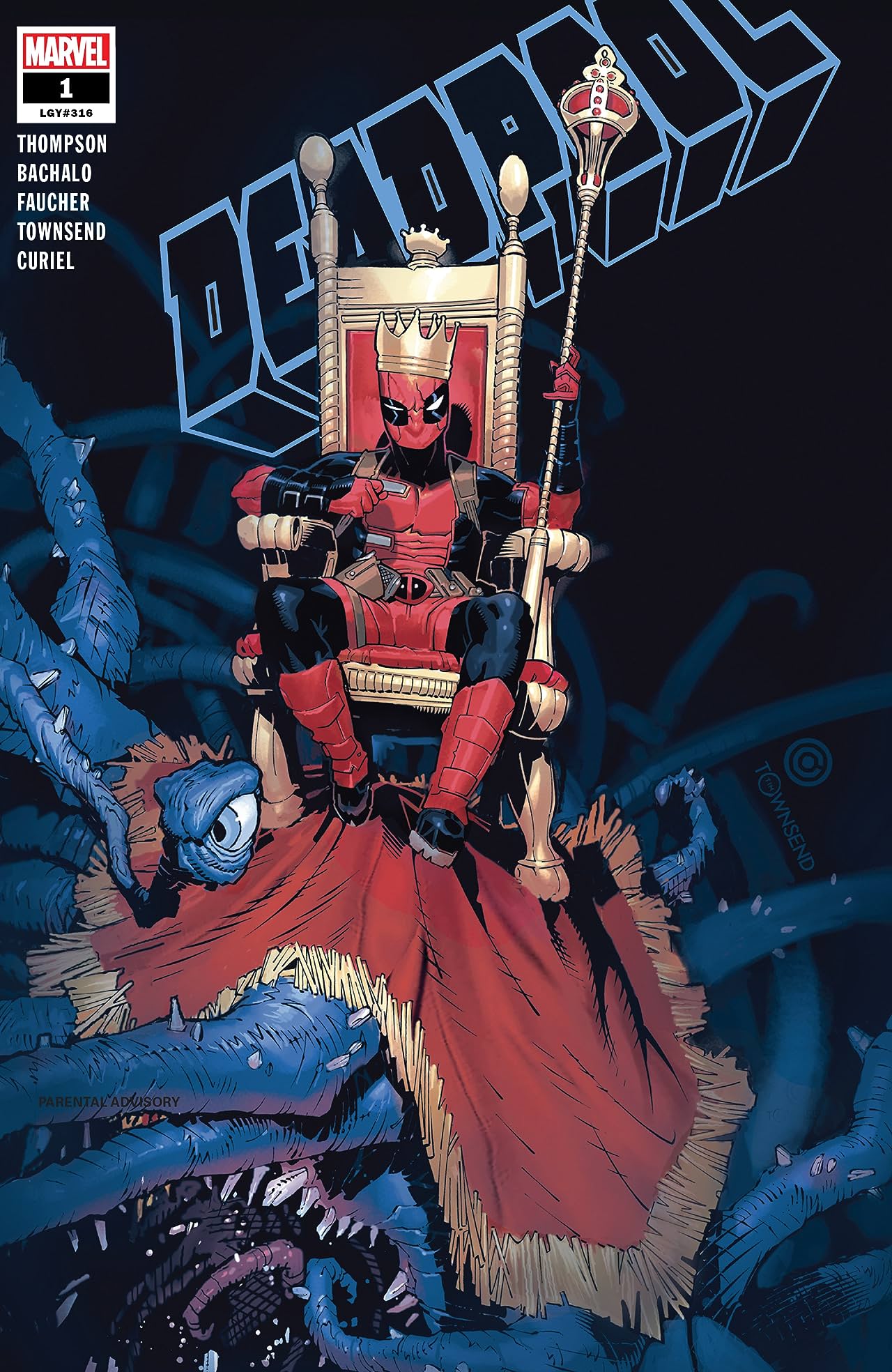 Sometimes, the right job finds you before you find it. I would even argue that’s how most people find the right job. Only a select few of us are born with the natural talent and the right opportunities to do what we love. Unless your name is Tom Brady, Elon Musk, or Taylor Swift, you usually end up in a job you don’t expect, but still embrace.

Take that premise to an absurd, vulgar, and violent extreme, and you basically get the life of Deadpool in a nutshell. As a kid, I doubt Wade Wilson thought he would grow up to be a wise-cracking, fourth-wall-breaking, sharp-shooting mercenary who frequently teams up with time travelers played by Josh Brolin. Then again, is it really less absurd than wanting to be an astronaut?

Deadpool, for all his insane antics and violent tendencies, often finds himself in in unexpected roles, but they’re usually roles that makes the most of his talents. Writer Kelly Thompson and artist Chris Bachalo take that concept, run with it, and inject it with some fresh absurdity in “Deadpool #1” by making him King of the Monsters.

That’s not a ceremonial title, either. That’s a real, actual role in the Marvel Universe and Deadpool essentially stumbles ass-backwards into it. It’s every bit as crazy, fun, and entertaining as it sounds. 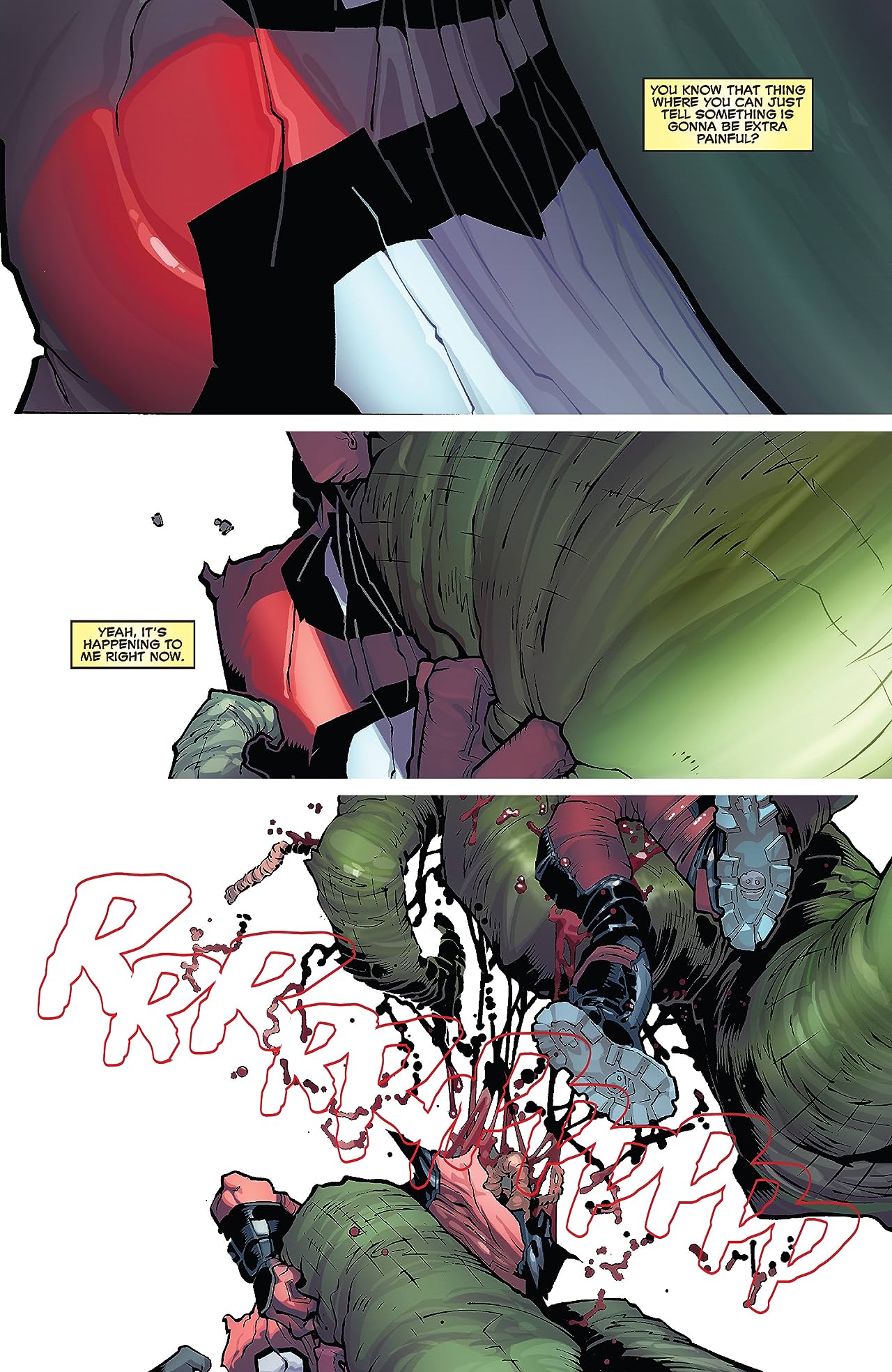 Deadpool comics aren’t known for high concepts, cerebral plots, or fanciful world-building. These are comics built on a foundation of gratuitous violence, dirty jokes, and concepts that even a paste-eating fifth-grader can understand. Thompson embraces that style perfectly in “Deadpool #1” and even finds time to work in a few colorful cameos.

The story doesn’t begin with Deadpool making it his lifelong mission to become the new King of the Monsters. He’s not the kind of guy who thinks that far ahead. He’s just another gun-toting mercenary celebrating his birthday with a mailman he kidnapped. Like I said, he tends not to think that far ahead.

He then lands a new mercenary gig that involves traveling to Staten Island to slay someone who goes by the completely unsubtle title, King of the Monsters. The gig pays well and up front so Deadpool isn’t inclined to ask too many questions. There is a more detailed lore about who the King of the Monsters is and why they’ve set up shop in Staten Island of all places, but none of that matters to Deadpool

What matters is that it puts him in a position to inflict a little rampant destruction on a hideous, Lovecraftian monster that is beautifully rendered by Bachalo’s art. It’s simple. It’s fun. It’s everything you want a quality Deadpool comic to be. “Deadpool #1” checks all those necessary boxes, but it doesn’t stop at the basics. Thompson throws in a few bonuses as well, including appearances from Elsa Bloodstone and Gwenpool. While Elsa’s appearance is a bit more pragmatic, being that she’s Marvel’s premier monster hunter, Gwenpool just adds a little extra entertainment value.

What other comic besides a Deadpool comic would that both work and make perfect sense? I challenge anyone to find one.

Even with those cameos and the quirky details, “Deadpool #1” still has a coherent plot. Deadpool becoming King of the Monsters is just part of it. Even if he didn’t set out to achieve that title at first, it’s not something he just shrugs off. He now finds himself in this strange new role that comes with responsibilities, crowns, and minions. He’s going to try and have a little fun with it. That’s just how Deadpool approaches things.

It ensures his story rarely has a larger, over-arching theme. Deadpool is not the kind of character who can carry an epic, Lord of the Rings level quest on his own. He just doesn’t have the necessary attention span. He just takes random jobs, follows them to whatever messy outcome they inspire, and takes it from there. The fact it includes so much R-rated entertainment along the way is just a nice bonus. “Deadpool #1” doesn’t reinvent the character or how his comics are crafted. Thompson and Bachalo stick to the basics, but still find a way to mix in some extras. Some of those extras even lend themselves to bigger stories that promise even more absurdities, some of which will require more monsters and more explosions. It’s every bit as appealing as it sounds.

It even makes the case that Deadpool is uniquely qualified for his new role as King of the Monsters. While he’s not a monster and is hardly qualified to be king of anything not associated with a Bea Arthur fan club, he knows how to handle himself around monsters. He knows how to slay them and get along with them. Isn’t that a prerequisite for any king?

Being so immature and unbalanced, Deadpool is uniquely suited to his new title. He may still be a mercenary at heart, but he now finds himself in an unexpected role that fully complements some of his most eccentric traits. It’s a fertile foundation on which to build Deadpool’s story. With monsters, violence, and baby sharks, I’d say Deadpool’s new reign is off to a promising start.

With that, I say all hail the new King of the Monsters!