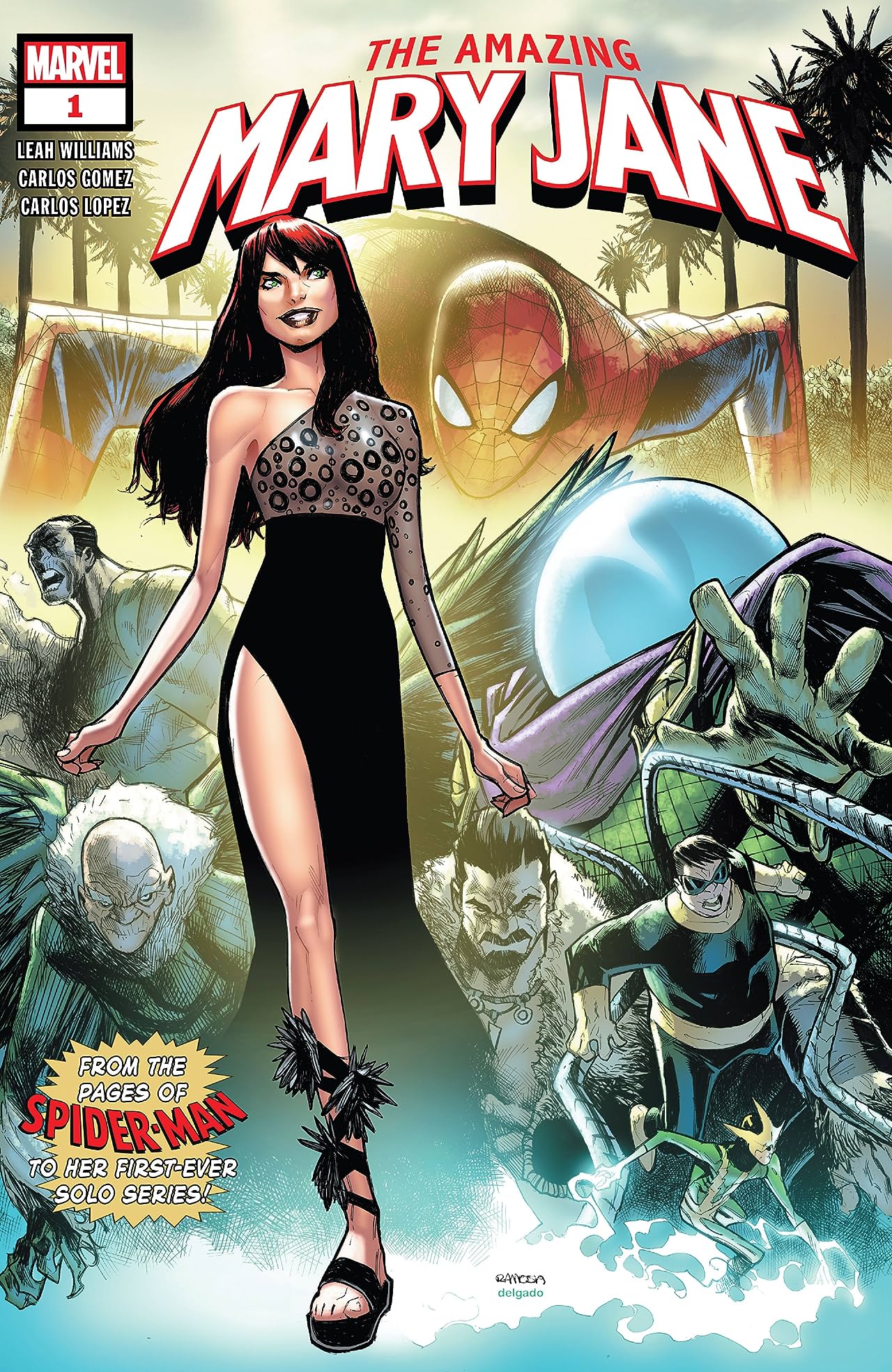 An iconic character is only as great as their supporting cast. On their own, icons like Batman, Superman, and Captain America can only do so much to carry their story. Like Santa Claus without his elves, they’re limited in how compelling they make that story without other characters around them adding dramatic fuel to the story.

This is especially true for characters like Spider-Man, whose supporting cast is one of the strongest and most in extensive in comic book history. If you need proof, just remember that a movie based around one of Spider-Man’s greatest villains grossed over $856 million. However, if you need further proof that Spider-Man’s supporting cast is what makes him so amazing, then look no further than Mary Jane Watson.

She’s not just the super-hot, super-sexy redhead who gets every straight man’s blood flowing for all the right reasons.

She’s not just the eye candy that makes for some of the best variant comic book covers of all time.

Mary Jane Watson makes Spider-Man a greater character because she’s a great character in her own right. She didn’t come into his story as some wide-eyed bimbo who existed only to make Peter second-guess the merits of male superheros wearing skin-tight outfits. She has her own story, motivations, and aspirations.

Most of the time, her story is relegated to secondary sub-plots in Spider-Man’s stories. While some of those stories are great for both characters, she’s never had a chance to carry her own story. Leah Williams and Carlos Gomez finally give her that chance in “Amazing Mary Jane #1.” It’s still a story closely tied to Spider-Man, but Mary Jane is the one leading the charge this time. It’s not a radical reinvention of who she is or what motivates her. Williams and Gomez simply shift the spotlight to her and let her work her amazing charisma. It’s a simple approach, but it works.

Mary Jane is still an aspiring actress. Like many aspiring actresses, she’s looking for ways to further her career. The basic premise of  “Amazing Mary Jane #1” is that she gets an opportunity to do just that. It even involves a role that she’s very familiar with. She’s caught up in a battle involving Spider-Man. For her, she really doesn’t need to do much acting.

There’s just one glaring problem and it’s not just that her role is reduced to being a beautiful woman in a skin-tight outfit. This opportunity that she desperately wants happens to be courtesy of Quentin “Mysterio” Beck, one of Spider-Man’s most colorful villains and one whose star really rose with “Spider-Man: Far From Home.” 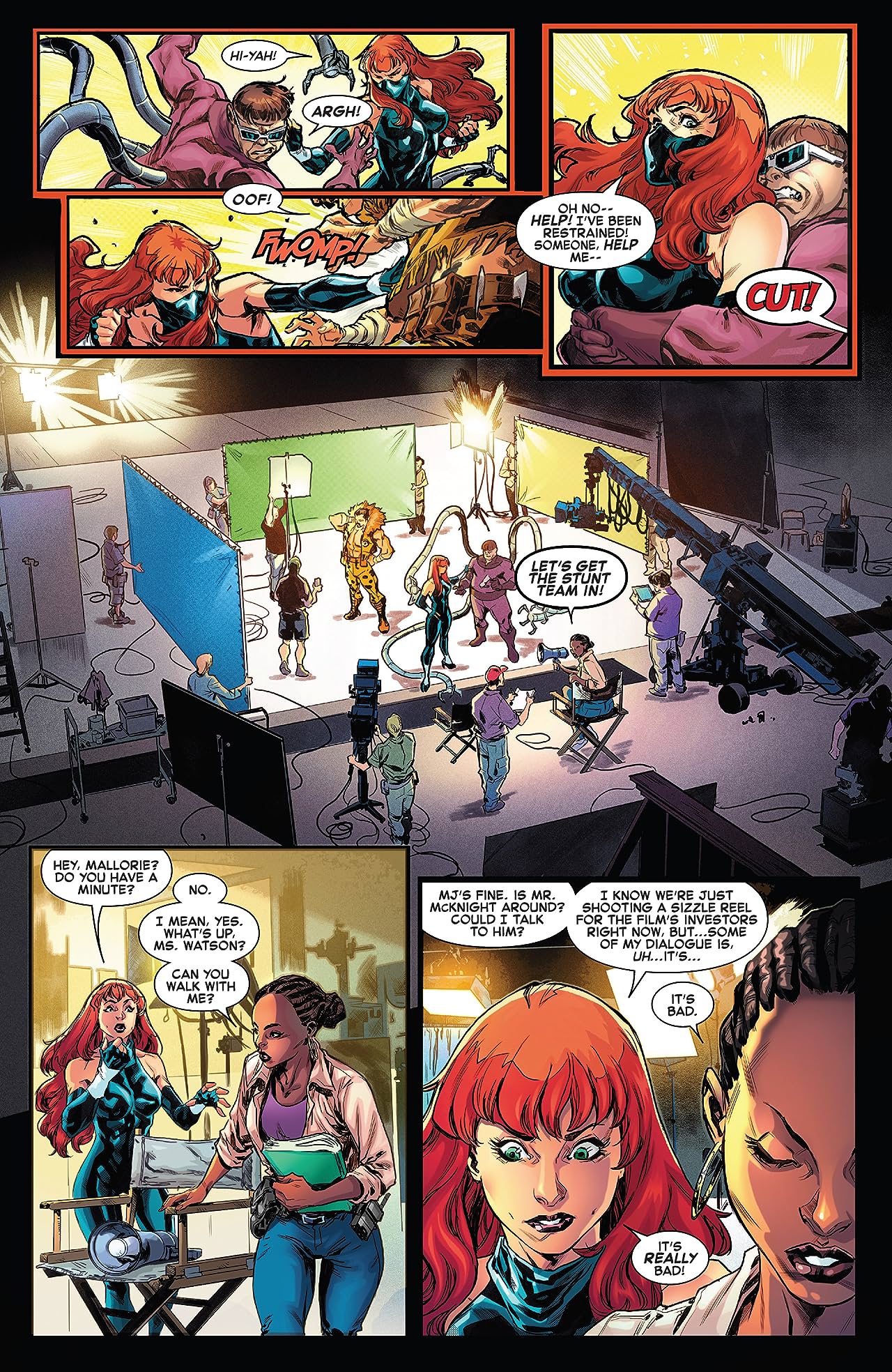 It’s a situation that might make even the most ambitious actress hesitate. At the same time, it puts Mary Jane in a position to show her greatest strengths, none of which involve superpowers. She’s able to carry the story with her personality and William captures it wonderfully on multiple fronts.

Mary Jane doesn’t just smile and nod to go along with everything. She speaks her mind, but never in a way that makes her sound condescending or self-centered. She sees something wrong with the role she’s playing and she confronts it. When the nature of that role is objectively bad for both her and the movie, she says so.

It’s an issue ripped right from recent news surrounding the Hollywood horror stories that ambitious actresses have endured. It’s a sensitive, hot-button issue, but one that “Amazing Mary Jane #1” doesn’t ignore. The characters don’t ignore it, either. It’s a real issue that’s worth addressing, even in a superhero comic.

However, that issue never derails the story or takes away from the substance of the plot. “Amazing Mary Jane #1” is not about Mary Jane Watson calling out the predatory practices of Hollywood producers. It’s about her finding out that this major opportunity her in the center of Mysterio’s latest endeavor.

Being Spider-Man’s girlfriend, she knows better than most that this endeavor will likely involve something going horribly wrong. Since she’s in Hollywood and Spider-Man is in New York, she can’t count on being rescued this time. 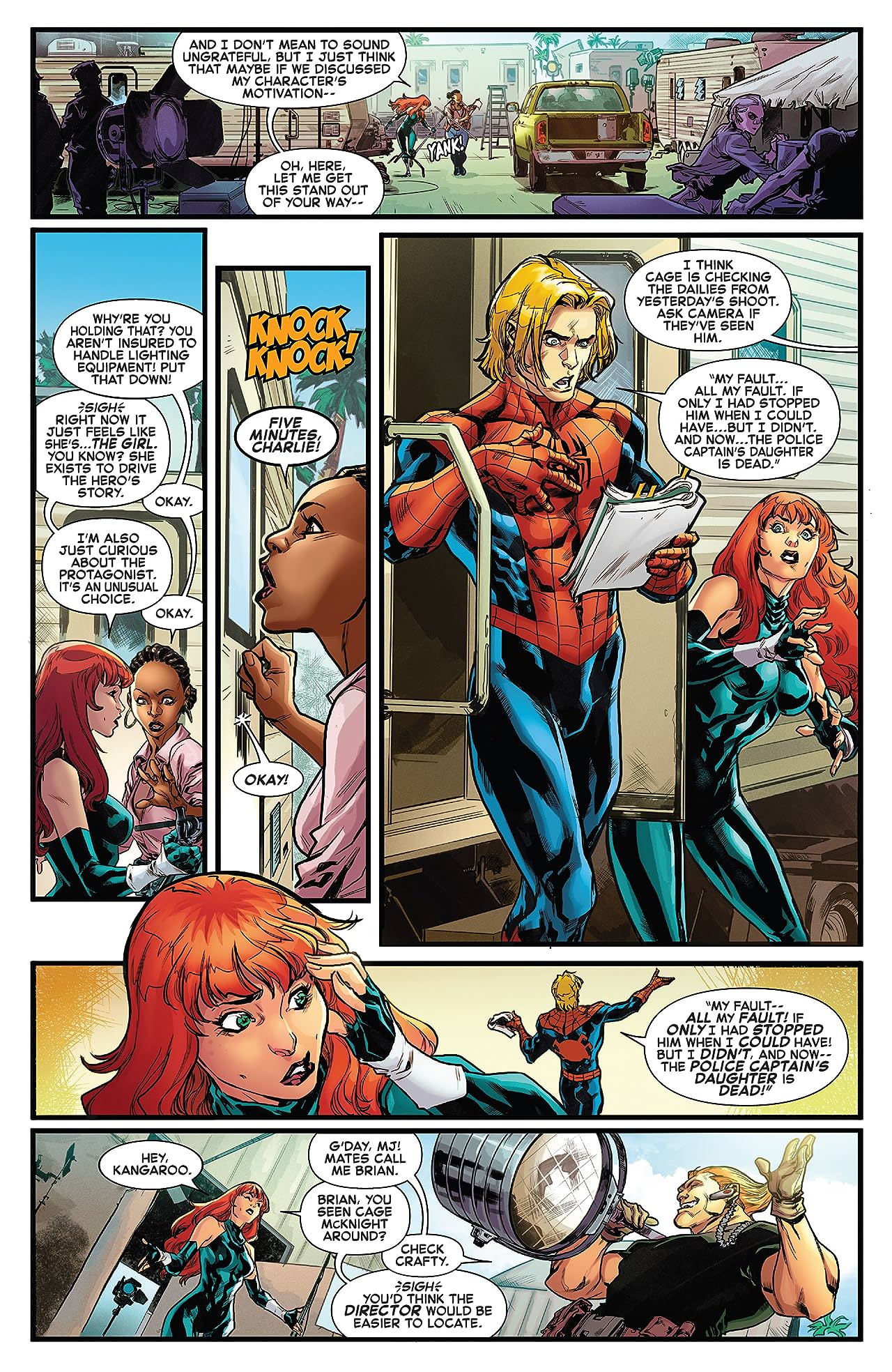 It’s a great setup that perfectly blends Mary Jane Watson’s personal story with one of Spider-Man’s most well-known villains. She’s still part of Spider-Man’s story, but this is one in which she shoulders the responsibilities. On top of that, she has to do that without the aid great power.

At the same time, the very absence of that power is part of what makes Mary Jane such a strong supporting character for Spider-Man. She knows she’s not the one with the superpowers. Even Spider-Man knows this. That doesn’t stop her from accepting those responsibilities. She, more than anyone, shows Peter Parker that responsibility doesn’t end with stopping muggers, criminals, and guys with fish bowls for heads.

Even when she’s accepting responsibility, Mary Jane Watson still knows how to have fun. Williams goes out of her way to capture that in “Amazing Mary Jane #1” and Gomez makes her look great while doing it. The sweet, playful moments between her and Spider-Man often bring out the best in both characters. They’re the kind of moments that are sure to piss off Mephisto.

Peter Parker will always be the center of the greater Spider-Man universe, even when that universe involves talking pigs. However, Mary Jane Watson makes that universe more compelling and dramatic with her presence. She also makes it sexier, but that’s just a nice bonus. “Amazing Mary Jane #1” further proves that she’s capable of being amazing in her own right.