I Wish Ads Were THIS Honest

I saw this ad on a message board today and just had to share it. It’s a wonderfully relevant summation of the issues I discussed last week on radical feminism and sexual objectification. I know I said I didn’t want to keep talking about those issues. Believe me, I’d rather get a prostate exam from a lobster than talk more about these issues. Sometimes though, you just have to make an exception when it’s warranted.

When I saw this ad, I knew it was warranted and I’ll gladly make an exception because it reflects a point I didn’t get a chance to make in my previous posts. In our overly politically correct culture, we tend to get so emotionally worked up about overly specific shit that we can’t see the forest from the trees. If we’re not careful, we end up burning the whole goddamn forest down.

This particular tree already has wilting branches and dead leaves. It’s the tree of sex in advertising. Like peanut butter and jelly, Jack and Coke, or ketchup and damn near everything, it’s the go-to target for the politically correct crowd that loves to complain about objectification of women. To be fair, it’s hard to blame them when the target it this big.

However, this whining (like pretty much all forms of whining) doesn’t fix anything, nor does it acknowledge the actual context of the situation. It’s the other C-word that offends so many people without realizing it. That word, context, is the key to making sense of so many politically correct absurdities.

In the case of this ad, it basically says what shouldn’t need to be said to a reasonable mind, male or female. The fact we have to actually remind ourselves these days is deeply troubling for both genders. I guess some things just need to be belabored.

With that in mind, I’ll belabor the same point that this ad belabors so retreat to your safe space if you have to:

It’s okay for a heterosexual man to find a beautiful woman attractive.

I’ll give everybody a moment to stop gasping. I know. Shocking, isn’t it? Are we really at the point in our culture where we have to remind ourselves of shit like this? Do we really have to explain slowly and carefully to people that there is a context to all this sexy advertising? I’m usually pretty good at resisting the urge to punch my computer screen, but some days are harder than others.

There’s this disturbing trend in our culture where we’re shaming heterosexual men for finding women beautiful. We may as well shame them for breathing, farting, and coughing as well because this isn’t some elaborate patriarchal conspiracy. This is human biology 101. Heterosexual men find beautiful women attractive. Why does that have to be controversial?

Beyond the controversy, there’s another important point in the ad that’s worth belaboring. Again, retreat to your safe spaces because this may get heavy.

This is where I feel like people give way too much credit to the human attention span. We live in a world where everyone cares about a dentist killing a lion one day and Kim Kardashian’s ass the next. We, as a species, are not good at paying attention for long periods of time. Anyone who fell asleep at an economics lecture understands this.

This is where my old friend, caveman logic, comes into play again. We have to have a finite attention span. Pay attention to one thing for too long and either a lion eats us or we forget to procreate. Our brains are wired in a way to help us forget trivial shit and what’s more trivial than an ad?

That’s not to say an ad can’t be offensive. An add that uses the Nazi holocaust to cell an oven is a bit harder to ignore because it exploits an egregious tragedy that actually killed people. A beautiful woman is not on that same level. It’s not even in that same time zone.

Now, there’s one more point in the ad I’d like to make and this is probably something else that requires certain people to hide in their safe space.

Ads that involve beautiful women are targeted towards heterosexual men

I know it’s obvious. I know it’s downright inane, but it still needs to be said because it’s a context that some politically correct types just refuse to see. These ads aren’t just thrown out into the world to piss people off. There is another reason for it and, shockingly enough, it involves selling shit to a specific market.

Like it or not (and some do hate it), heterosexual men make up a good chunk of the market. They are a sizable chunk of the human population and, as I’ve pointed out before, tend to be much more visual compared to women.

They also make a lot of money. Heterosexual men don’t have babies and, historically speaking, have made up a larger chunk of the workforce. It wasn’t really until the 20th century that women, thanks to the development of birth control, were able to join the workforce in larger numbers.

Heterosexual men have money. Advertisers want them to buy their products so they can get some of that money. They make money by getting the attention of customers and what’s the easiest way to get the attention of a heterosexual man? Use a beautiful woman. It’s not just pragmatic. It’s basic biology. I’ll even argue there’s beauty in that biology. 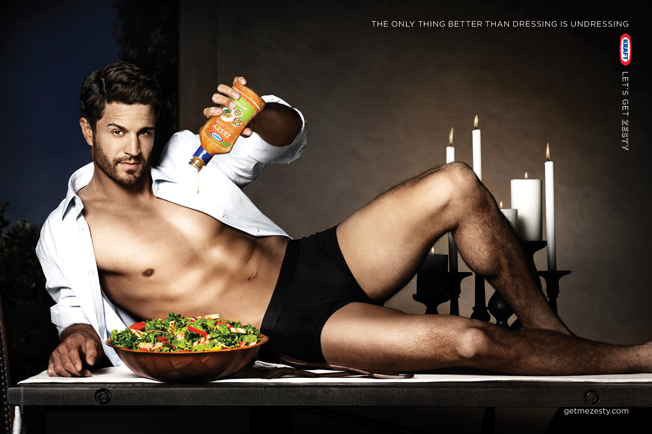 Are you back from your safe space? Have you avoided any possible trigger warnings? Good. I’m glad I could share this ad and this insight.

As an aspiring romance/erotica writer, I want to appeal to everybody, be they heterosexual male, transsexual female, or something in between that I’m not equipped to define. As such, it doesn’t make sense and is kind of a dick move to single out one chunk of that population for shaming.

One response to “I Wish Ads Were THIS Honest”