Another Wednesday has arrived. Once again, it’s another Wednesday without the weekly dose of joy that is new comics. It wasn’t a surprise, but it still happened. All major publishers, including Marvel and DC, have announced that no new comics will be released this week, except for digital only titles or previously scheduled compilations.

There aren’t enough words in any language for me to articulate how much this sucks. However, rather than spend another lonely Wednesday complaining about it, I’m going to make an effort to find a shining gem in this sea of doom and gloom.

Yes, major publishers are still delaying their shipments and releases. That’s to be expected of big, entrenched businesses who have been following a particular model for decades.

At the same time, independent comic creators still have an opportunity to publish their work on established platforms outside that entrenched system. Thanks to sites like Comixology, some creators can bypass the typical comic publishing model altogether and release their work straight to the public. As a lifelong comic fan, I can’t say enough about these creators.

While the selection of independently created comics tends to be limited, there are still quality books within this crop. I would even argue that the current lack of major titles gives them a chance to shine in ways they never would’ve been able to in an ordinary market. If a book is really good, it deserves to be singled out for the joy it brings during these difficult times.

To that end, I’d like to highlight one particular book that came out today. It’s not a superhero comic. It’s not from a major publisher, either. Despite all the forces working against it, this book still found a way to shine through on this gloomy Wednesday and for that, I’m happy to single out its greatness. 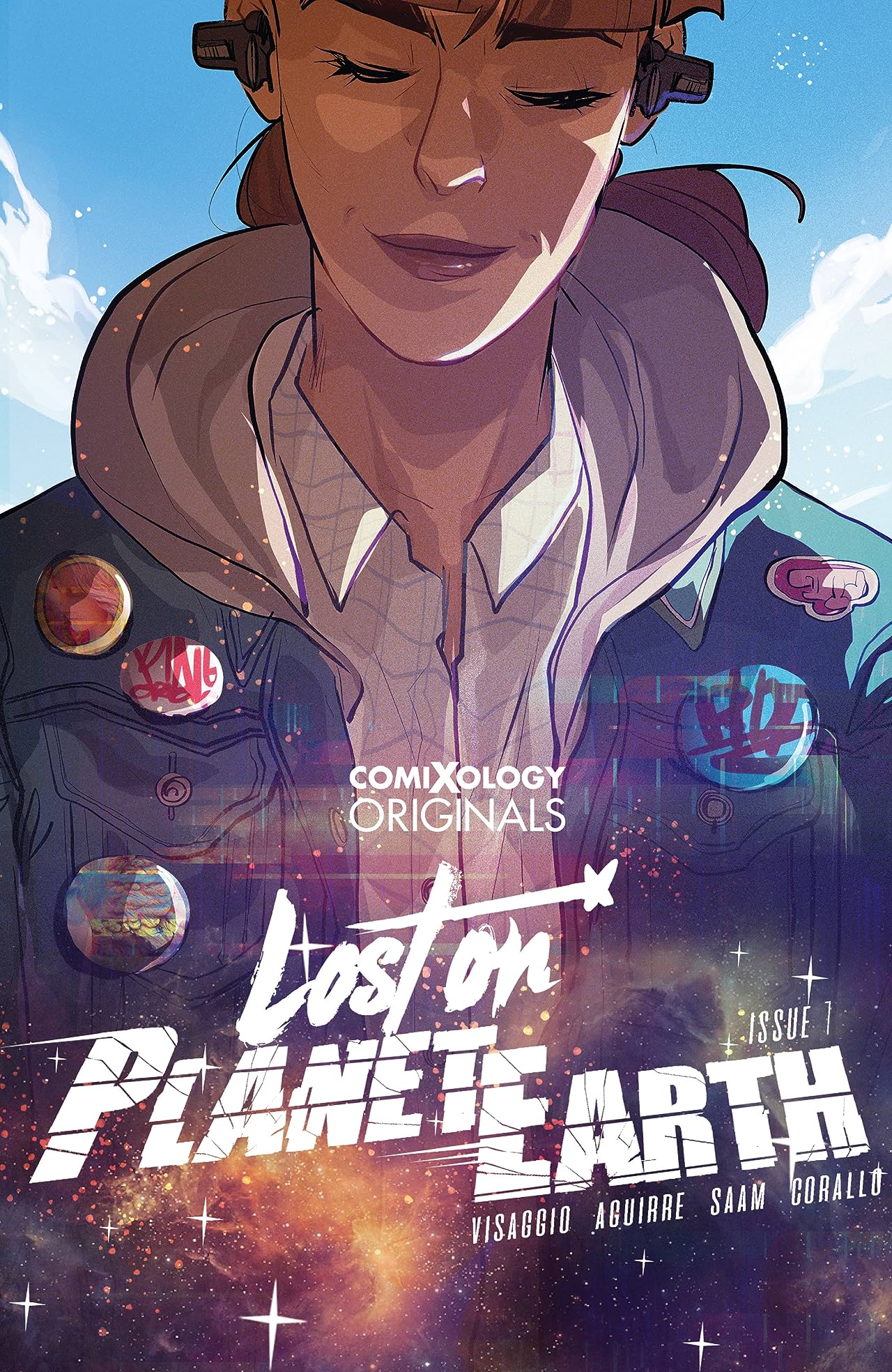 Some stories don’t need to be full of epic space battles and alien invasions to be impactful. In fact, the sheer grandiosity of those stories often make it hard to relate to. Most people aren’t billionaire playboy philanthropists or a demigoddess born into a race of warriors. We can be in awe of their exploits, but overwhelmed by their impossible standards.

That’s exactly why “Lost on Planet Earth #1” is so refreshing. It’s a story built around futuristic, sci-fi aesthetics in a post-scarcity world. It involves alien races, star ship fleets, and a universe full of interplanetary intrigue. At the same time, it feels like a down-to-Earth, slice of real life story that real people in the real world can relate to.

Written by Magdalene Visaggio, with art by Claudia Aguirre, we follow the boundless ambition of a young woman named Basil Miranda. She starts out as focused, determined, and dedicated. She’s like that person we all knew in high school who went out of their way to overachieve, setting a high bar for herself and doing everything she can to top it.

She’s not smug or self-righteous about it, either. She’s also not someone who relies on a super soldier serum, bites by a radioactive spider, or a billion-dollar bank account to pursue that ambition. She’s just a very driven young woman who decided at age 5 that she knew what she wanted to be when she grew up. From that day forward, she worked hard every day in pursuit of that goal.

Then, the day of her exam to join the interplanetary fleet, something unexpected happens. She’s asked a question that she never could’ve prepared herself for. It’s a simple question, but one people in real and fictional worlds alike struggle to answer.

What makes you happy?

It sounds basic, but it has profound implications, both for Basil and for anyone who has ever thought about it for more than five seconds. In all her ambition, she never stops to contemplate whether this goal she decided when she was five-years-old is what will make her happy.

Yes, it will make her successful.

Yes, it will put her in a position to have a major impact on her world and others.

However, will it make her happy?

That triggers a full-blown crisis in Basil, which Aguirre’s colorful artwork captures beautifully every step of the way. Suddenly, this determined young woman who was so disciplined and certain is now utterly overwhelmed. She doesn’t know what to do with herself and struggles to figure that out. I won’t get into spoilers, but it does lead her down some unexpected paths.

What Visaggio does with “Lost on Planet Earth #1” is remarkable in how it flips the script on an ambitious character’s journey. It’s easy for anyone in a sci-fi fantasy world to look up at the stars and yearn to explore, thrusting themselves into new conflicts. It’s also easy for someone in the real world to envision their future, thinking this is what they want for themselves.

It’s a lot harder to stop for a moment, take a look inside yourself, and ask why you pursue these goals in the first place. Do you genuinely think they’ll make you happy? Is success and achievement really the same as happiness and fulfillment? These are questions some people go their whole lives without contemplating. Many people, especially young people like Basil, aren’t inclined to think that far ahead.

These heady concepts help make “Lost on Planet Earth #1” a unique story within a sci-fi worlds. They’re concepts that are worth exploring in the real world, as well. We can all identify with Basil’s unexpected struggle in this story. In times of crisis when we have more time than usual to think about these things, this book asks some profound questions that are worth answering.

To Magdalene Visaggio and Claudia Aguirre, thank you for making this comic and releasing it during difficult times like this. As a comic fan and just someone in need of a more uplifting story, I really appreciate it.