Comics are a unique form of media in that its structure allows a certain kind of story to be told. It’s not like a movie in that it comes out once every few years and costs over $150 million to produce. It’s not like a TV show either that requires broadcast rights, streaming services, and dealing with cable companies.

The simplicity of comics, unfolding on paper and needing only ink and text to convey the story, gives it near unlimited capacity for telling big stories with bold concepts with vibrant imagery. There’s no need to pay Michael Bay or a special effects team to bring it all to life. It just requires a bold idea and someone with incredible art skills to make it real.

A comic like “Age Of X-Man Omega #1” is one of those books that fully utilizes the greatest strengths of the medium. It builds entire worlds while exploring bold concepts on a level that, if it were a movie, would take the gross national product of a small country to make real.

Writers Zac Thompson and Lonnie Nadler, alongside artist Simone Buonfantino, created an incredible world. Mutants, the X-Men, and their struggle took on an entirely new context within a new realty, courtesy of Nate Grey, one of the X-Men’s most overpowered characters. Age of X-Man has been a story about the strengths and flaws in this reality. “Age Of X-Man Omega #1” brings that story to a close. 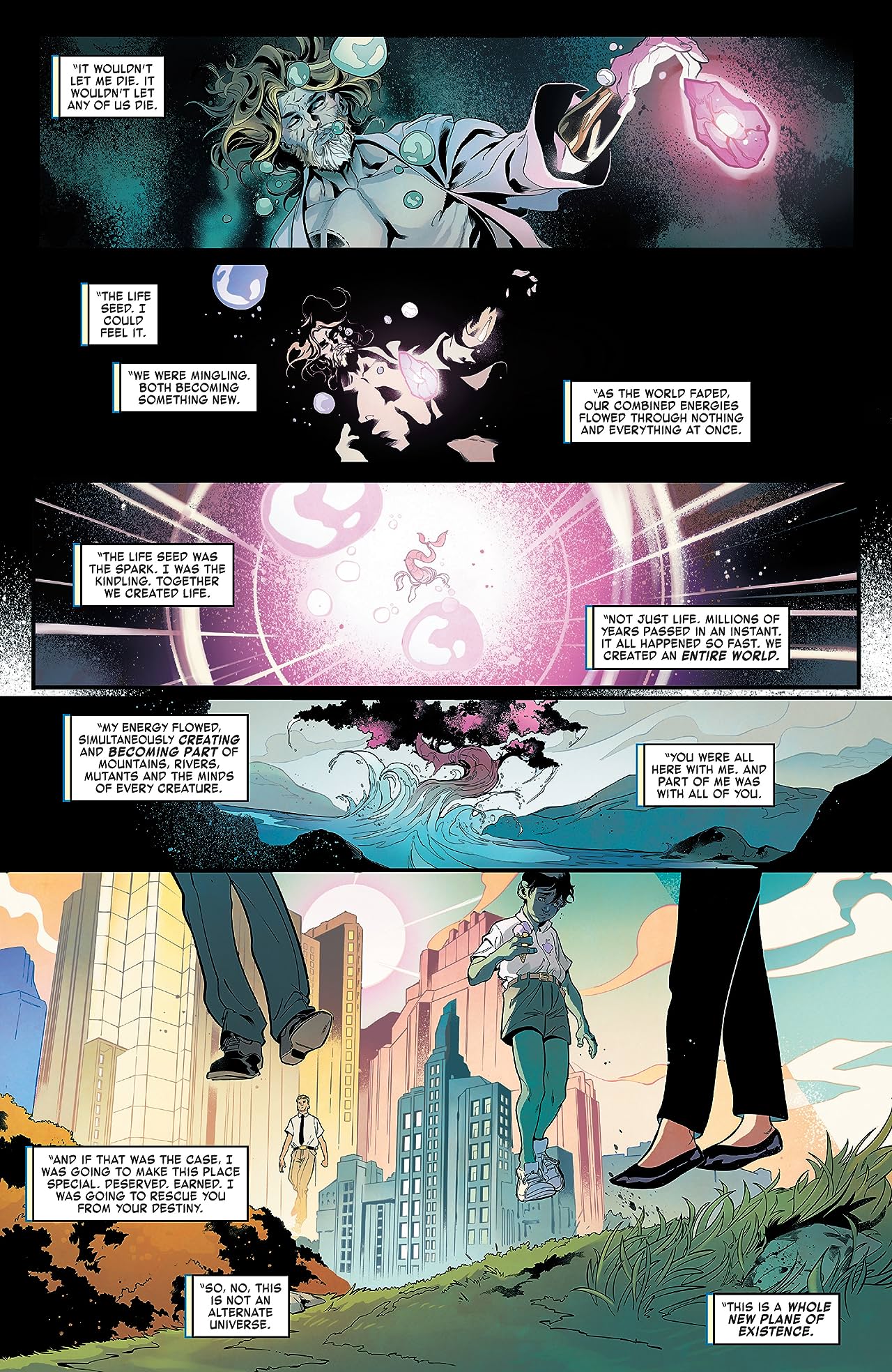 From its inception in “Age Of X-Man Alpha #1,” this world that Thompson and Nadler created has been an elaborate thought experiment. What does a perfect, Utopian world look like for mutants and the X-Men? Given the many dytopian timelines the X-Men have explored, it’s not an unreasonable question.

Over the course of multiple books that cover multiple characters and concepts, we get to explore that world and all its complexities. Thompson and Nadler go heavy on the world-building, revealing the best parts of this Utopian vision, as well as price it incurs. With “Age Of X-Man Omega #1,” the full story of this world is complete. Now, it’s up to the X-Men to decide what to do with it.

Like all Utopias, the Age Of X-man comes at a cost. On the surface, everyone is safe and happy. However, there are some dark, disturbing reasons for this. The X-Men of this world, which include the likes of Jean Grey, Storm, Magneto, Nightcrwaler, Mirage, Colossus, Beast, and Bishop, have been uncovering those reasons over the course of the series. Now, they know the full truth.

However, this isn’t just a matter of fighting the source of these harsh truths. Nate Grey is not a mustache-twirling villain. “Age Of X-Man Omega #1” goes out of its way to justify his actions and the logic behind them. In the grand scheme of things, his logic isn’t that twisted. 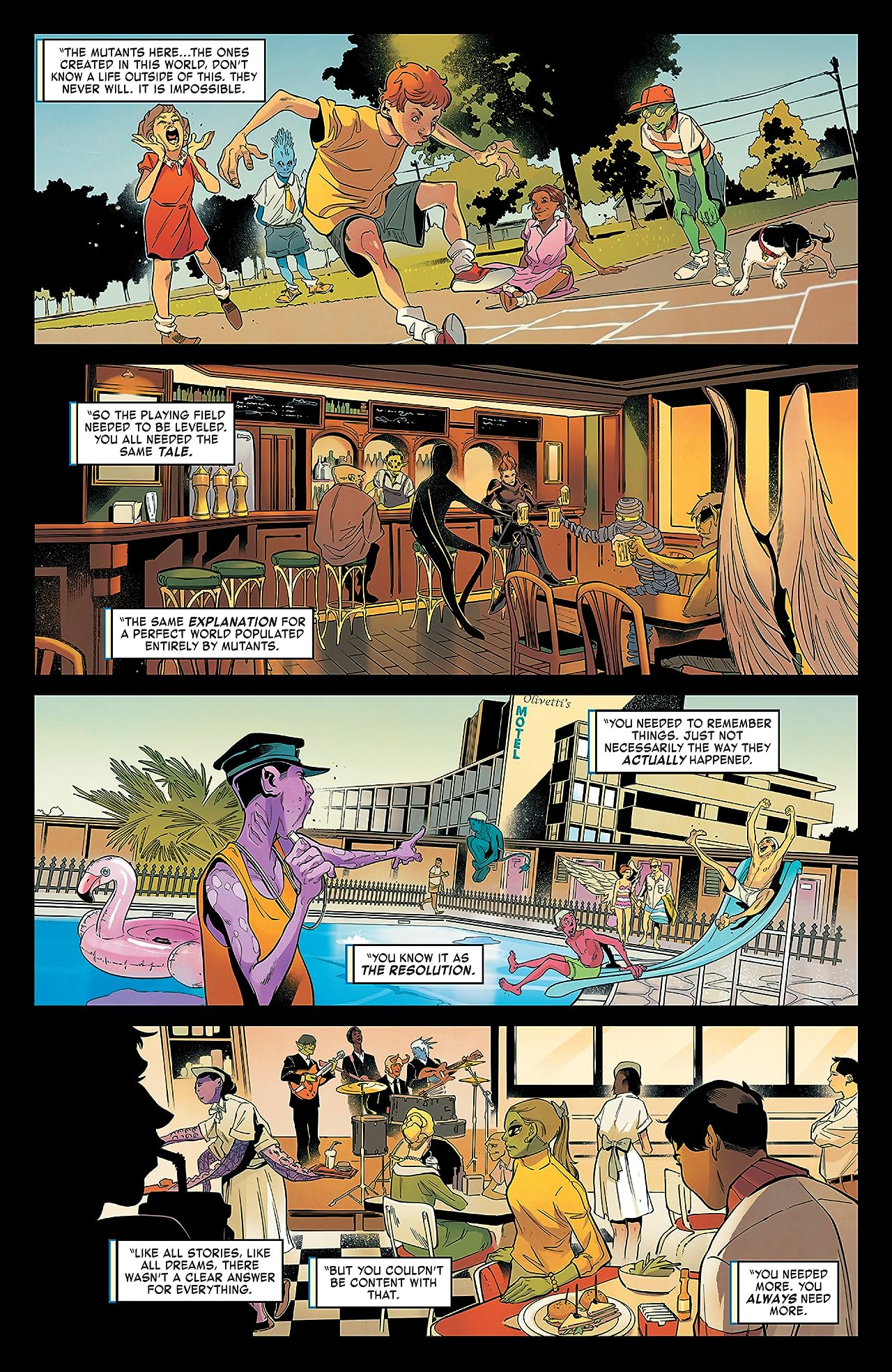 The greatest strength of “Age Of X-Man Omega #1,” as well as the overall event, is that none of the conflicts were born out of total malice. Nate Grey didn’t create this world to toy with the X-Men or get revenge. He did it because he had the power to end the never-ending struggle that only ever brings them pain and suffering.

It’s at the heart of every Utopian vision, attempting to eliminate suffering so that everyone can be happy. It always comes at a price and Nate Grey understood that price. He even goes out of his way to justify it to the X-Men as they’re opposing him. To some extent, he has a point.

He highlights how the relationships the X-Men forge have been a liability in their efforts. He points out, ironically, how some of their most human traits are the very reason why they suffer so much. His world worked to subvert that and, even though it meant manipulation and subjugation for some, it succeeded in its own perverse way. That’s exactly what makes the ultimate conclusion in “Age Of X-Man Omega #1” feel dramatic. It’s not entirely framed as the X-Men escaping from a prison or uncovering Nate Grey’s secrets. There is a final clash and it definitely maximizes Buonfantino’s talents. However, that clash doesn’t end because the X-Men defeated Nate Grey.

Without spoiling too many details of a story that has such an immense scope, I’ll note there are some powerful moments in which the X-Men and the mutants they’ve sworn to protect make some difficult choices. They’ve lived in this Utopia. They now know the price of such a Utopia. What they do with this knowledge is less about the battles they fight and more about the choices they make.

For once, there’s no army of killer robots to fight. There’s no deranged, mutant-hating villain to thwart. “Age Of X-Man Omega #1” puts the burden on the X-Men and the entire mutant population of the Marvel Universe to decide the course of their fate. Being heroes, their decisions aren’t that surprising. Even so, those decisions carry a great deal of weight.

As a final chapter, “Age Of X-Man Omega #1” caps off a bold story within an exotic world that dares to explore some weighty concepts. The idea of a Utopia is not new, but it’s a concept that still resonates in both real and fictional worlds. As long as people live in imperfect worlds, fictional or otherwise, it’ll continue to resonate.

The Age of X-Man built a story around an ideal life for mutants, free of conflict and killer robots. That story didn’t bring an end to the X-Men and their mission, but it did put it in a very different context. That, in my opinion, is an uncanny accomplishment.