Certain characters never begin their hero’s journey until they lose something they can never get back. It happened to Luke Skywalker when he lost his aunt and uncle in “Star Wars: A New Hope.” It happened to Spider-Man when his Uncle Ben was murdered by a mugger he could’ve stopped. For Dr. Strange, what he lost and where that took him is unique.

For Steven Strange, it wasn’t someone he lost. It was something. Before he became the Sorcerer Supreme, he was a gifted, but self-centered surgeon. He was a man of science and prestige. He had knowledge and skill that few could match. It afforded him wealth, respect, and affirmation the likes of which few achieve.

Then, in an instant, he lost it all. Beyond humbling him, it forced him to follow a new path. That path eventually led him to becoming the Sorcerer Supreme that Benedict Cumberbatch so brilliantly played in Marvel Studios’ dazzling adaptation to his story. He’s been on that journey for years in the comics and it has taken him to many magical places, literally and figuratively.

That does raise some interesting questions, though. What would happen if Dr. Strange suddenly got back what he’d lost all those years ago? How would regaining that precious gift he once lost affect him? This is what writer Mark Waid explores in “Dr. Strange Surgeon Supreme #1” and the implications are revealing. The circumstances of this issue and this new series spin out of recent events involving the magical sector of the Marvel universe. The details aren’t necessary to know in order to follow the story. There’s a passing reference from Dr. Strange about making a bargain with a demon to get the use of his hands back, but that’s all you need to know to follow the plot.

It’s a unique plot in the context to a Dr. Strange story. In addition to the mystical battles with demons and various Lovecraftian forces, Dr. Strange is back to being a doctor. Specifically, he’s a neurosurgeon who takes on cases that no one else is equipped to handle. Dr. Strange makes that very clear. He only gets the cases that everyone else says is impossible.

For anyone who knows somebody who has been told by a doctor that there is no hope, it’s a powerful message and one that isn’t lost on Dr. Strange. Waid even lets some of that old arrogance from Dr. Strange show, but it’s the kind of arrogance that’s understandable. He’s not just a master of the mystic arts. He has skills as a surgeon that nobody else can match. He has a right to be a little arrogant.

At the same time, he’s still the Sorcerer Supreme. He’s still the same man who went down that hero’s journey and came out a better man. Seeing him navigate a crowded hospital and its labyrinthine of bureaucracy while also fighting mystical battles on the side is compelling. It provides a unique balance that mixes real world threats with those of magic. It’s a balance that is difficult to strike in a Dr. Strange comic. One of the major appeals of Dr. Strange comics is that it doubles down on all those mystical tropes that push the imaginations of writers and artists alike. Mixing it with something as common as a crowded hospital feels like it shouldn’t fit, but Waid makes it work and the imagery provided by artist Kev Walker still gives it a magical ambiance.

That mix works because, as Dr. Strange often points out when describing magic, the byproducts come at a price. He has back what he lost and he’s still the Sorcerer Supreme. However, it’s not all operating rooms and dark dimensions. Doing both, even on a part-time basis, takes a toll on him and that toll shows. 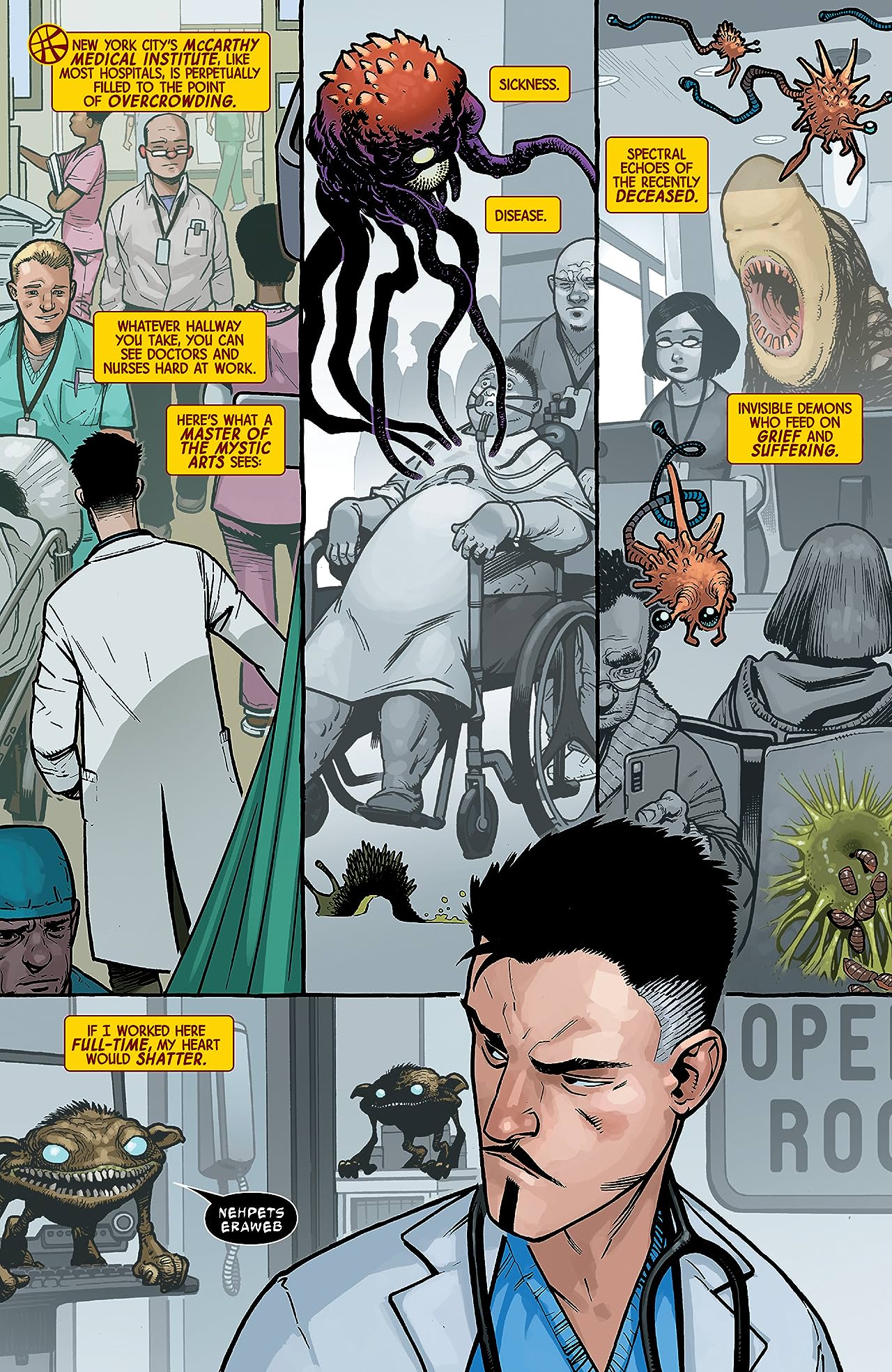 Going back to the catalyst that leads many down a hero’s journey, it’s rare for any character to reclaim what they lost. Peter Parker can never get his Uncle Ben back. Luke Skywalker can never save his aunt and uncle. However, “Dr. Strange Surgeon Supreme #1” gives Dr. Strange that rare opportunity to still be the hero he’s become while regaining what he lost.

The story never gives the impression that Dr. Strange goes back to being the arrogant asshole he was before he knew magic was real. His attitude and disposition in “Dr. Strange Surgeon Supreme #1” never feels like a regression. At the same time, there’s a clear sense that he can only push himself so far, even as the Sorcerer Supreme.

When mystic threats start to affect his non-mystical pursuits, he struggles in ways we don’t expect of a man who regularly stares down the likes of Dormammu. It reinforces the notion that magic comes at a price and so too does regaining what you once lost. Is Dr. Strange willing and able to pay that prices?

That question remains unanswered, but “Dr. Strange Surgeon Supreme #1” makes clear that it cannot go unanswered forever. At some point, Dr. Strange will have to make some difficult decisions and for once, there’s no magic spell that will make those decisions any easier.